Last summer, we spent two weeks in Alaska. The whole trip was incredible, and filled with beautiful scenery and wildlife of all kinds, but the highlight for me was the thing we planned the trip around: the brown bears of Katmai National Park. Katmai is the best place in the US – and one of the best places in the world – to see brown bears in their natural habitat (some quick trivia: brown and grizzly bears are the same species, but in Alaska the ones in coastal areas like Katmai are called “coastal brown bears,” while the bears living inland in places such as Denali National Park are known as “grizzly bears.”) In July and September, the Katmai bears congregate around a large waterfall to catch salmon swimming upstream, and bear sightings are practically guaranteed during these months. Despite its incredible wildlife, Katmai is one of the least-visited national parks in the United States, probably due in large part to how difficult it is to reach. Details about the logistics of visiting the park can be found at the bottom of this post.

Although the bears were obviously the big draw, the scenery en route was nothing to sneeze at. We flew first from Anchorage to King Salmon and enjoyed gorgeous views of the mountains and lakes between Anchorage and the Alaska peninsula.

We then rode in a floatplane from King Salmon to Katmai, which was an absolute thrill for me, since it was my first floatplane flight. The flight was very brief (no more than 10 minutes) but the water takeoffs and landings were exhilarating and we had some really nice views of Katmai’s glacial blue Naknek Lake. 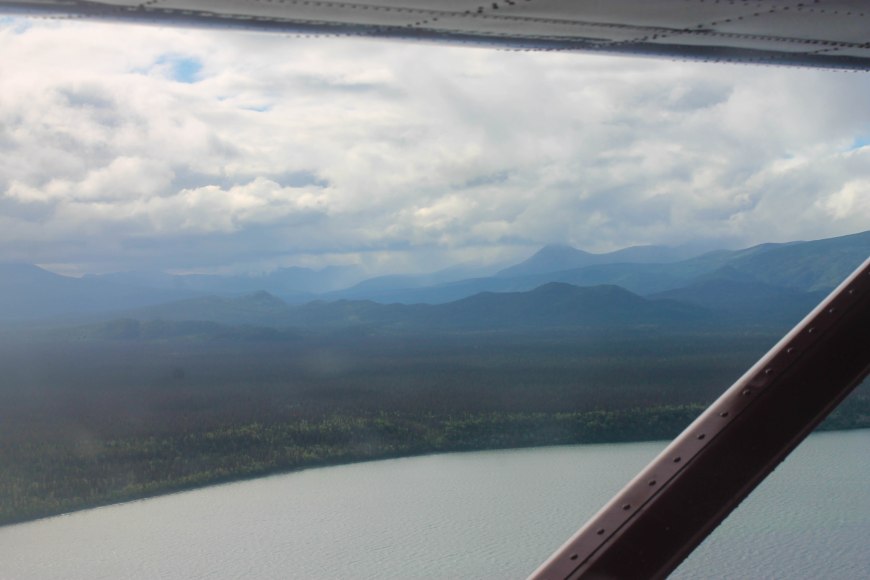 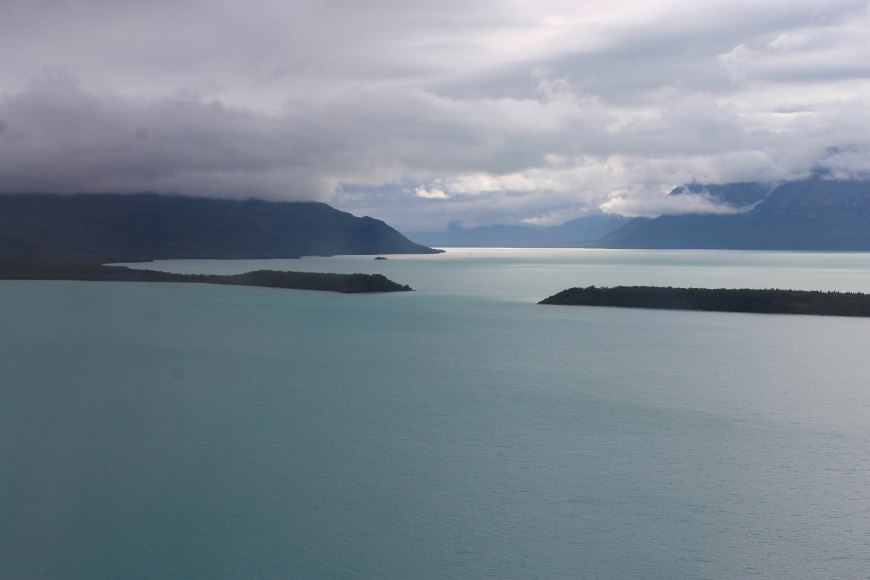 We didn’t have to wait very long for our first bear sighting. Moments after our floatplane hit the beach at Katmai, I spotted one out the window. It wasn’t very close and it was hard to take good pictures of it, but we had been in the park for mere seconds, and had already spotted the very thing we had come to see! 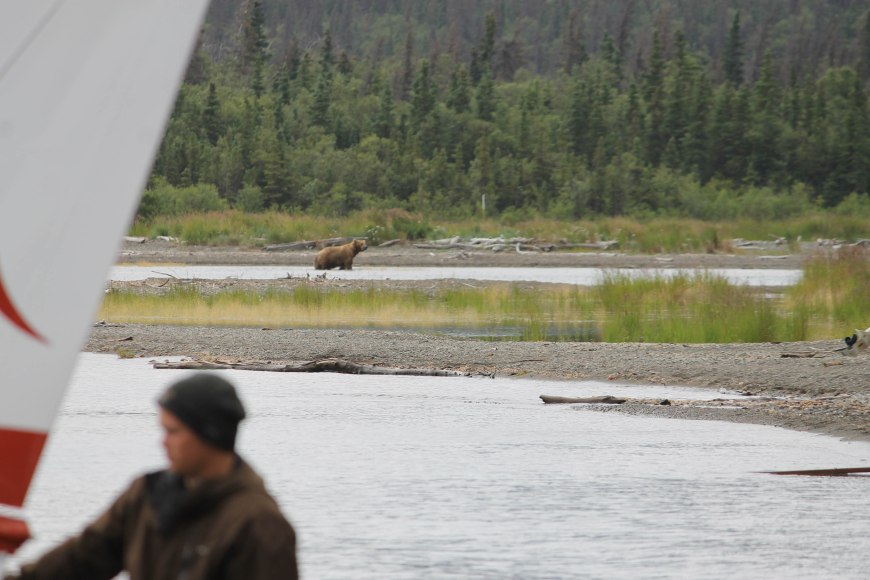 We were ushered off the floatplane and into a mandatory “bear orientation” that we would have to participate in before we would be allowed to walk around the park on our own.

I’m sure they said a bit more than this, but I really only had two takeaways from bear orientation:

In all seriousness though, as frustrating as it was to have to sit through a lecture when we wanted to get to the bear viewing, good bear safety practices are really important for the safety of both humans and bears (bears that learn to take food from humans may have to be put down, even if they haven’t demonstrated violent tendencies) and the rangers did a great job making the program entertaining while reminding us that we were in the bears’ home and that it’s important to keep wildlife wild.

After bear orientation, we were released to walk to the bear viewing platforms. The anticipation was palpable. Finally, we were going to get up close and personal with a bear! Well, not so fast. As we approached the bridge to the bear viewing platforms, we were stopped by a ranger who told us the bridge was closed because there was a bear in the vicinity. This is such a common occurrence around Katmai that is even has a nickname: a “bear jam.” Any feelings of disappointment quickly passed, however, when we realized how clearly we could see the bear and that he was swimming across the river and approaching us. 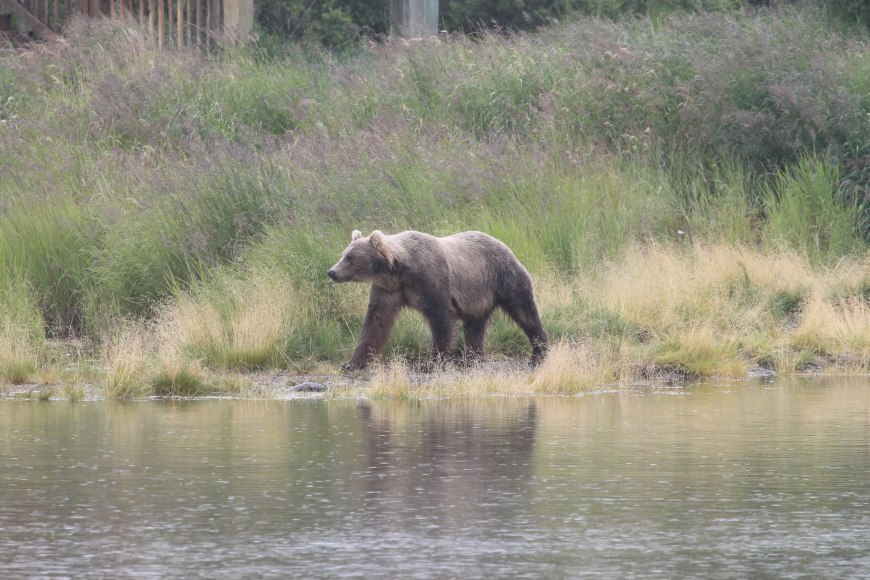 The bear eventually got out of the water on our side of the river and ambled right by the group of people waiting to cross the bridge, as if we weren’t even there. As the rangers had promised, he seemed far more interested in going about his day than having any of us for lunch. After we got across the bridge, we made our way to the popular Upper Falls platform that overlooks the waterfall. You have to sign up and wait for your turn on this platform and people are admitted for one hour at a time (once your hour is up, you can immediately sign up again). When we were first let on to the platform, there was one bear in the water right nearby, wandering around looking for salmon. Shortly after we got there, he decided he was done fishing and headed right underneath the viewing platform we were standing on, and we got some incredible close-up views. 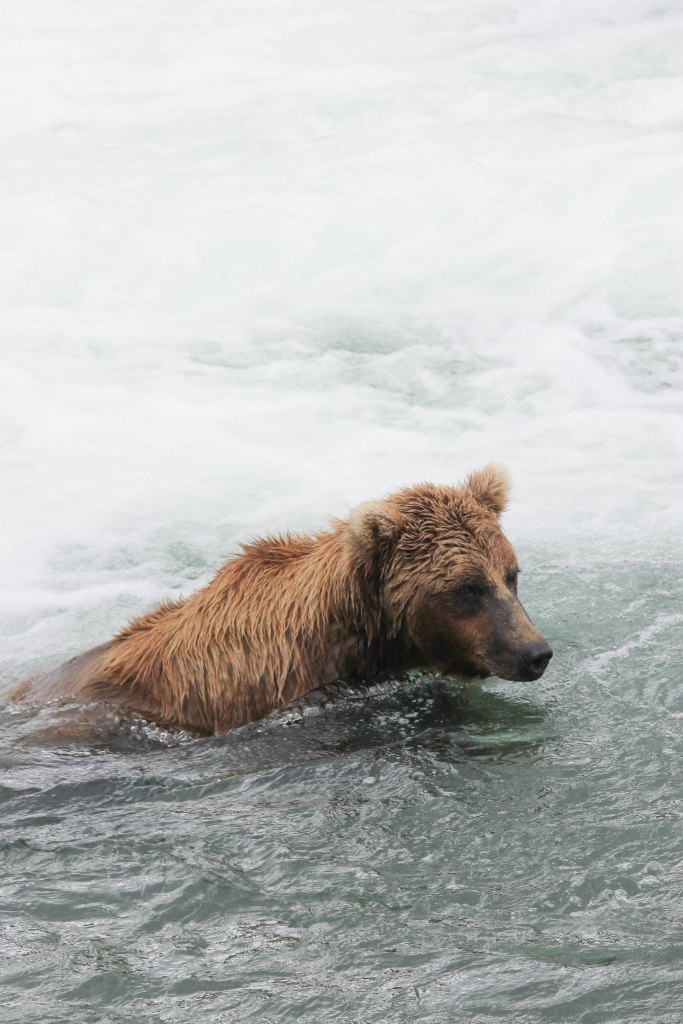 He eventually got back in the water and demonstrated the “snorkeling” technique bears use when fishing for salmon, which is exactly what it sounds like — they stick their face straight down into the water to look for fish. 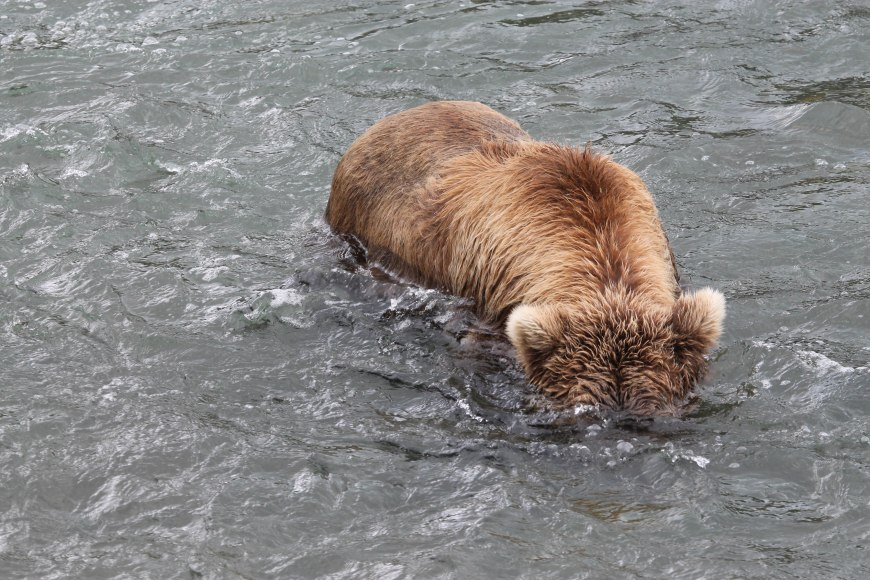 There was one bear standing right at the base of the waterfall the whole time we were on the Upper Falls platform. He seemed like he was constantly ready to pounce on his next meal, but he didn’t have much luck catching fish. 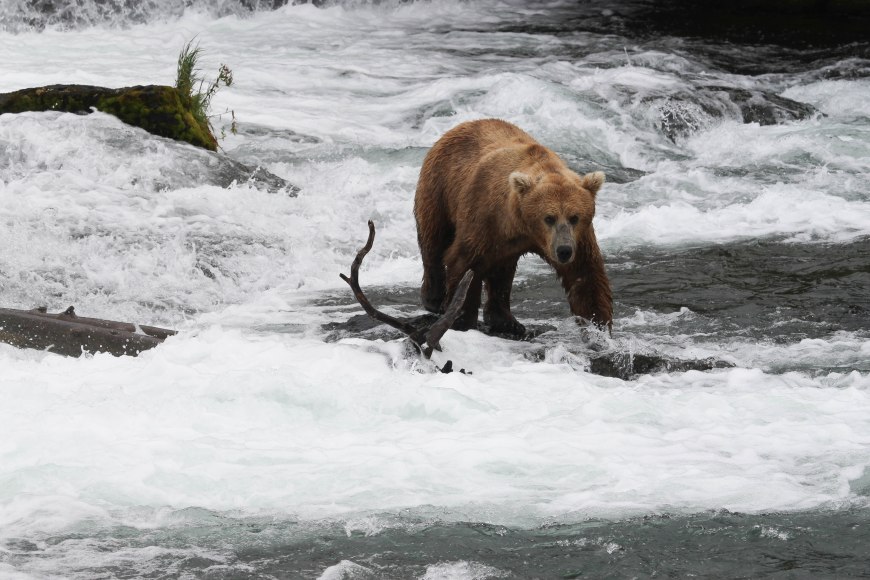 He eventually caught one and made his way over to the riverbank to enjoy his meal, before getting right back into the water to look for another fish.

When our hour on the Upper Falls platform was up, we decided to explore other areas of the park, since there weren’t a large number of bears around and we would have had to wait in at least a brief line to get back on that platform. We went to the other major viewing platform, which overlooks the lower Brooks River. Almost immediately, we spotted a number of bears wandering around. Because this platform doesn’t overlook a waterfall, there’s no opportunity to get photos of a salmon jumping into a bear’s mouth from here, but the fact that the bears aren’t all focused on fishing means there’s more diversity in their behavior. There’s also more age and gender diversity in this area, since the waterfall is primarily frequented by dominant adult male bears. 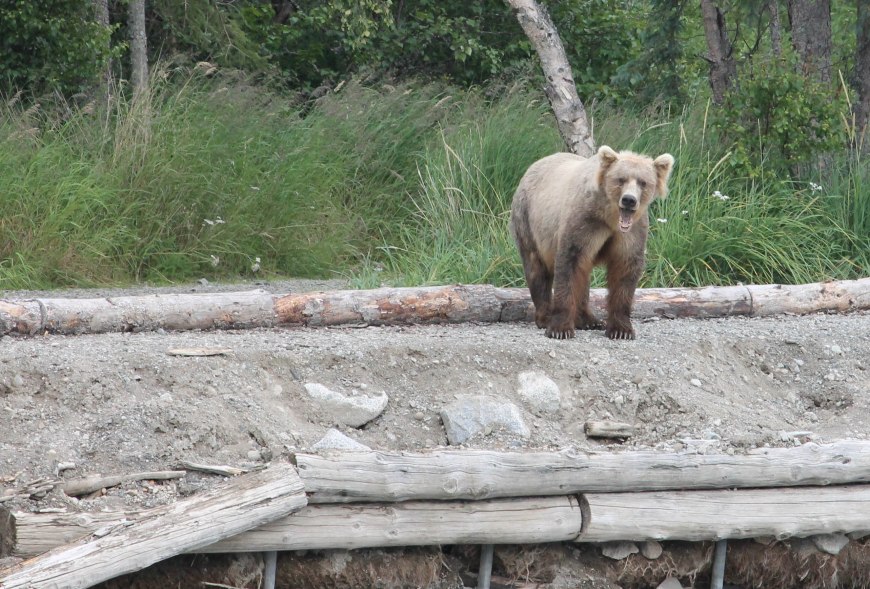 In fact, we hadn’t been at the lower platform for very long at all when we saw a bear emerge from the woods followed by two tiny cubs! They were cubs of the year, bears born that spring that had only left the den for the first time a few months before. The rangers told me that the lower river platform is the best place to see mama bears with young cubs, because the mothers want to keep their cubs away from the large, adult male bears that fish at the falls.

Mama bear seemed especially nervous and overprotective and the rangers told us she was likely a first-time mom based on her demeanor.

Her family retreated into the woods and we thought we had seen the last of them…until a few minutes later, when they emerged from the woods right near our viewing platform, and eventually walked directly in front of us!

As they walked directly in front of the platform, mama bear looked right at me and I got some great close-up photos of her and her young cubs.

She led the cubs down a road and to a gravel spit where we watched them play and fish for salmon for a while longer. 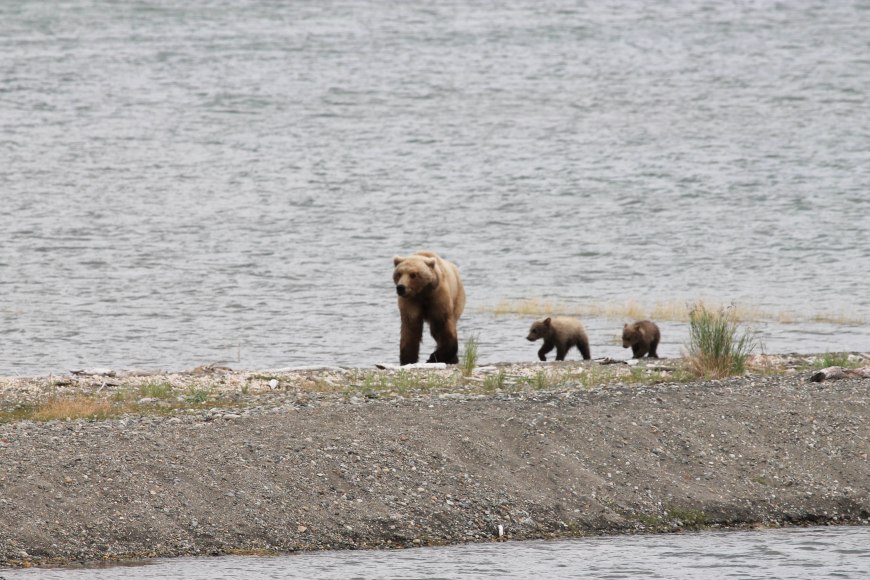 Eventually it was time to bid farewell to the bears, but the photo opportunities were far from over. On our flight home, we flew through Lake Clark Pass over Lake Clark National Park. The flight was bumpy and a bit scary (given how close we were flying to the granite face of the mountain, and how much closer we seemed to get with every bit of turbulence), but there’s no denying that the views were gorgeous.

All in all, it was a thrilling and very memorable day and I’m already daydreaming about seeing bears in the wild again. I highly recommend adding Katmai to your itinerary if you’re planning a visit to Alaska. If you can’t visit in person but still want to learn more about these incredible animals, check out the “bear cams” at explore.org. During peak bear season, you can watch live footage of the bears all day long on these high-resolution webcams.

Planning a trip to Katmai? Here is some information about getting to the park that may be useful: