When we were planning our honeymoon in Greece, we got conflicting advice about Athens. Some people told us it was a dirty city that should be skipped entirely; others told us we absolutely had to visit. In the end, we decided we couldn’t go to Greece and not see the Parthenon, but we wanted to spend most of our time in the islands, so we worked out an itinerary that gave us two days in Athens before heading to Santorini and Mykonos. We ended up using one of those days for a day trip through the Greek countryside to the ancient city of Delphi (more on that soon), leaving us with only one day in Athens itself, but we still managed to see the city pretty well. While I liked it much more than I expected to, and certainly wouldn’t have minded an extra day or two there, it was the right decision for us to breeze through quickly, given that our whole trip was only about 10 days and we wanted to spend most of our time in the islands.

We stayed at the Plaka Hotel, a fairly modest hotel in the Plaka neighborhood. The breakfast was nothing special and the service was borderline rude, but the rooms were clean, comfortable and cheap, and it was in the perfect location from which to accomplish efficient sightseeing of Athens. Plus, we could see the Acropolis out of our window, and the hotel’s roofdeck had absolutely incredible views of it. 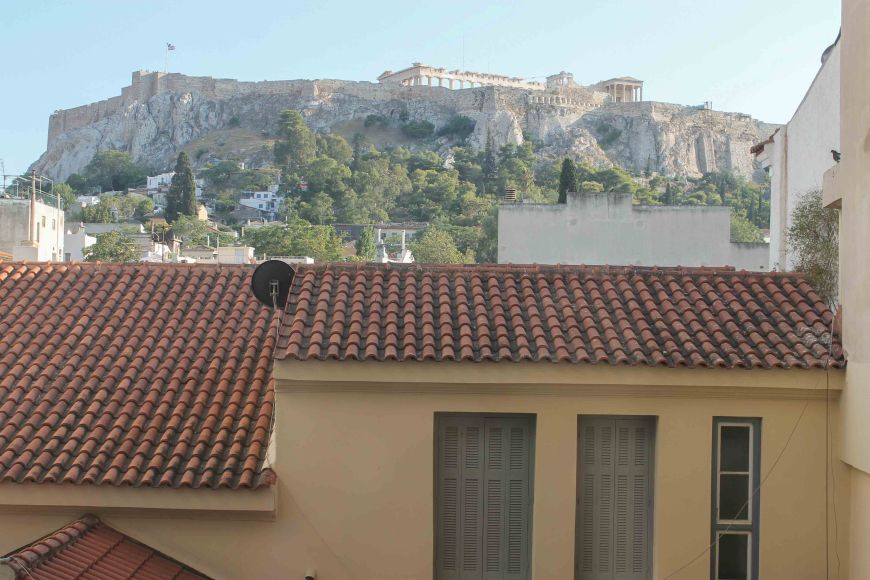 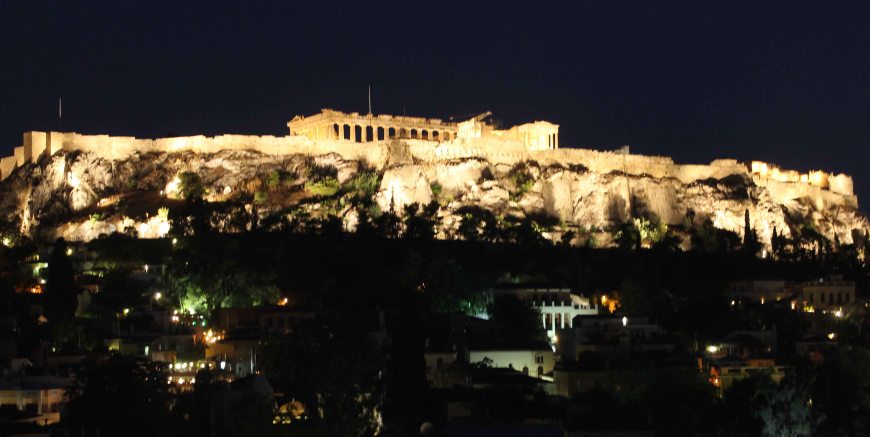 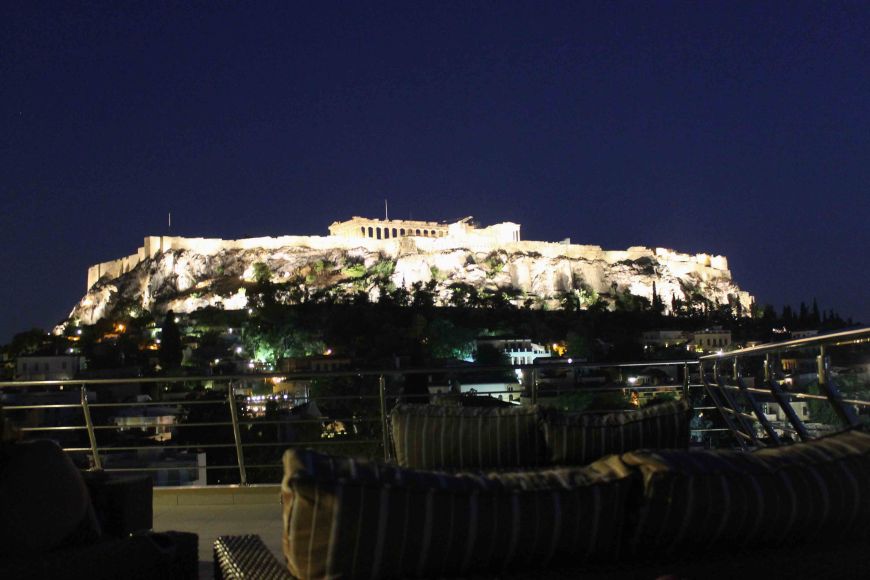 Our first day we arrived in the late afternoon, with just enough daylight left for a stroll around the charming Plaka neighborhood, which seems to have views of the Acropolis at the end of every street. 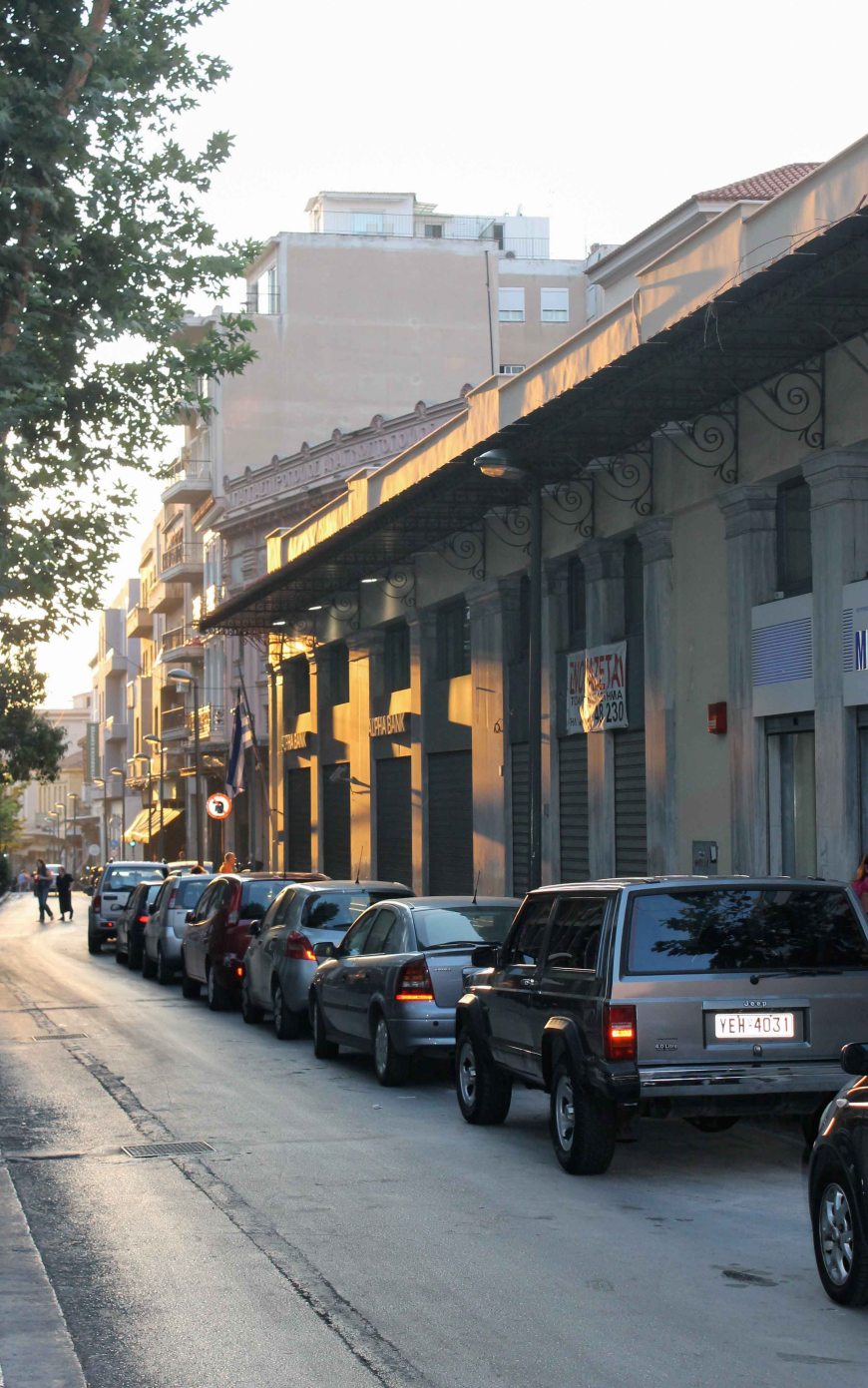 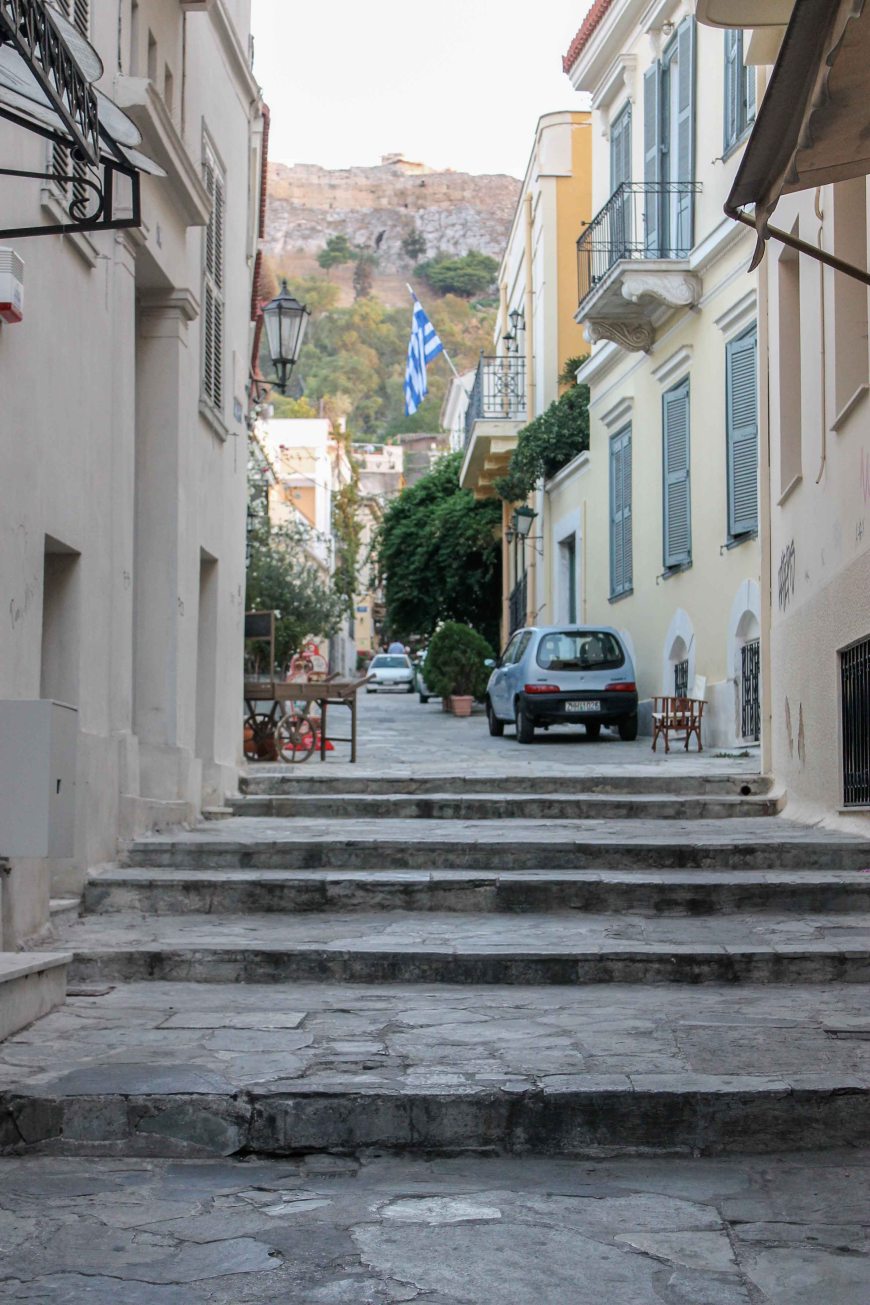 After a lovely sunset and some great Greek food (moussaka and saganiki, of course) at a nearby restaurant, it was off to bed so we could get an early start the next morning, our only full day in Athens, and beat the crowds and the heat to the Acropolis. 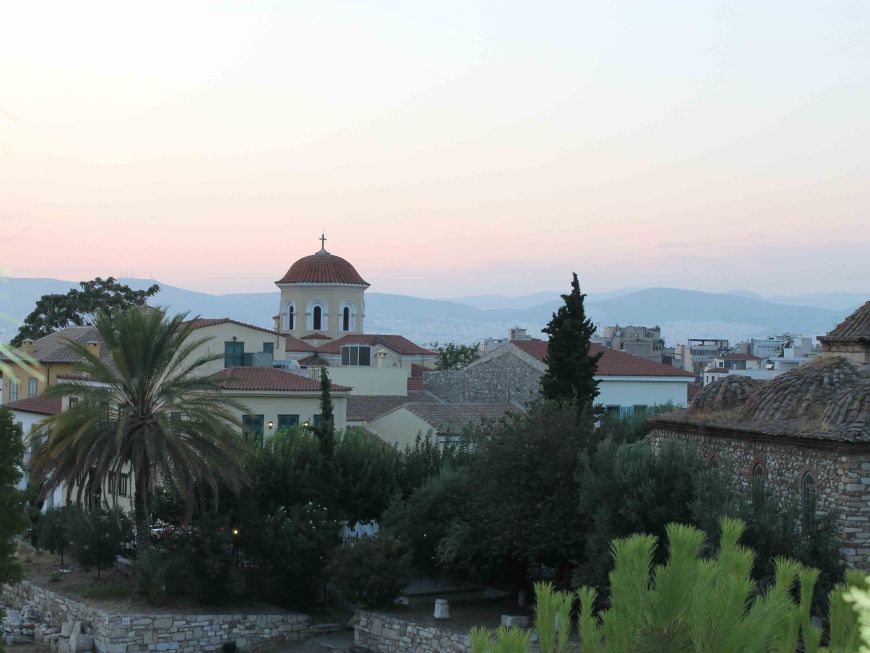 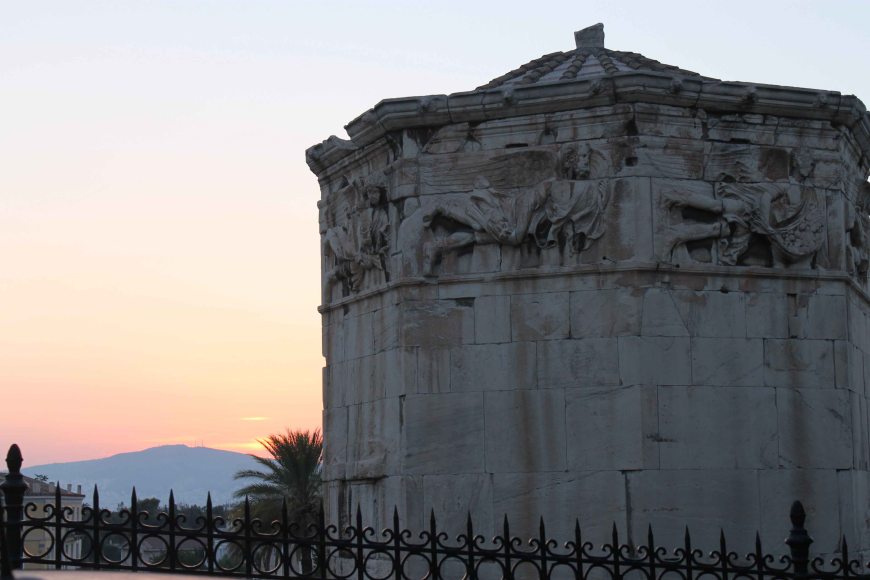 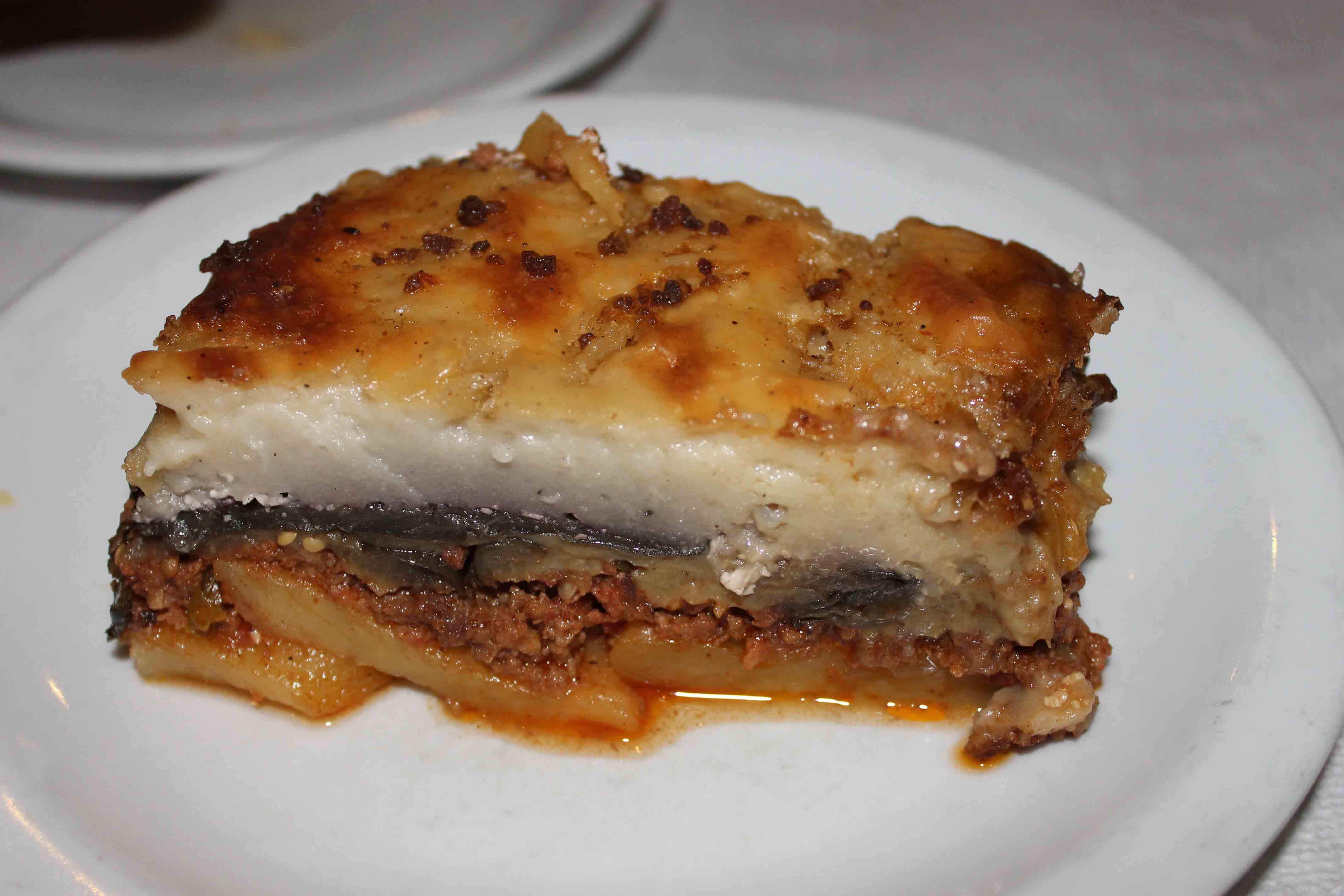 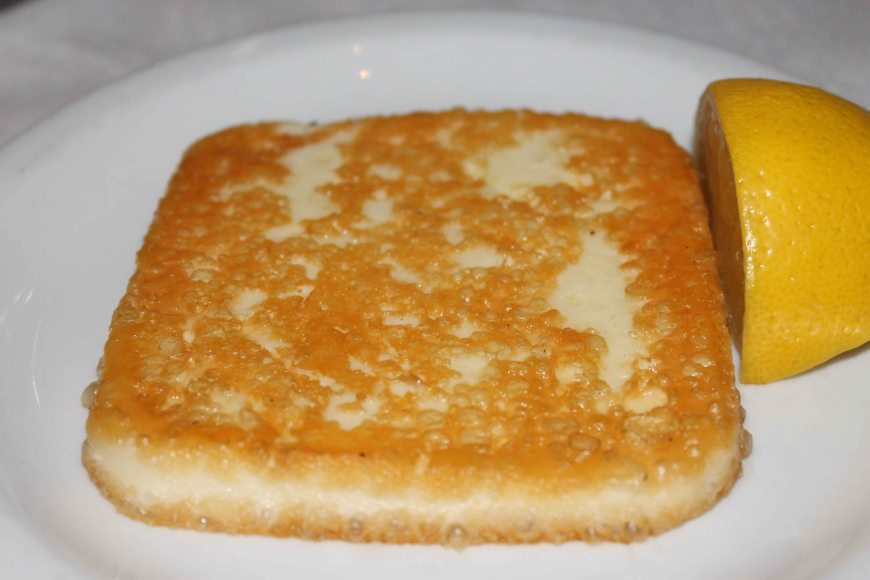 Well, in theory at least. Even though we’d slept on the redeye to Europe, taken a nap on some super comfortable chairs during our long layover at Heathrow Airport, and gone to bed at a very reasonable hour, we slept for about 15 hours straight and woke up after noon the next day. (This is pretty much what I would do every day if I didn’t set an alarm clock, but it’s unheard of for my husband, who never sleeps for more than nine hours straight unless he’s sick). Jetlag (and post-wedding exhaustion) does strange things to a person. Fortunately we were just about a ten minute walk from the Acropolis, and got over there quickly, even if it was in the oppressive mid-day heat. It was a long, hot walk to the top, but the views were well worth it. 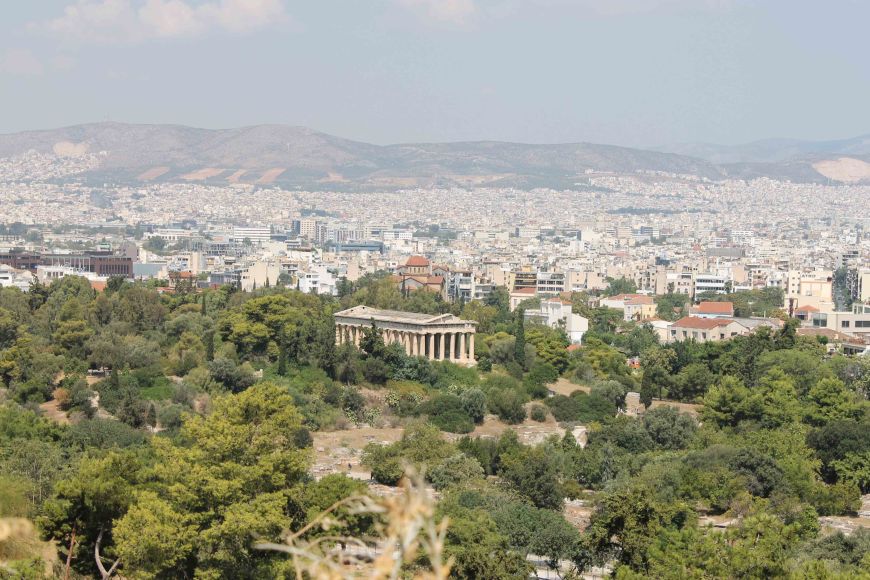 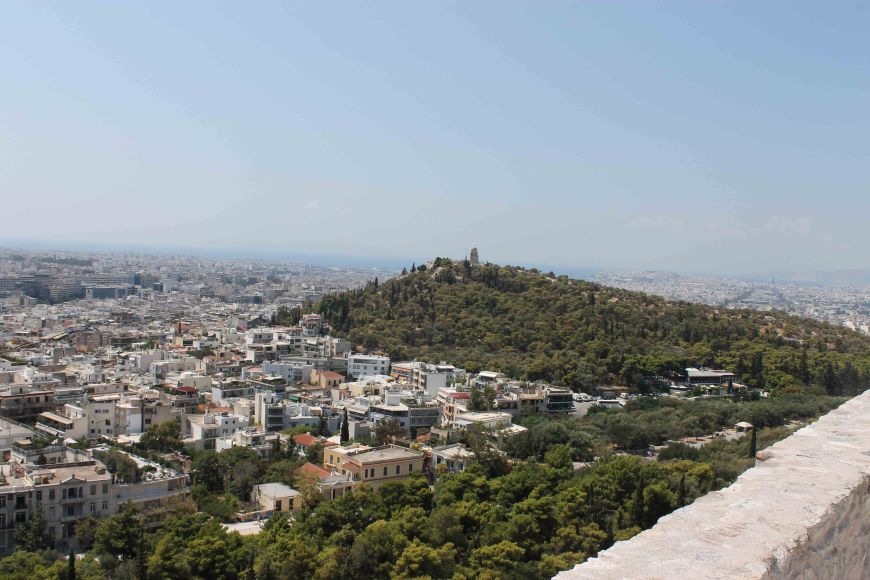 The Parthenon itself was very much under construction (a project that began in 1975 and is still not over!) and it was disappointing how much the cranes and scaffolding marred the view. Still, I’m glad we got to see it and we managed to get a couple photos with minimal evidence of the construction, thanks to careful framing and cropping. 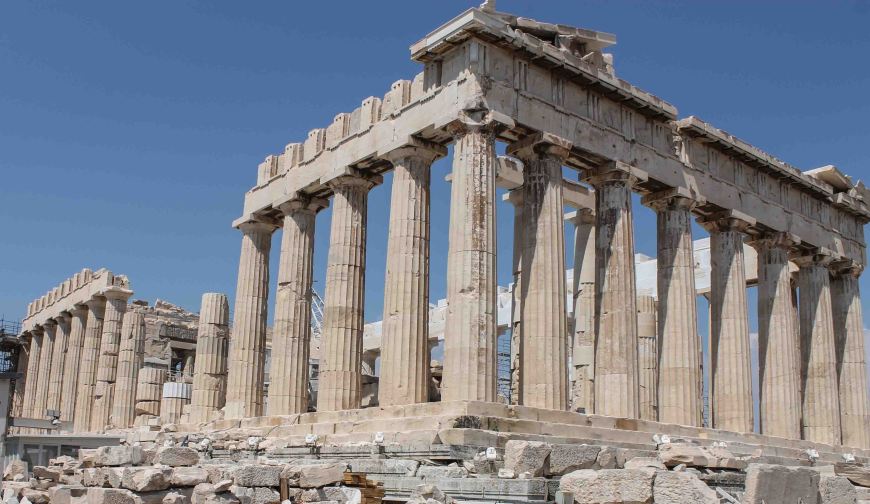 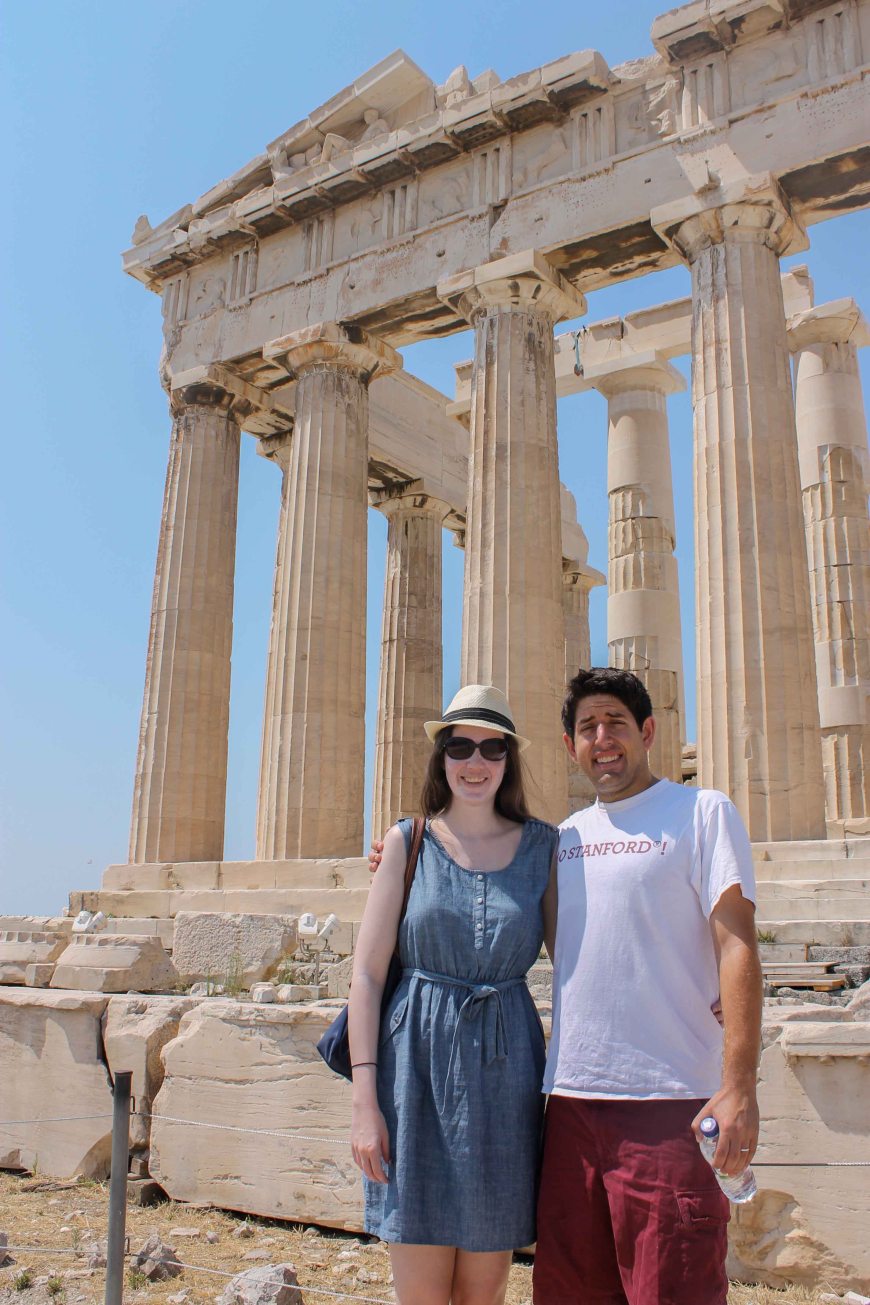 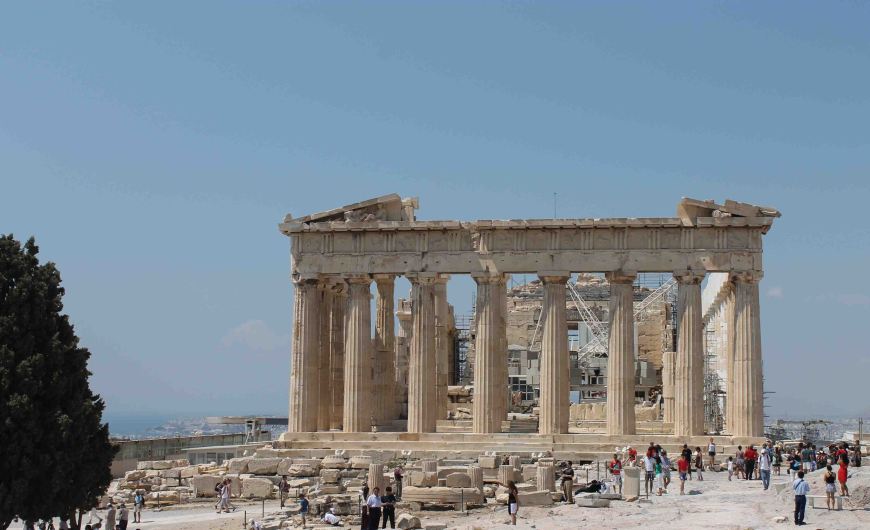 There are a lot of other ancient buildings on the Acropolis besides the Parthenon. One of my favorites was the Temple of Athena Nike. 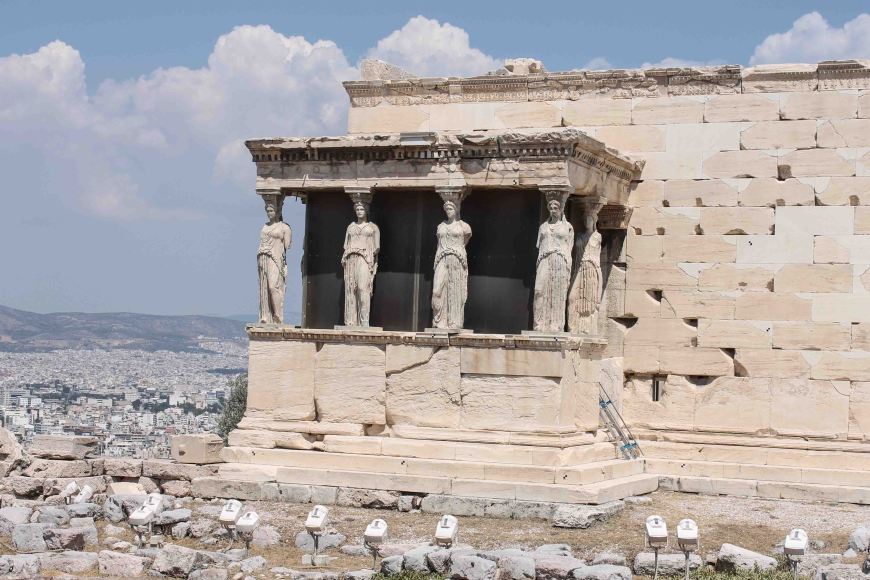 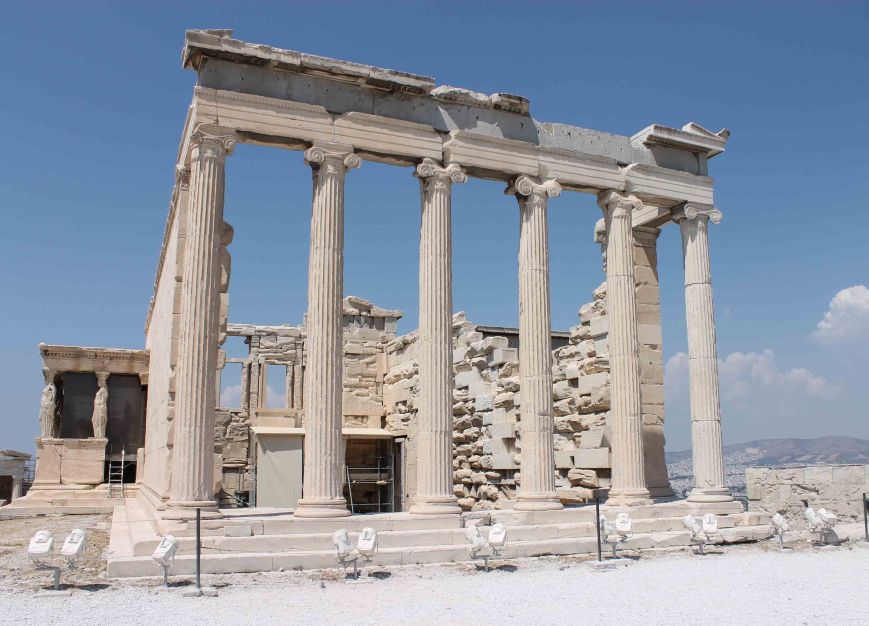 On our way down from the Acropolis, we visited the Agora of Athens, which has more ancient sites, including the Temple of Hephaestus. This might be my favorite of the ancient Greek buildings we saw, because it’s so well-preserved. 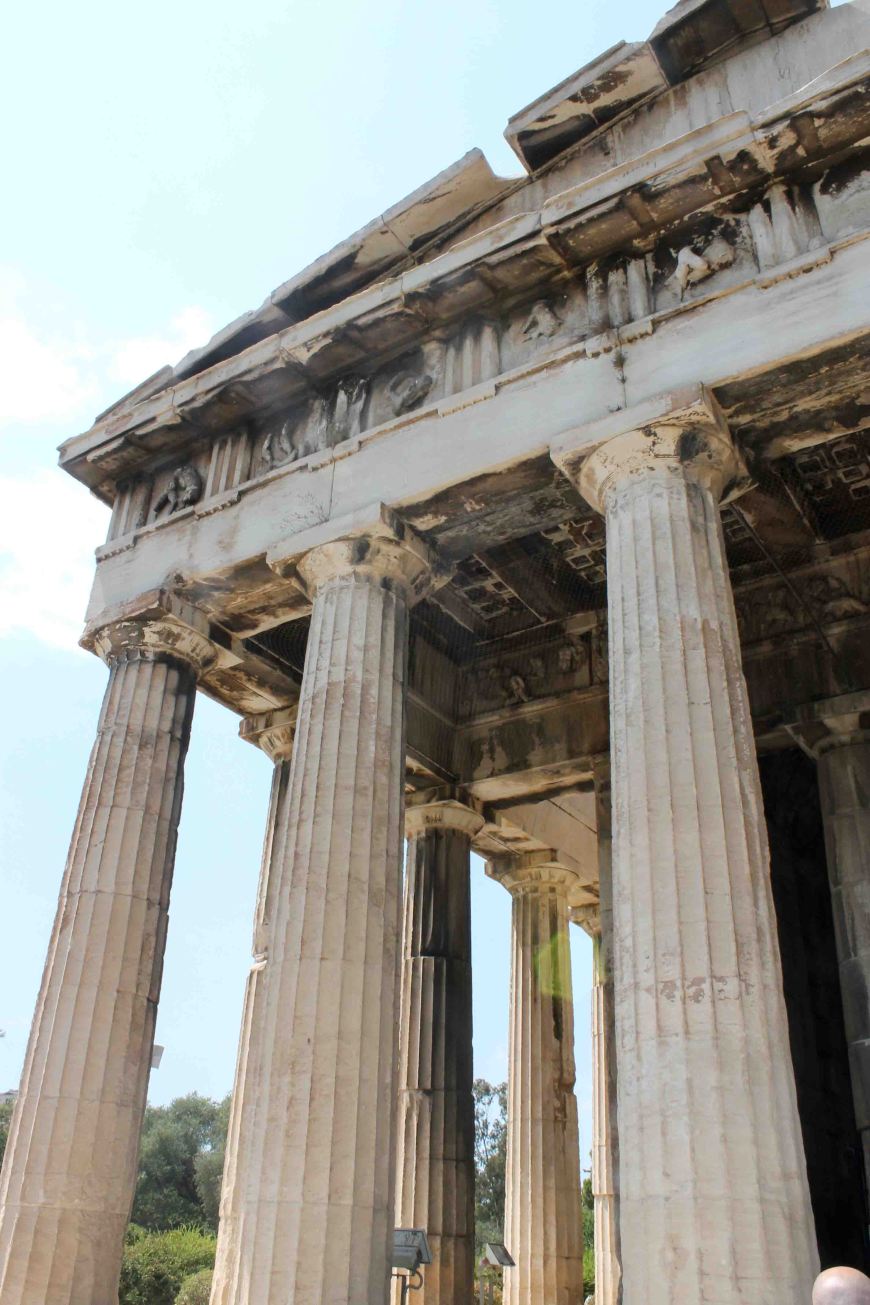 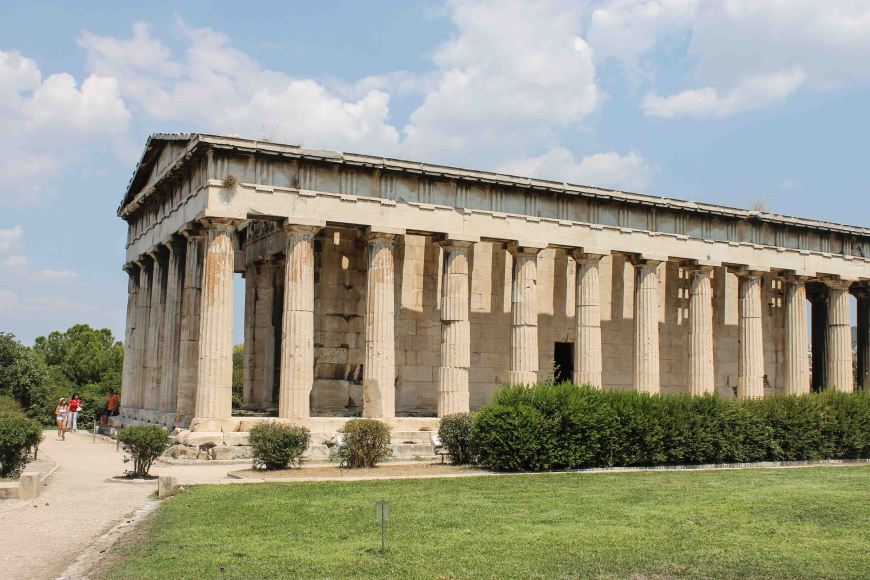 We had a late lunch at a little stand on Adrianou Street (I only remember the name of the street because it’s basically the Greek version of my name). It was the best souvlaki I’ve ever had in my life and my two euro gyro (with french fries in it, San Diego burrito style) was amazing. We had good food in the islands too, but this was definitely our best meal in Greece, and probably the cheapest too. 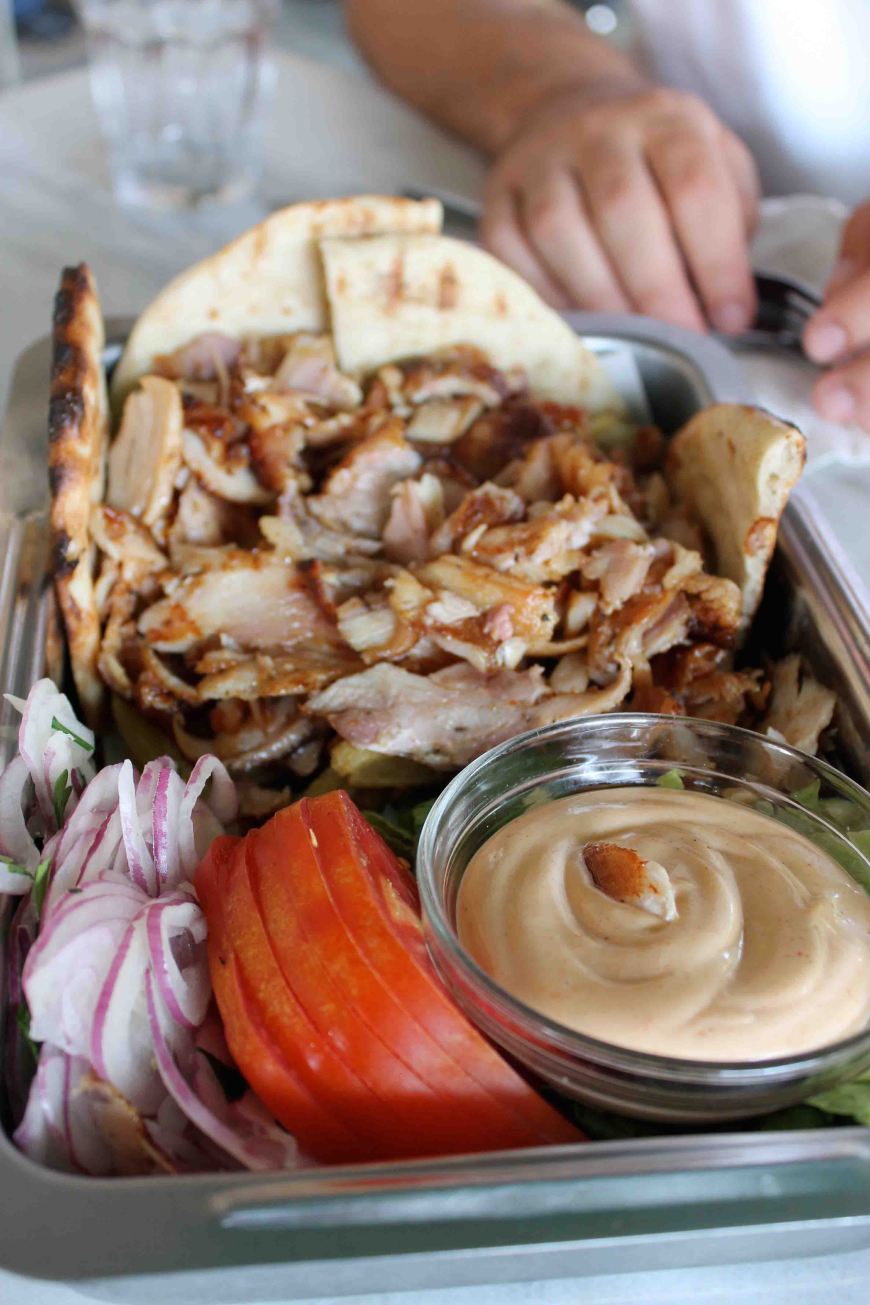 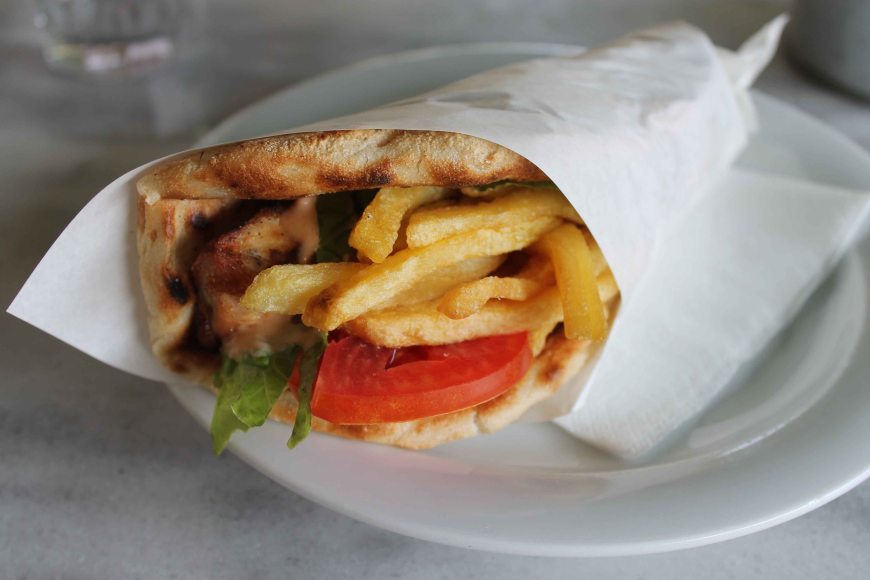 After lunch we headed to the Acropolis Museum, which we’d heard was the one can’t-miss museum in Athens, and which is conveniently located right in the same neighborhood as the Acropolis. I’m not a huge fan of museums in general, but I enjoyed this one. It was entirely focused on the Acropolis, so it was a very appropriate place to go after touring the Acropolis itself, and there was enough there to pleasantly fill an hour or two, but not so much that we felt obligated to stay longer. 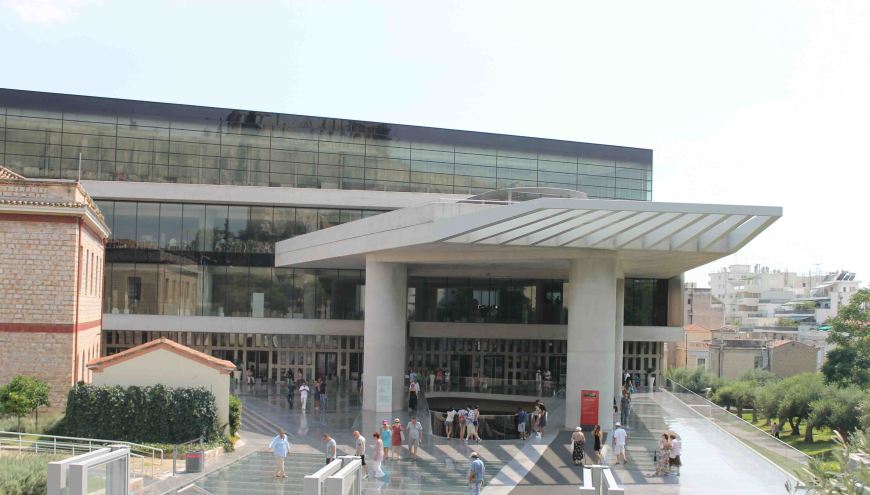 The museum is built on top of an excavation of an ancient Athens neighborhood. Understandably, this caused some controversy, but, after visiting, I think that the museum (which is built on stilts above the excavation) is a really nice way to preserve the ancient city and give visitors an opportunity to learn about it. 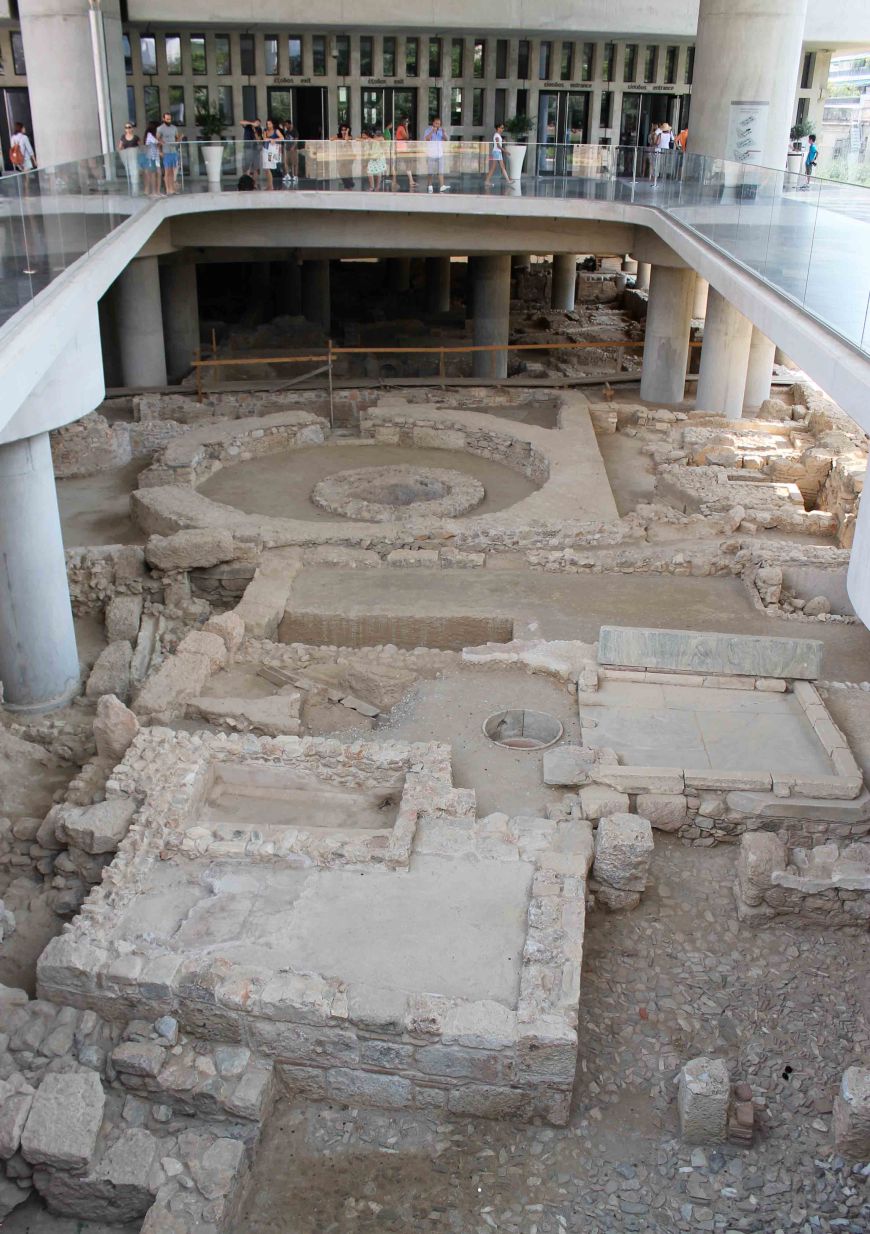 Another (also controversial) highlight from the museum was their collection of some of the 92 metopes (marble panels) from the Parthenon. The rest are the “Elgin marbles” that are currently in the possession of the British Museum. The Acropolis Museum had white plaster casts to represent the pieces in Britain, and made it clear in no uncertain terms (quite compellingly, I might add) that all the Parthenon marbles rightfully belong to Greece and should be returned. Apparently one of the arguments that Britain has made against the return is that Greece has no place to properly display them, and the Acropolis Museum is certainly rebutting that argument. 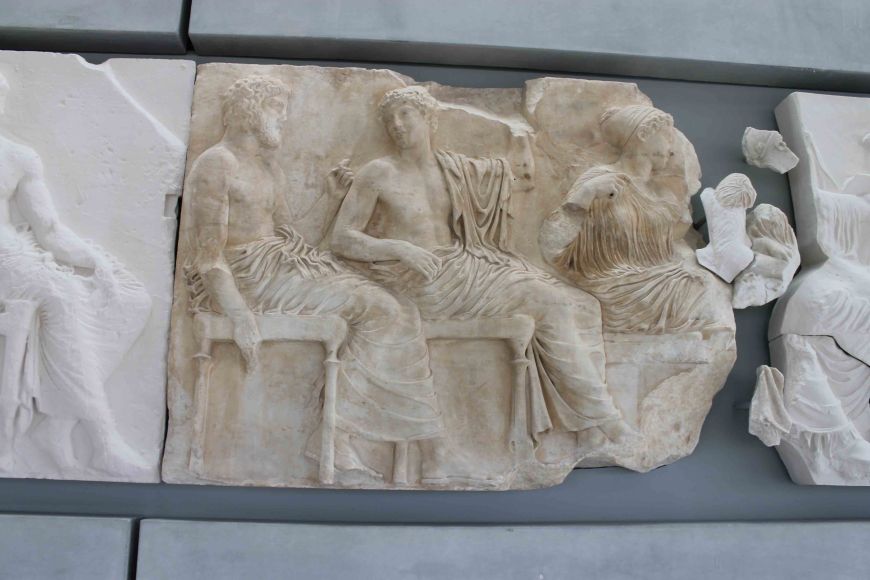 We strolled though the famous Syntagma Square and saw the Greek parliament on our way back to our hotel. Our trip was during the debt crisis and there were major anti-austerity protests in Syntagma Square shortly before our visit, but all was thankfully quiet when we were there. 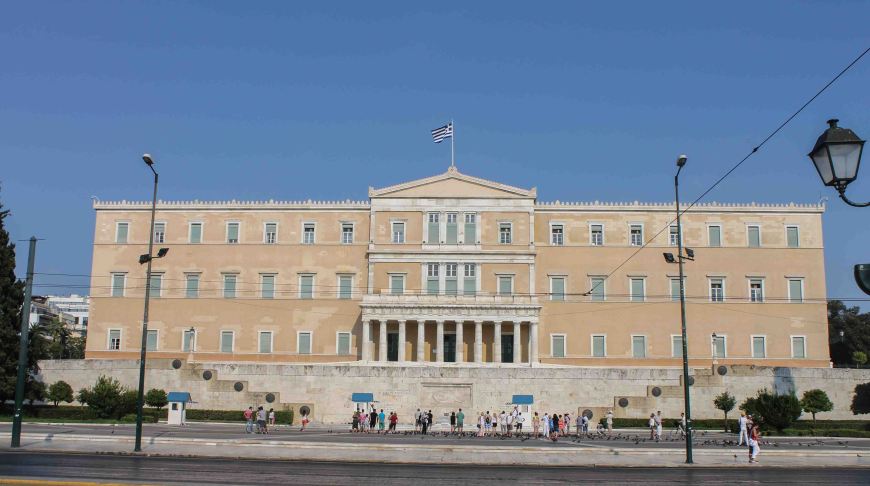 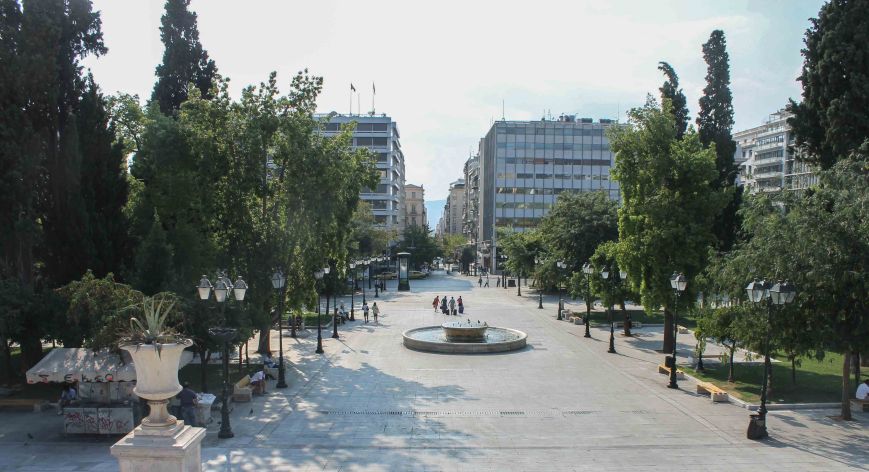 Back at the hotel, we enjoyed one final sunset from the roofdeck (and more views of the lit-up Acropolis) before turning in for the night to rest up for our next adventure. 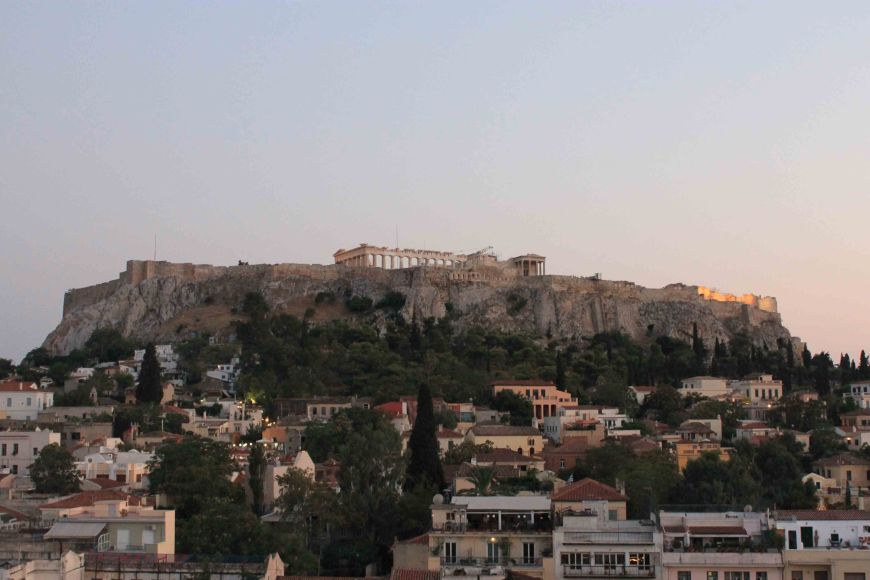 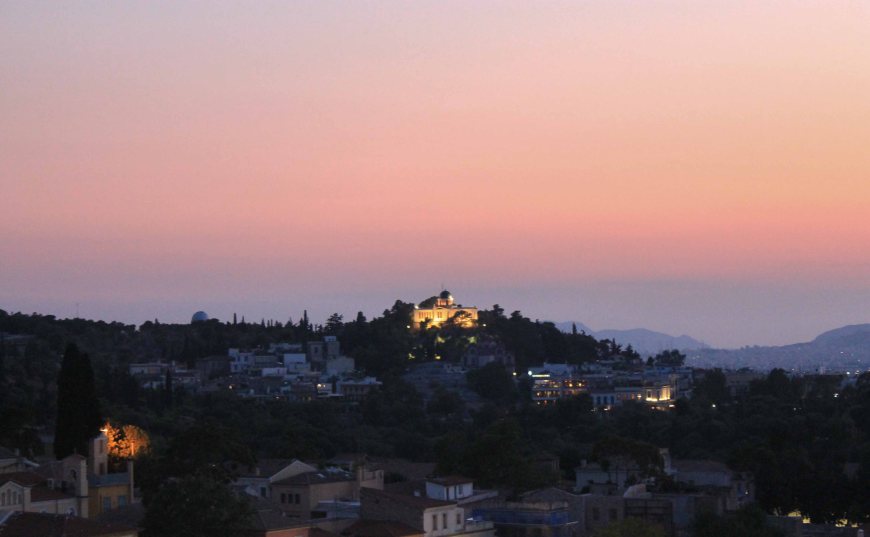 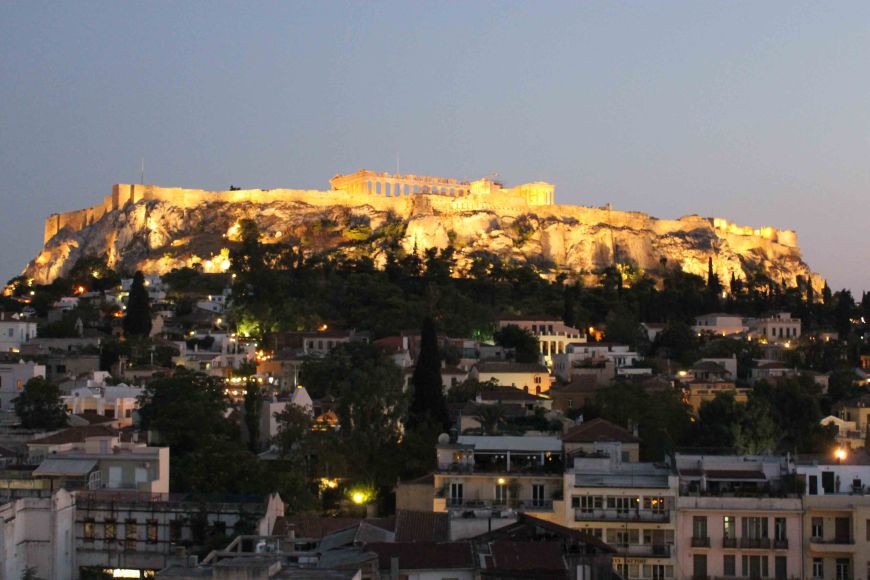 As I said earlier, I enjoyed Athens and wouldn’t have minded more time there, but I thought we packed a lot into ~24 hours and were able to see the city pretty well with the limited time we had. It helped that the major attractions are all in one neighborhood, and we were able to stay in that area.

3 thoughts on “Making the Most of One Day In Athens”