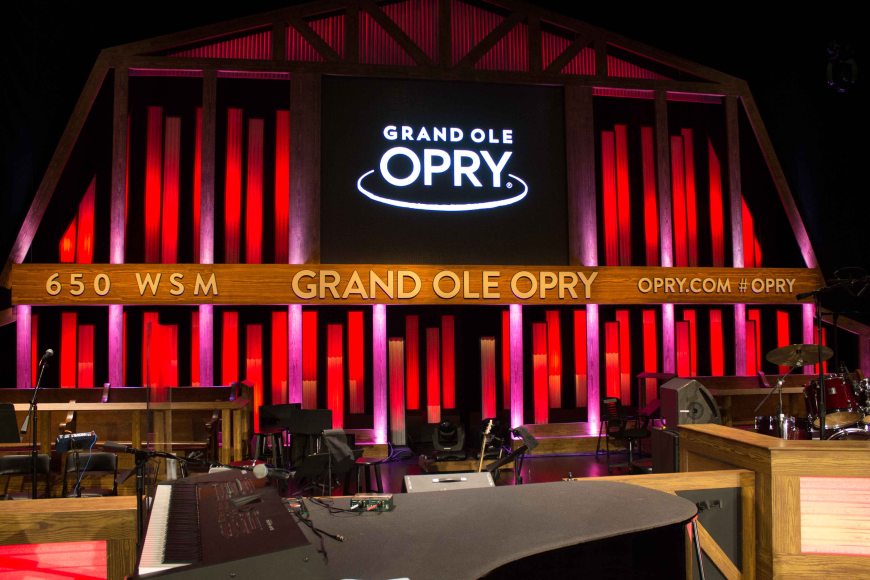 Eating wasn’t the only goal of our Nashville trip. It isn’t called Music City for nothing, after all, and since I love country music, seeing a Grand Ole Opry show was on my “must do” list for our visit. 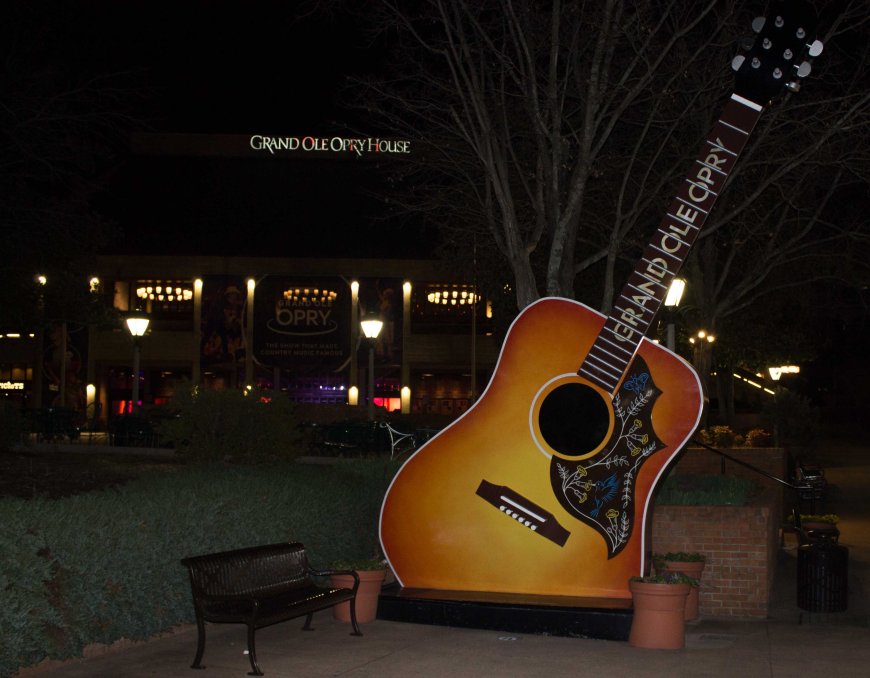 The Grand Ole Opry is a weekly live radio performance that is the world’s longest-running radio show. It’s currently broadcast from the Grand Ole Opry House, which isn’t that impressive from the exterior (it’s located in a mall on the outskirts of the city), but is a lovely venue once you get inside. 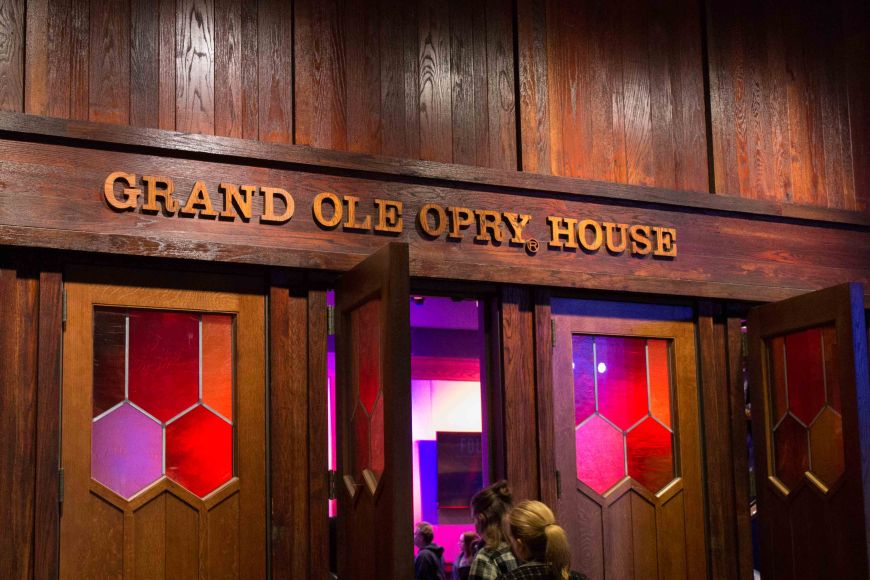 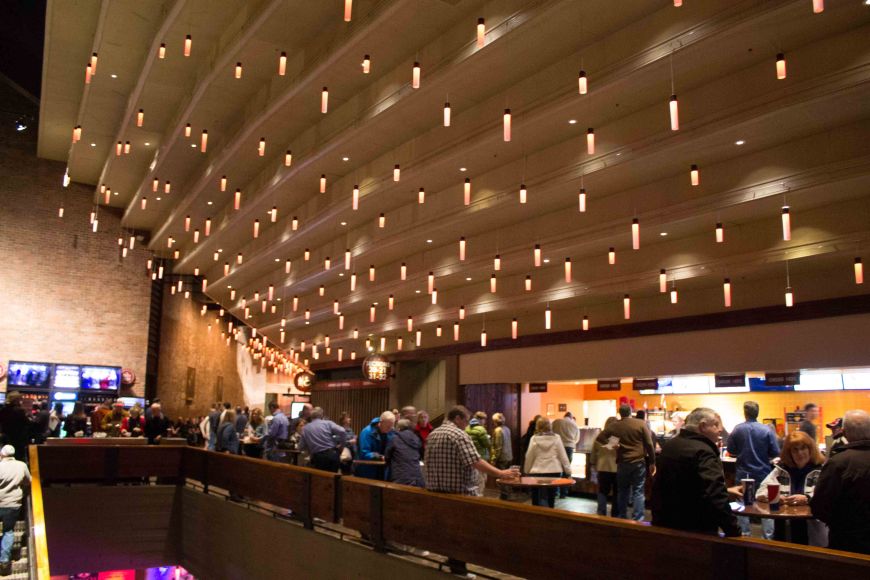 An Opry show lasts for four 30 minute segments and each segment features three performers, which means each artist (even the big names) only performs a handful of songs and the show has a great deal of variety. We had nosebleed seats but thanks to the relatively small size of the Opry House and the tiered seating we were still able to see the stage pretty clearly. Although hitmakers like Brad Paisley, Carrie Underwood and Keith Urban are all Opry members who appear there regularly, there was no current megastar playing on the day we went, but the show was still a great deal of fun. Mark Wills and Diamond Rio (who both had a hit or two on the radio when I was in high school) performed, as did classic country stars I hadn’t heard of before but was very glad to be introduced to, like Connie Smith, Ricky Skaggs and Larry Gatlin. Finally, Old Crow Medicine Show brought the audience to their feet at the end of the show, playing their hit “Wagon Wheel.” 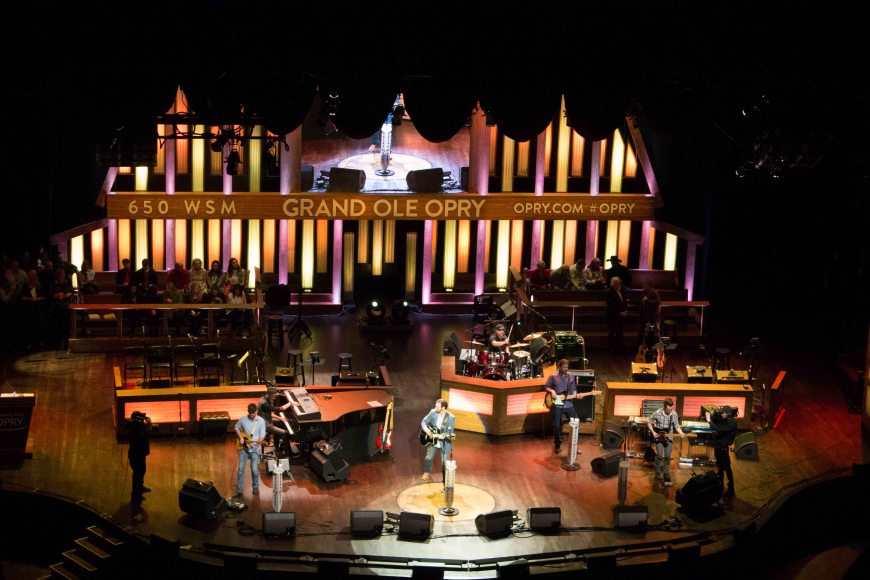 We stuck around afterwards for a backstage tour, which began almost immediately after the show ended. After watching a brief video of famous Opry moments, we started our tour at the security desk, where the artists check in before the show. 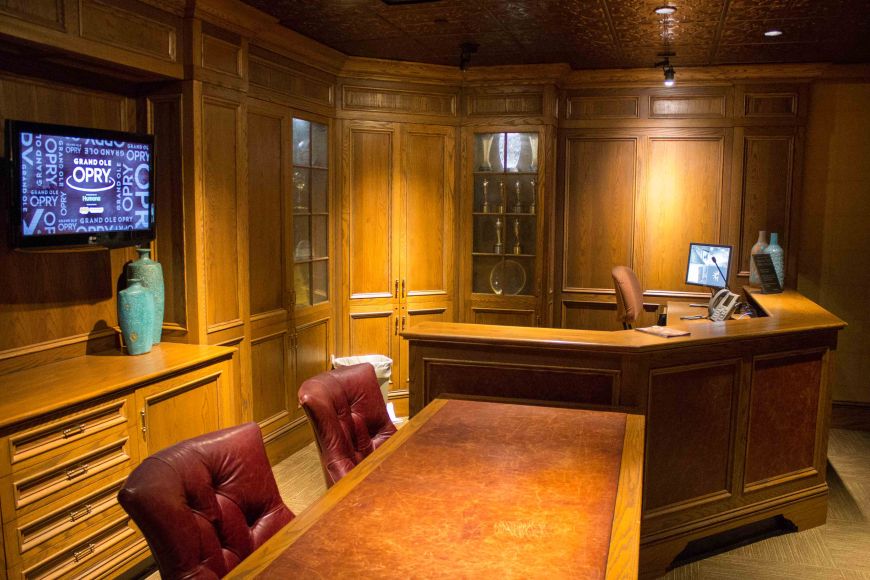 Each Opry member has their own mailbox here. At this stop, we also learned a little bit more about how artists are admitted to the Opry. Members are chosen by the show’s management, but it’s not merely an honor; as our guide explained, the Opry is essentially a living museum, and each member must commit to maintaining it, including by agreeing to play there at least 10 times per  year (for nominal pay). 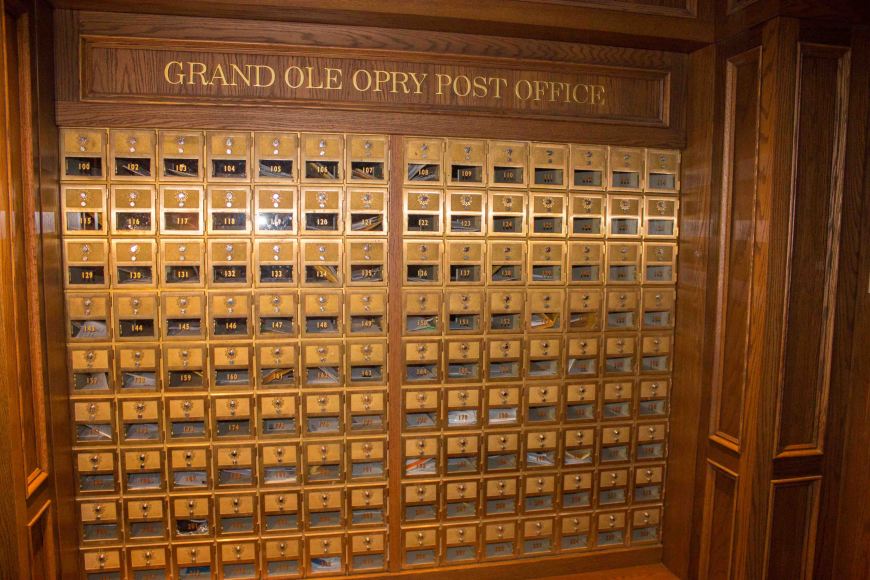 Next up, we were shown the dressing rooms used by the artists. Each of the Opry dressing rooms has a specific theme, such as Women of Country or It Takes Two (which honors the great duos of country music like Johnny Cash & June Carter and Conway Twitty & Loretta Lynn). 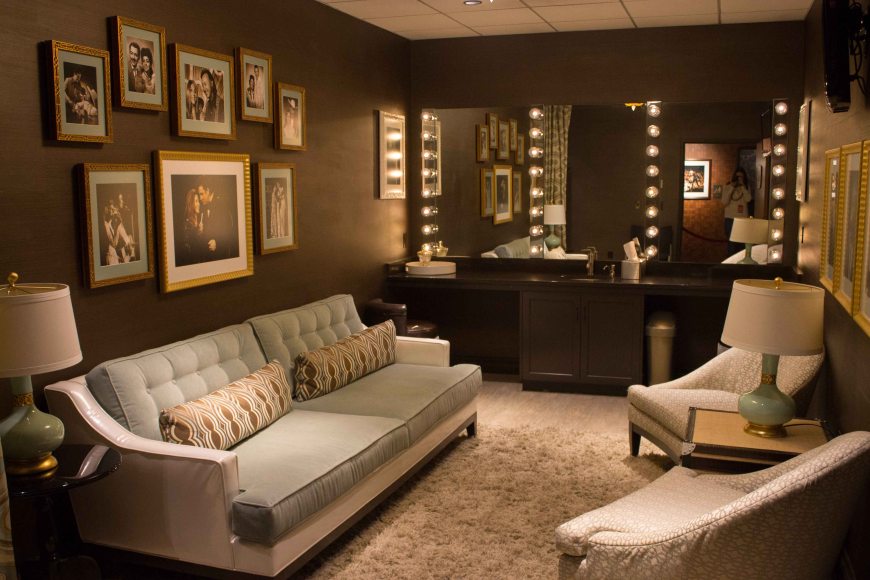 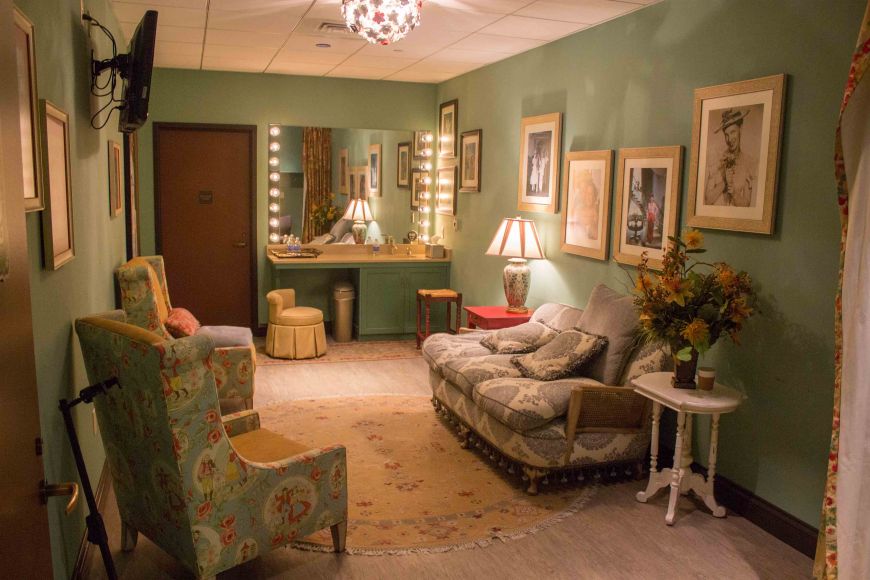 In the hallway with the dressing rooms, there are also displays with assorted Opry memorabilia, such as Hank Williams’ boots. 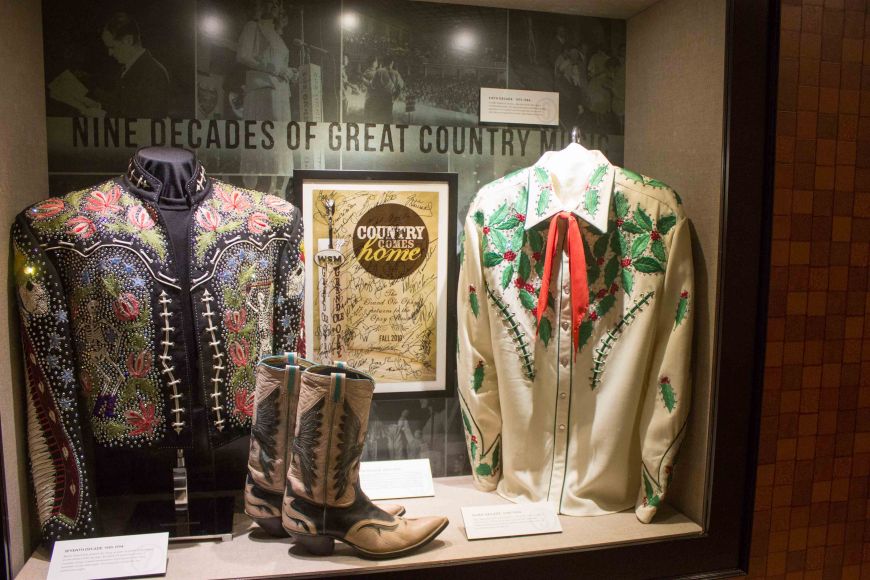 One of the most humbling parts of the tour was when we saw the Opry green room (where performers hang out together before the show) and the guide pointed out the brass post on the wall that indicated the high water mark from the flood that devastated Nashville in May 2010. The line was above my waist! It was incredible to hear about how the entire country music community came together to repair the damage done to the Opry House and bring it back better than ever. 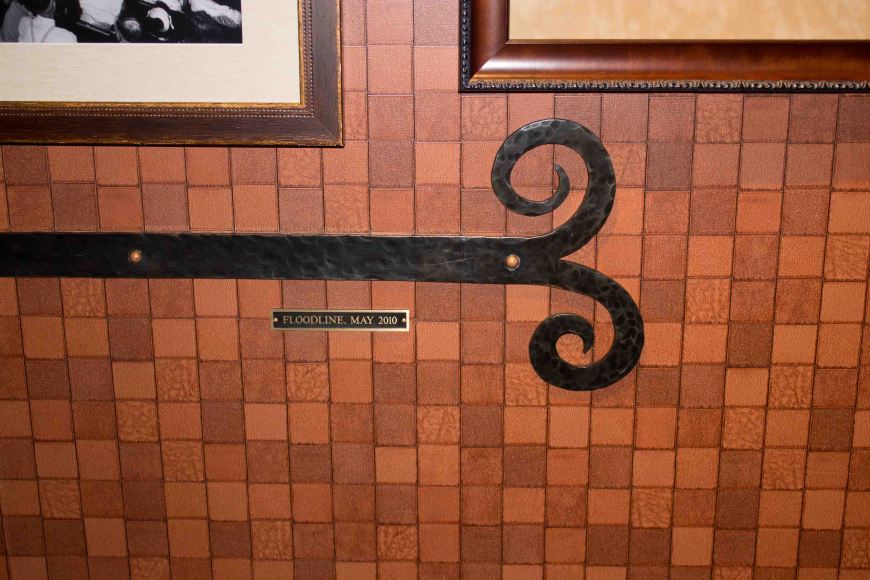 The tour concluded with our guide leading us stage and letting us take in the venue from the perspective of all the legendary artists who have performed there. 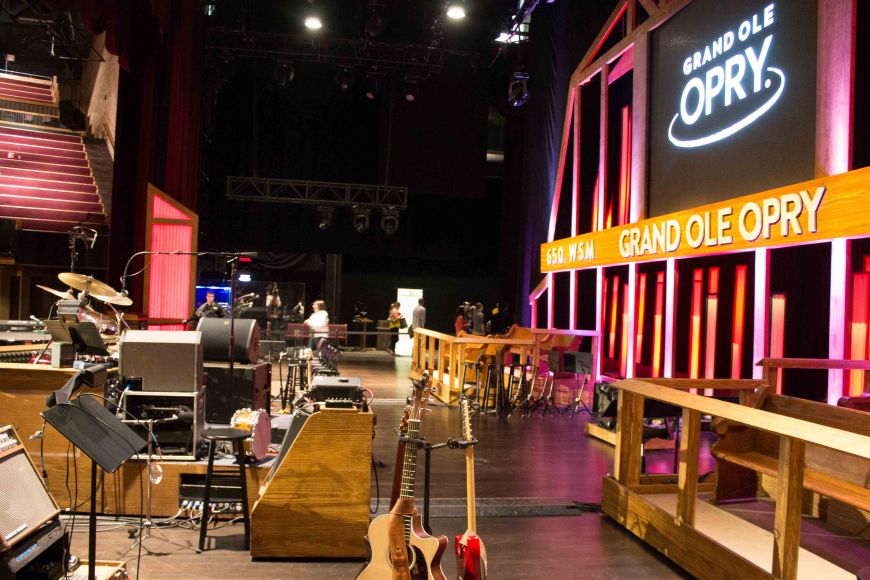 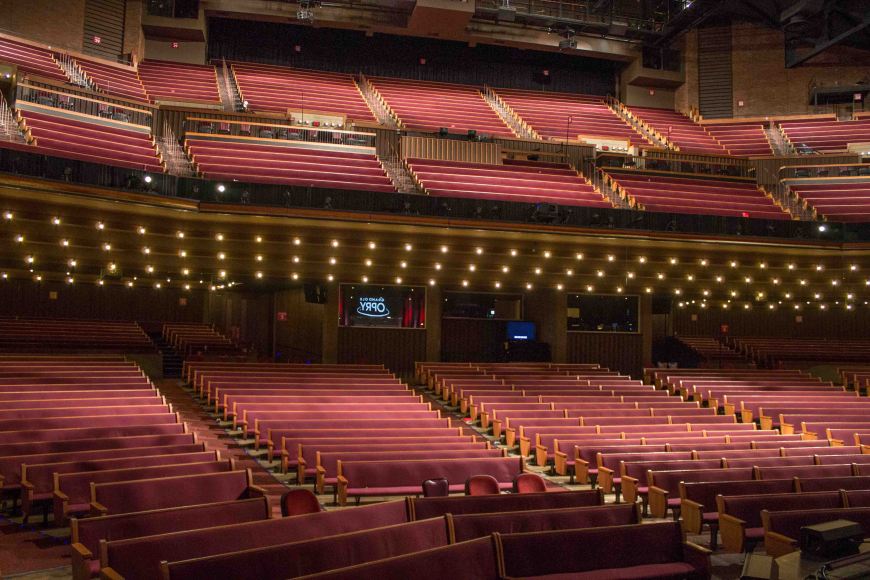 We even had the opportunity to step into the famous “circle,” a piece of wood that was cut from the stage of the Opry’s original home (the Ryman Auditorium) and placed in the center of the Opry House stage. (We also posed here for the obligatory photo that they later tried to sell to us for $20.) 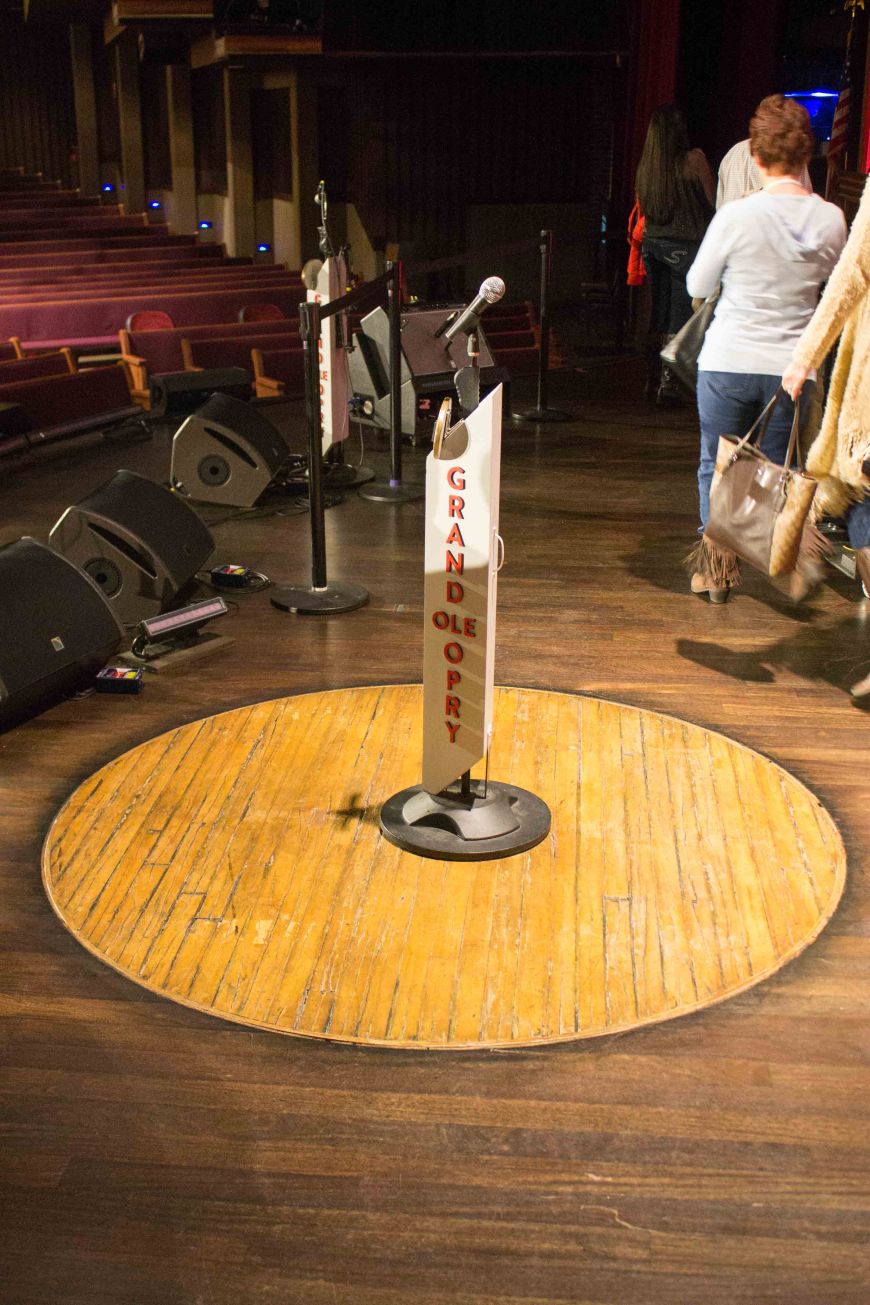 While I would heartily recommend seeing a show at the Opry to just about anyone (who doesn’t actively hate country music, that is), the backstage tour is probably only worth the money if you’re a big country fan or really into music history. It was certainly entertaining, and I’m glad I was able to get the behind-the-scenes perspective, but at more than $25 per person, I thought it was a little overpriced for the length (approximately 45 minutes) and quality of the tour.

One thought on “A Night at the Grand Ole Opry”