“Paradise” is really the only way I can think of to sum up Bora Bora. This beautiful South Pacific island rises up dramatically from the turquoise lagoon that surrounds it, and is famous for its beautiful beaches, great snorkeling, and being one of the few places in the world where you can stay in an overwater bungalow, a hut built on stilts directly over the ocean. In the short time that I was there, I fell head over heels for Bora Bora, thanks in no small part to my decision to stay at the dreamy Le Méridien.

Getting to Bora Bora is something of a process. After an eight hour flight from LAX and a layover at an airport motel in French Polynesia’s main town, Papeete, we hopped a propeller plane for the 50 minute flight to Bora Bora. I snagged a window seat and had my first glimpse of paradise from the air. 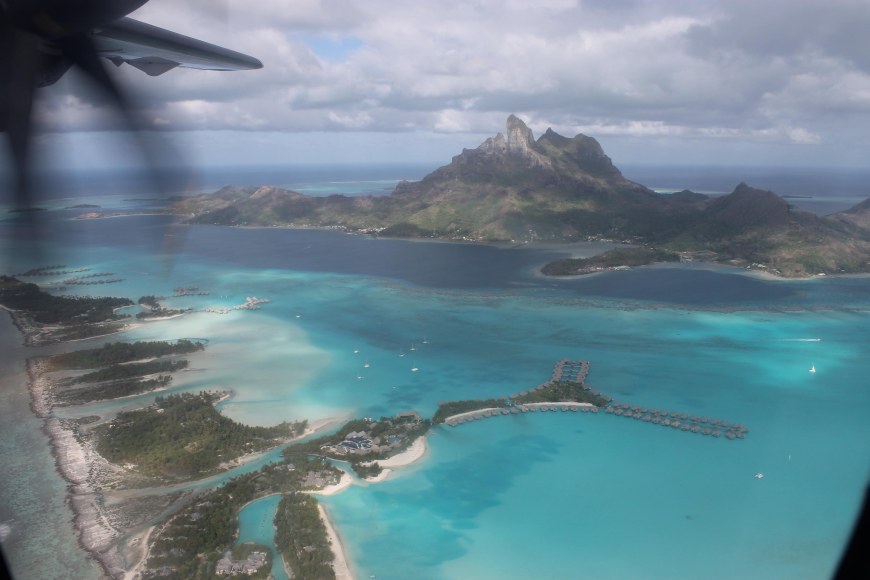 Le Méridien’s 5 star service begins as soon as you land at Bora Bora Airport (which, by the way, looks like a vacation destination in and of itself – is this not the prettiest tarmac you’ve ever seen?) 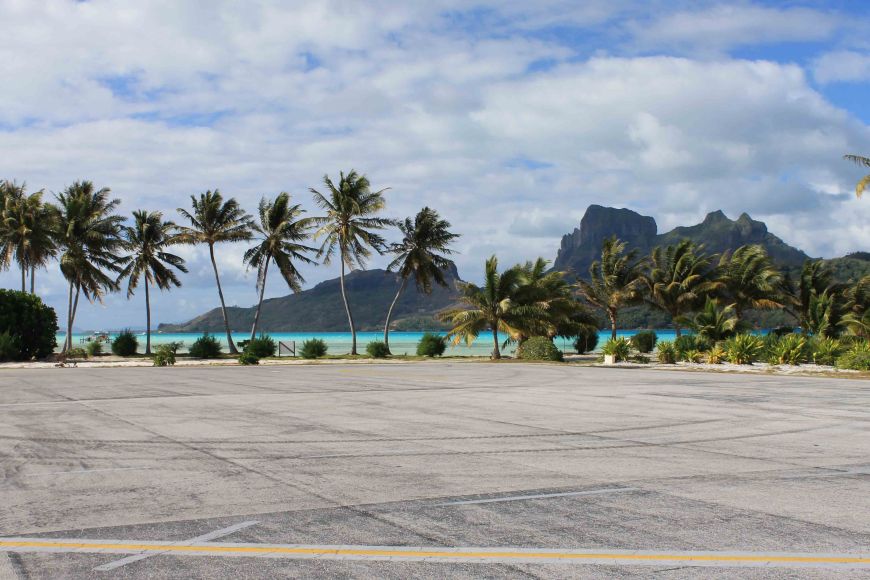 Bora Bora is one central island with a lot of islets, called motus, surrounding it. Most of the resorts, Le Méridien included, are built on the motus and face the main island, which means they have a great view of the main island’s big mountain, Mount Otemanu, as well as the brilliant turquoise water that fills the shallow lagoon between the islets and the main island. Because of this, you have to be transported by boat to the hotel, which adds to the glamour. We were met at the airport by Le Méridien staff, who gave us leis and cold bottles of water while our bags were whisked away from us and loaded onto the water taxi. 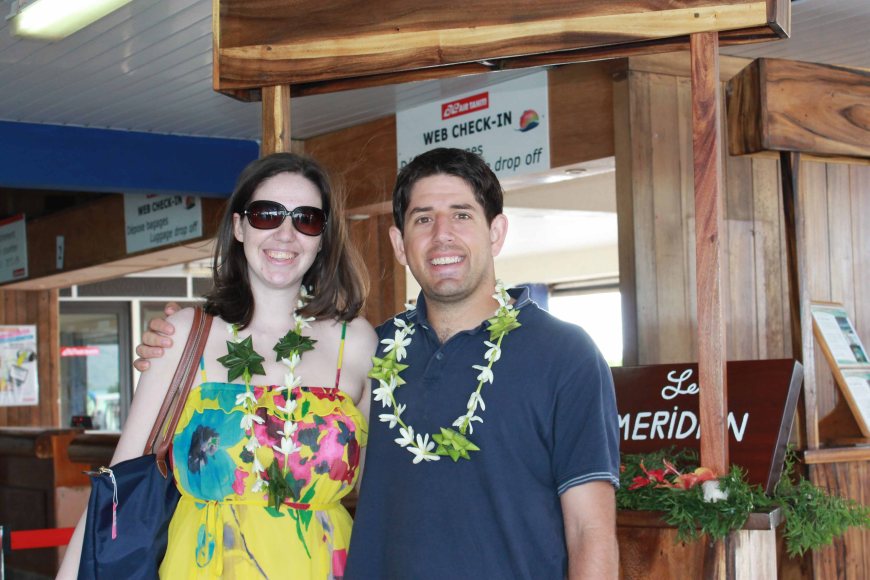 The boat ride to the hotel was incredibly pleasant. Even though it was a bit breezy, it was still a smooth ride, and we enjoyed the views of beautiful Bora Bora. Boat or jet ski rides around the island are a popular activity here, but after the water taxi ride to the hotel I felt we didn’t even need to pay for a boat excursion.

When we arrived at the hotel’s deck we were ushered onto a golf cart to drive the couple hundred feet to the reception desk. We were handed a complimentary welcome cocktail to drink while we filled out check-in paperwork.

We were then loaded back on the golf cart and given a quick tour of the resort that ended with arrival at our bungalow. I’m a big believer in first impressions and Le Méridien couldn’t possibly have left a better one on us.

We had requested a room with a view of Mount Otemanu and Le Méridien definitely delivered! 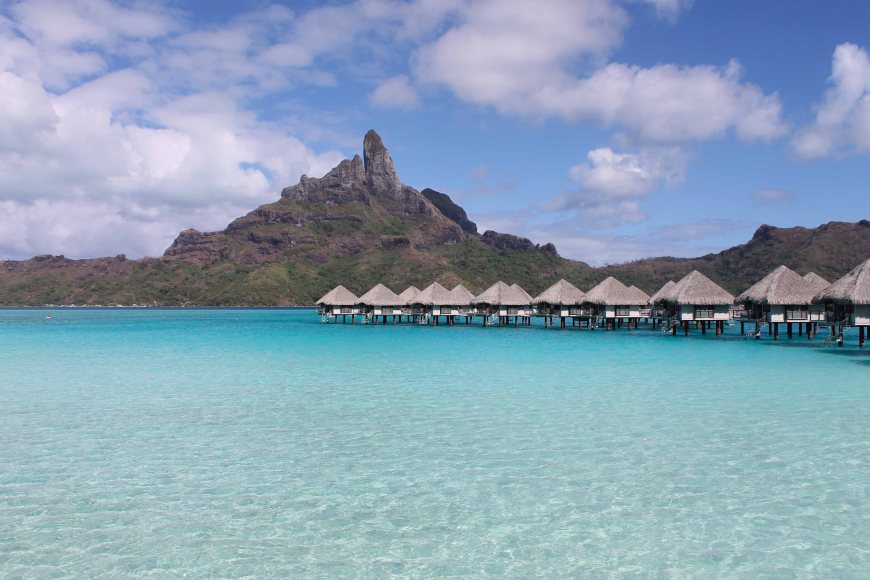 Our room was reserved for Starwood Preferred Guests, but you just have to be a member of the program, you don’t have to have any special status (I don’t). If you’re not already a member, I highly recommend signing up, if for nothing else than access to preferred rooms and the two complimentary bottles of water they give members each day. Our bungalow was absolutely beautiful. Other than the view from the private balcony, the highlight of the room was the huge glass floor that let us peek into the ocean below. We amused ourselves more than I should probably admit by having one person stay in the bungalow and the other person swim underneath, and then waving at each other. At night time, we would often see stingrays hanging out down there; I think they were attracted to the light the bungalows give off.

As someone whose mood varies in pretty much direct correlation to my proximity to the ocean, I can’t overstate how incredible it was to wake up every morning and walk down a short staircase right into the sea.

As shown on this map, Le Méridien’s bungalows are in two large groups, separated by the hotel’s main beach and pool area. We were on the right side as you face Mount Otemanu, and the other set of bungalows can be seen on the left side of the photo below. The bungalows at the end of each pontoon are “premium” bungalows that cost more. We didn’t pay for one, and after visiting I’m glad we didn’t. Our bungalow (#206) was one of the closest in to the main areas (I think it was the third overwater bungalow on the left side of our pontoon), but I felt like we had an even better view of Mount Otemanu than the bungalows at the end of the pontoon (and the map confirms that our bungalow more directly faces the main island than many of the premium bungalows). In addition, the water is pretty deep at the end of the pontoon. Some people might see this as a benefit, but I liked being able to enter the lagoon in shallow water and swim to deeper water if desired.

I could have had a perfectly great vacation never leaving our bungalow, but the public areas of the resort are really nice as well. The main beach has beautiful white sand, palm trees, and hammocks.

The beach is also the resort’s hub for outdoor activities. Most non-motorized sports equipment is free for guests to borrow, including kayaks, Polynesian canoes, stand up paddleboards, inflatable rafts, snorkel equipment and badminton paddles and nets. You can also pay to rent sailboats and jet skis. We took full advantage of the free equipment and borrowed kayaks, paddle boards and rafts during our stay. Even though the hotel seemed fairly full when we were there, we never had to wait for any equipment. 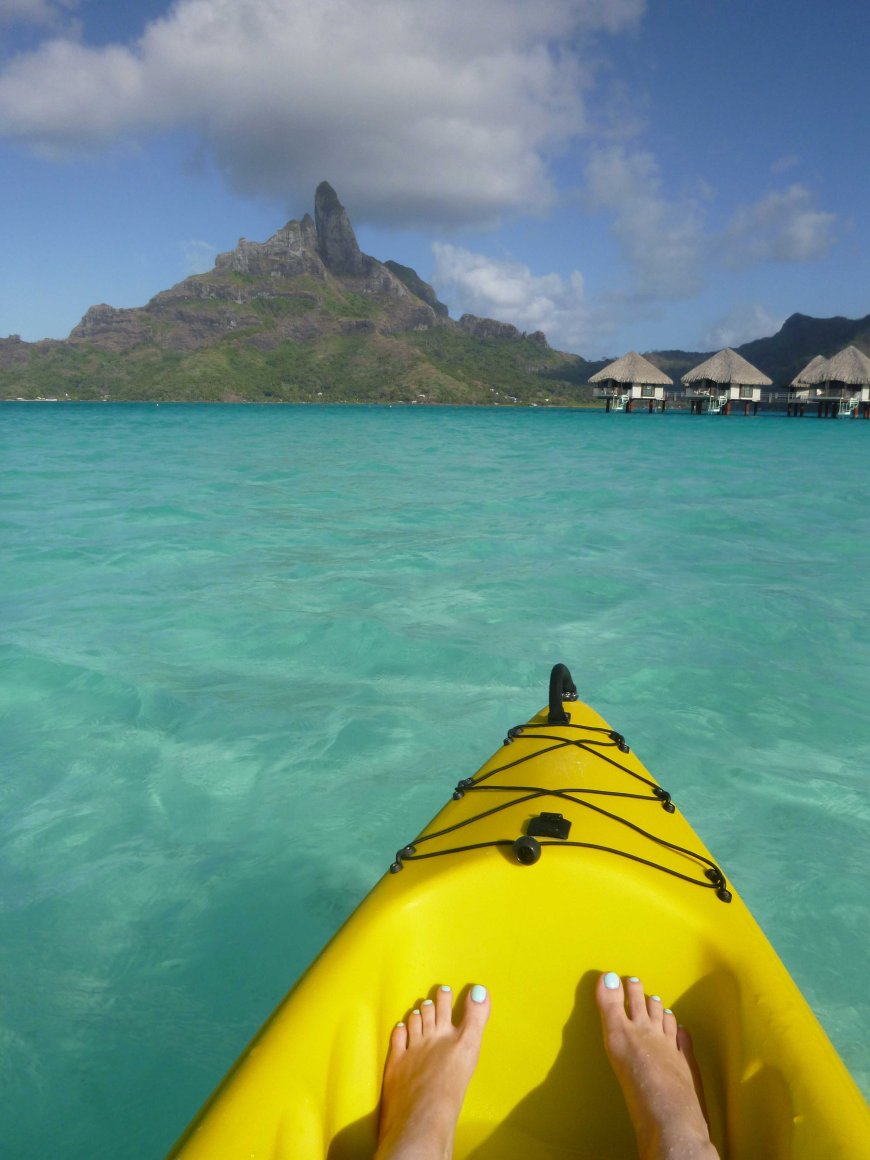 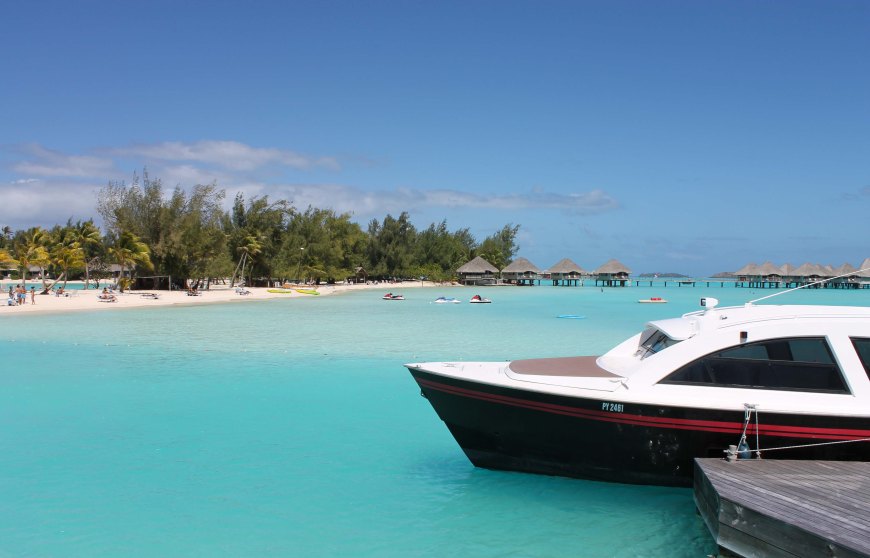 This area has the hotel’s best snorkeling, and it’s quite nice. Although the coral isn’t that impressive, there’s a large quantity of fish, especially in the part of the lagoon near and underneath the hotel’s chapel. This is where the lagoon meets the hotel’s turtle sanctuary, and although the sanctuary is cordoned off by a mesh net, the fish are clearly attracted to all the food that’s given to the turtles and like to hang out right near the net. The fish in the lagoon are friendly, and very close to your face, thanks to the shallow waters.

The turtle sanctuary, the Bora Bora Turtle Center, is another thing I love about Le Méridien. They rescue and rehabilitate injured sea turtles for eventual release into the wild. Guests can visit the turtle sanctuary for free and observe the daily feedings. If you sign up far enough in advance, you may also be able to snorkel with the turtles. It’s a short swim (approximately 10 minutes) and it’s definitely not the same as swimming with turtles in the wild (since the enclosure is fairly small and you can see the walls at pretty much all times), but it’s certainly worth doing, especially since it’s free. As someone who tries to be eco-conscious when I travel but doesn’t always succeed, I really appreciate Le Méridien’s commitment to conservation of the local wildlife (in addition to the turtles, they also have an ongoing coral reef regeneration program). 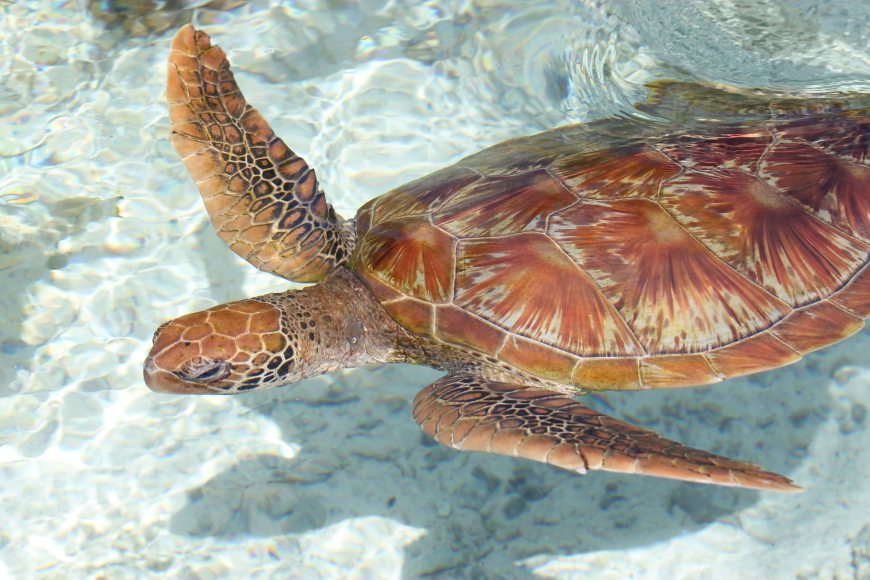 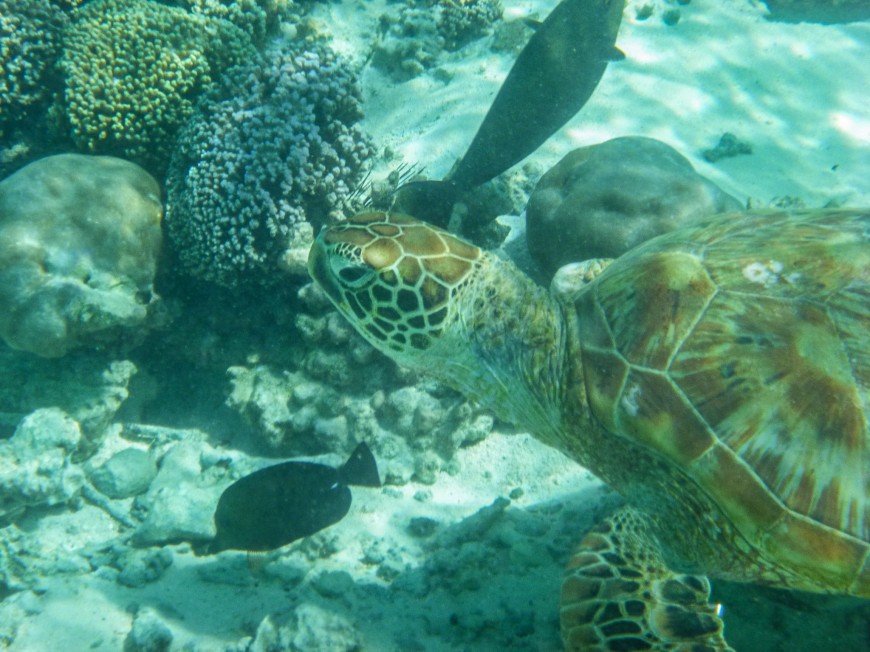 There are two infinity pools at the hotel, and although they’re beautiful, I found the water a little chilly (especially compared to the ocean, which was like bathwater). I’ve never been much for pools when there’s an ocean nearby, anyway. The pool area is certainly lovely and I enjoyed hanging out there and reading.

As beautiful and luxurious as Le Méridien was, the thing that perhaps stood out to me the most about the hotel was the service. Almost uniformly, the staff was friendly and determined to make our stay as wonderful as possible. Even though we are decidedly not VIPs, from the celebrity-esque arrival to the final farewell with ukulele music, we were made to feel so very special.

I don’t know that I can single this out as my best trip ever (our honeymoon in Greece certainly holds a very special place in my heart), but this is without a doubt the place that was the hardest for me to leave. I’m pretty sure there were tears on the water taxi back to the airport. I hope more than anything that some way, somehow I find a way to make it back to beautiful Bora Bora. Until then, I will cherish the memories of our time here.