One very popular activity in French Polynesia is taking a 4×4 jeep tour around the island, and we did this on both Bora Bora and Mo’orea. To understand what to expect on the jeep tour, you have to know a little bit about the geography of the islands. In Bora Bora, most of the hotels sit on islets known as motus that are separated from the main island by a shallow lagoon. Thus, the best views of the main island and its iconic Mount Otemanu are from the resorts (and from the boat you’ll take from the airport to your resort). The jeep tour is certainly a pleasant way to kill an afternoon and learn more about Bora Bora’s culture and history, but don’t expect jaw-dropping views. Mo’orea, in contrast, has no motu surrounding the island, and the hotels are built on the main island and face outwards towards the sea. This means that to properly appreciate the island’s beautiful mountain scenery, a trip around the main island and in particular to Belvedere Lookout (pictured below), is a necessity. 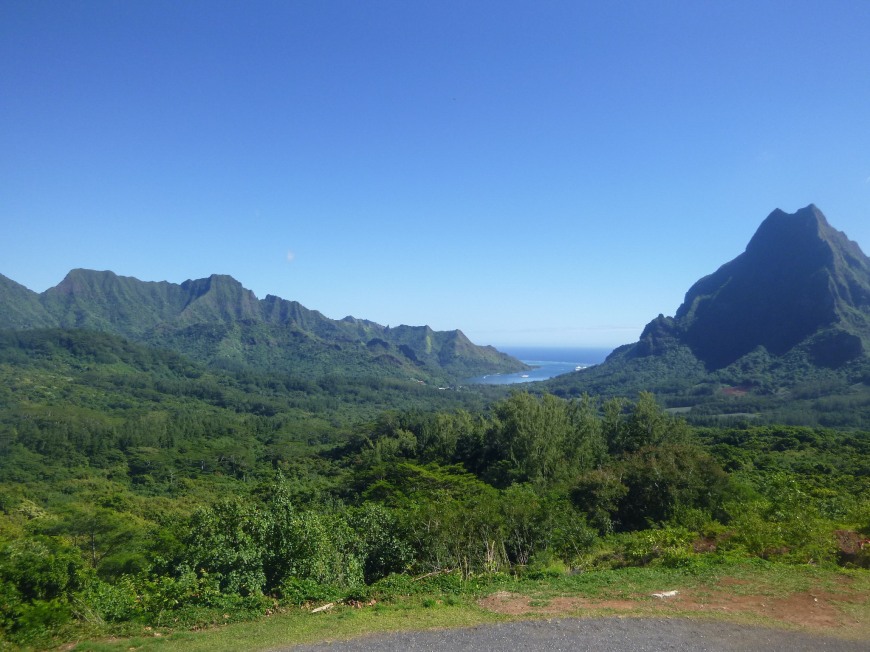 This may just be a function of the particular guides and companies we used, but the trips had quite a different flavor from each other. In Bora Bora, the jeep ride felt like an informal drive around the island with a friend, with our guide Hiro chatting away, telling us about life on Bora Bora, and at one point even pointing out his own home to us as we drove by. In contrast, the trip in Mo’orea felt more formal and structured, moving from designated stop to designated stop, although our guide there too mixed in anecdotes from his life and didn’t seem to be reciting a script. I wouldn’t say either was better or worse and I really enjoyed both styles, but they were definitely different.

We began our tour in Bora Bora with a visit to Matira Beach, one of Bora Bora’s only public beaches.

After that, it was off to Bloody Mary’s, Bora Bora’s most famous restaurant, known for its fresh seafood and the incredibly long list of celebrities who have visited and been immortalized on a large sign out front.

The next stop was my favorite of the Bora Bora tour: we drove to a slightly higher point where we had nice views of Mount Otemanu and the ocean below.

Finally, we visited some canons and bunkers that were built by the U.S. military when it used Bora Bora as a South Pacific army base during World War II. Hiro told us that the locals use the bunkers as shelter during especially bad storms. The view from this spot was really nice too. 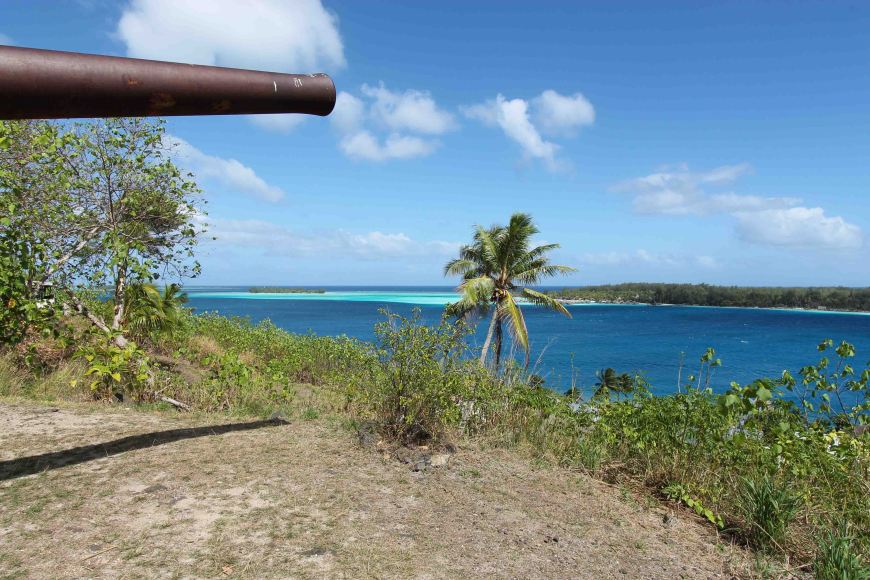 The only part of the tour I could have done without was when we watched some local women tie-dye sarongs and then were given the opportunity to purchase them. I understand that this kind of thing is pretty universal in tours like this (we had a shopping stop on our Mo’orea tour too), but this went it on for a little too long after everyone on our jeep had made it clear we weren’t interested in purchasing. Overall though, I really enjoyed the tour in Bora Bora and especially Hiro’s narration. As I said above, I think a jeep tour is less of a must-do in Bora Bora than in Mo’orea, and if you only have time or budget for one tour I would recommend the shark and stingray snorkeling trip, but if you’re looking for a second activity to do on the island, this is a great option.

Our Mo’orea tour began with a (steep!) drive up to an overlook at Magic Mountain, where we had nice views of Mo’orea’s coastline and Opunohu Bay.

We then headed to a beautiful black sand beach, where several films, including The Bounty, were filmed. This movie had been shown on our Air Tahiti Nui flight to French Polynesia, so getting to see where it had been filmed was more interesting than it might have been otherwise. In addition, our guide had been tangentially involved in production, and had several amusing anecdotes, mostly about the bad behavior of certain movie stars.

The highlight of the tour for me was the view from Belvedere Lookout, where we had panoramic views of Mount Rotui and the two bays it separates, Opunohu Bay and Cook’s Bay. The road up here is steep as well, and also quite curvy; I recommend taking motion sickness medicine if you’re prone to that.

After that, we visited the ruins of an ancient Polynesian temple, where our guide joked that they would sacrifice the person with the largest camera, which unfortunately was me.

Luckily, I survived to see the next stop, a pineapple farm and the attached pineapple juice distillery, where we had the opportunity to taste some fruit juices and alcohols. 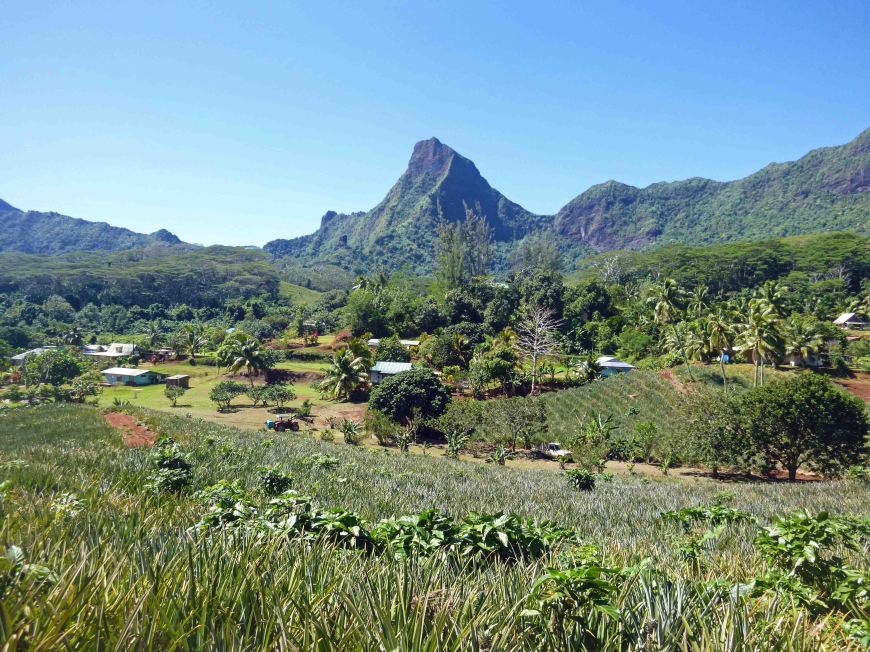 The Mo’orea tour had a shopping stop as well (at a Tahitian black pearl shop), but it was handled better than on the Bora Bora tour. For one, there was a brief presentation on pearl farming that was actually quite interesting to me even though I had no intention of purchasing anything (read: no money to purchase anything). In addition, this stop was at the very end of the tour, and the guide immediately picked up on who was not interested in shopping and took us outside to pay and return to our resorts. 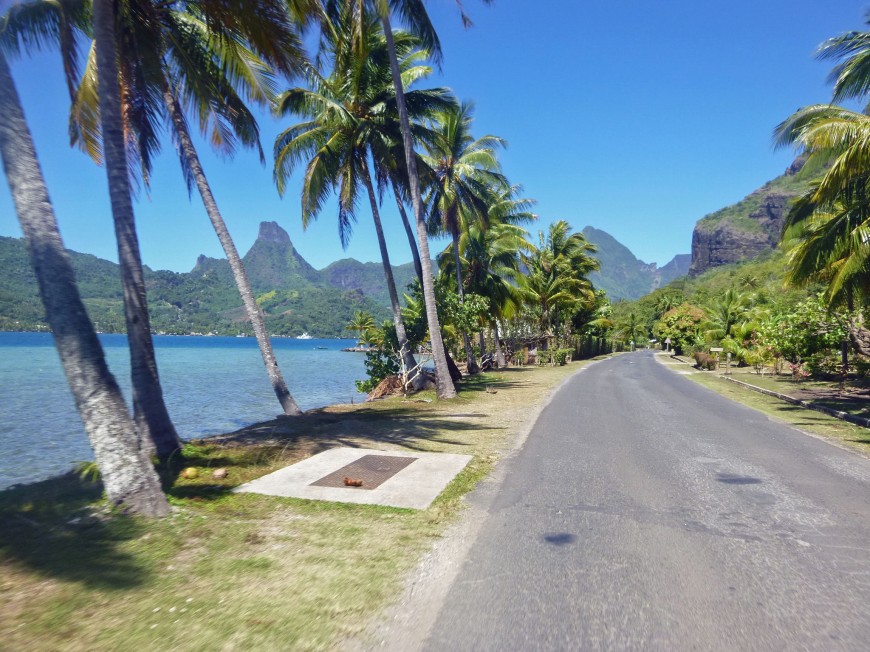 In Bora Bora we went with Vavau 4×4 Adventures and in Moorea we used Albert’s Transport. I highly recommend both companies; our guides were engaging and knowledgeable, and I felt the tours were well worth the price paid.