Everything I had read before we left for Thailand suggested that Bangkok is a hard city to love as a first-time visitor. With only 48 hours to spend there, I sort of anticipated that I wasn’t going to fall head over heels in love, and that indeed turned out to be the case. Still, I’m glad I visited the capital city, and not just for purposes of checking it off the proverbial bucket list. Bangkok was an experience unlike any other. It was loud, it was frantic, it was utterly overwhelming (and we didn’t even go to the seedy areas!). I have never felt so much culture shock in my life, and it’s something I’m grateful I had the chance to experience.

Our first day, we headed out bright and early to the Old City to see Bangkok’s most famous tourist attractions. We used the sky train and subway system – with surprising ease – to go to the Hua Lamphong station, which our guidebook advised was the nearest stop to the Old City. When we exited the subway station we quickly determined this was not the case. The neighborhood we were in, near Chinatown, didn’t seem walkable at all – even if we’d known which way to walk, which we didn’t – and when we asked locals how to get to the Grand Palace we were met with befuddled expressions. The few who spoke English indicated that it was too far to walk and not a safe neighborhood to walk in. So it turns out in this case “nearest” doesn’t mean “near” or even “remotely convenient” (thanks, Fodor’s). (We later learned that because both our hotel and the Old City are right on the Chao Praya river, we could have just taken a public ferry straight there and it would have taken less than 15 minutes.)

Anyway, we somehow ascertained that we could take a local bus number 53 from this subway station right to the Old City, and, in a stroke of good luck, moments later that very bus stopped right in front of us. This bus ride was such a trip. Being the only foreigners riding a rickety open-air bus (that started driving away when I was less than half on it) was an experience in and of itself. But what we saw out the window as this bus made its way through Chinatown was even more incredible. The streets were filled with people and food stands, with motorcycles and tuk-tuks weaving in and out of it all. 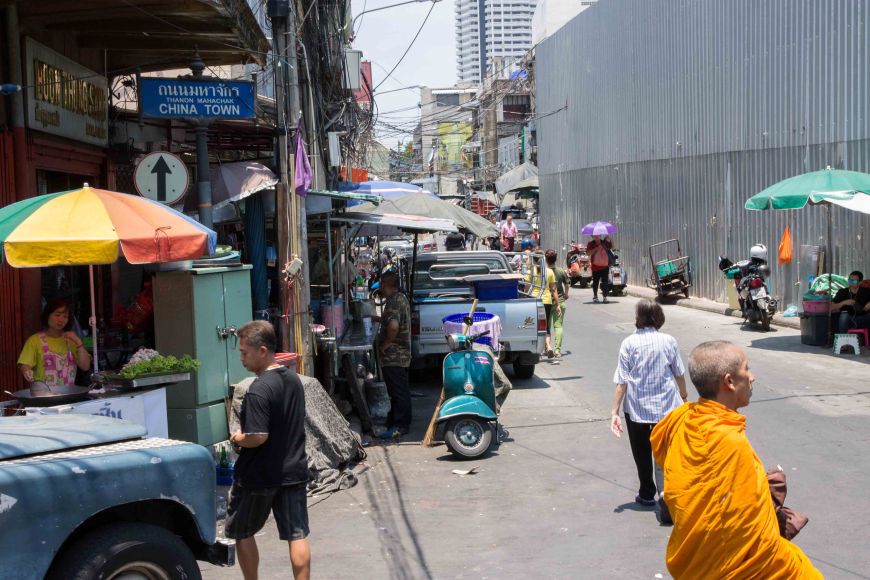 As advertised, this bus delivered us right to heart of the Old City, mere steps from the Grand Palace. The Grand Palace and Wat Phra Kaew (Temple of the Emerald Buddha) on its grounds were definitely my favorite sights in Bangkok and I’ll share way too many photos from here in a future post. 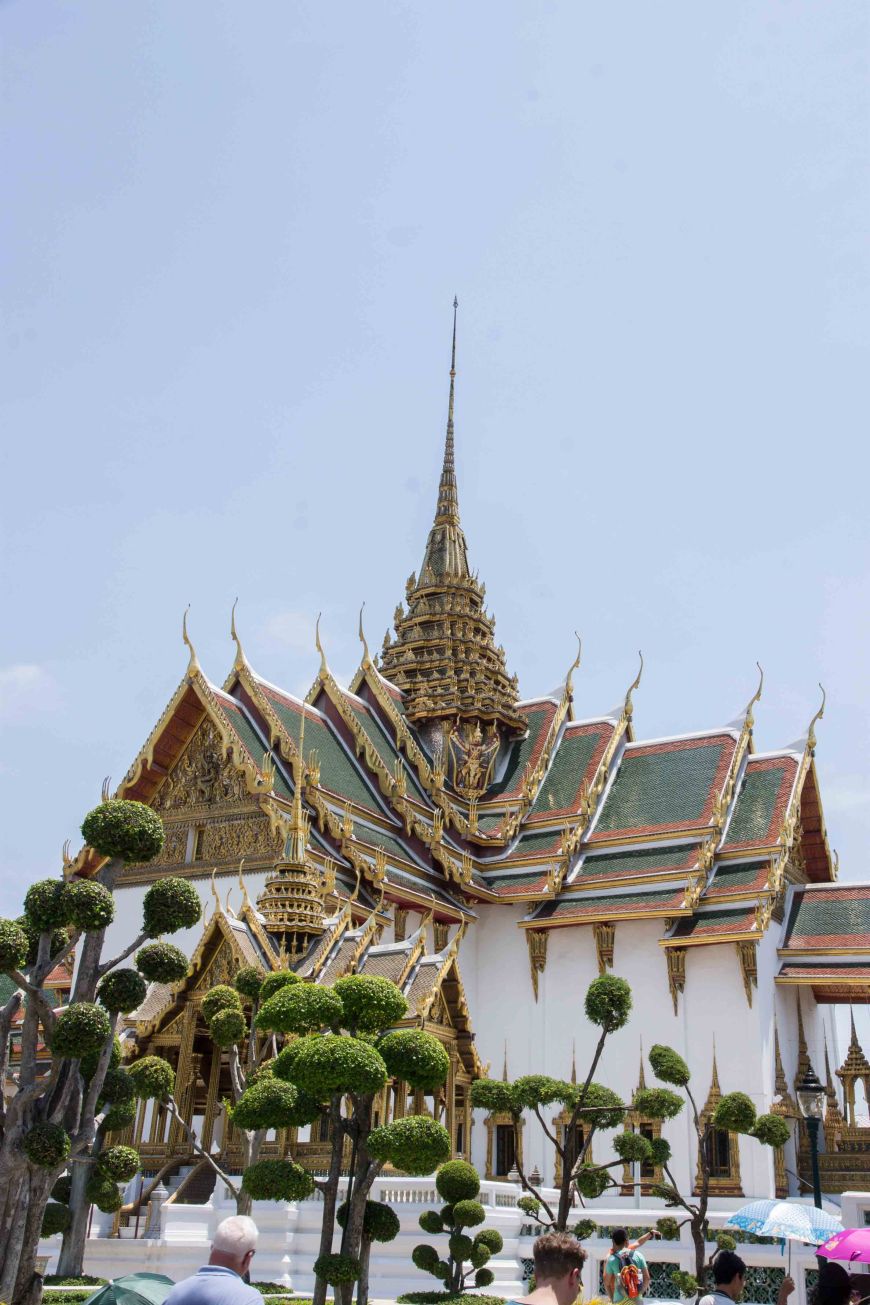 From there, it was a short, and thankfully well-marked, walk to Wat Pho (pronounced “Po”), home to the famous reclining Buddha. This 150-foot long gold-plated Buddha is one of Bangkok’s biggest tourist attractions and is pretty impressive in person. 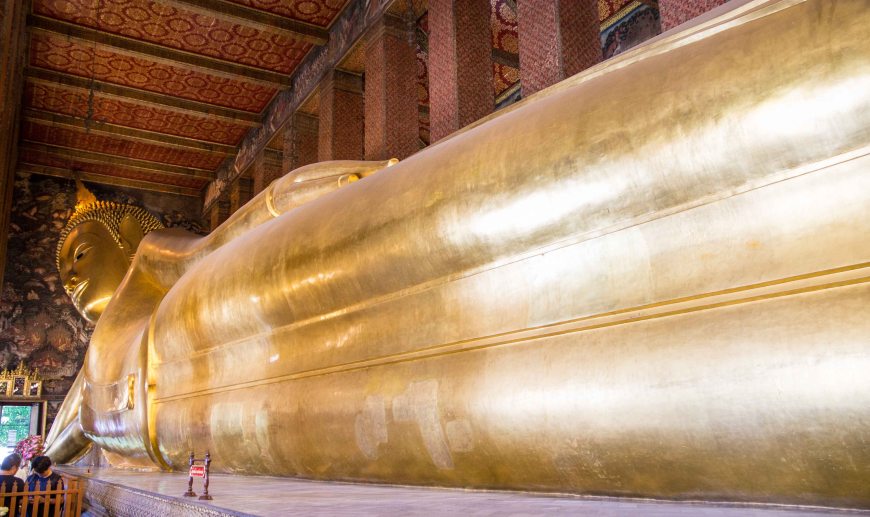 The other main thing I had hoped to see in Bangkok was Wat Arun (Temple of Dawn), which glows a beautiful golden color near sunrise and sunset, but I learned shortly before we left the US that it was being restored and had scaffolding all over it (man, we have bad luck with scaffolding on major monuments). When we caught a glimpse of it from our river taxi back to the hotel and saw that the scaffolding completely covered the main spire, we decided it was probably something we could skip.

Truthfully, I wasn’t all that devastated. Although Wat Arun had been the thing I was most looking forward to when we first planned the trip, I was kind of wat-ed out at this point, and I was also suffering from heat exhaustion (the temperature was “only” 100, but with the humidity the heat index was over 120) and was pretty grateful to have an excuse to go back to our hotel and spend the rest of the day lounging in the beautiful pool.

Having seen the major monuments, we took our second day at a more relaxed pace. We had our hotel’s free ferry boat deliver us to the Central Pier across the river, but rather than hopping on the subway as we had done the previous day, we walked along Silom Road, a major thoroughfare that connects the waterfront to Lumphini Park. Perhaps it was the time of day (we had finally beaten the jet lag and were able to get an early start on day two) or simply the neighborhood we were in, but this area felt considerably less chaotic than Chinatown. Make no mistake, though, it was still a very bustling place, with people walking to school and work and street vendors setting up shop on the side of the road, and of course taxis and tuk-tuks driving like maniacs all over the place. Crossing the street, even at a crosswalk, is an incredibly challenging thing to do in Bangkok. 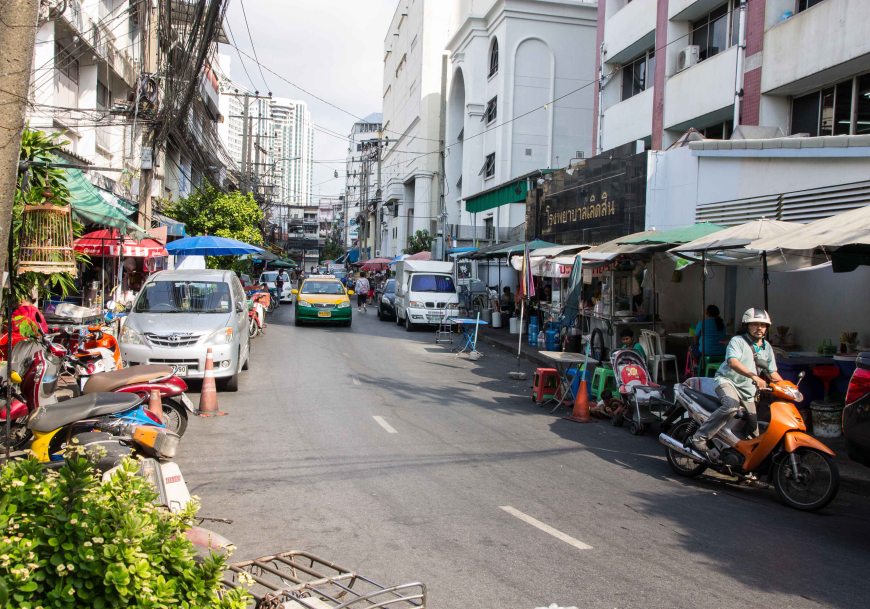 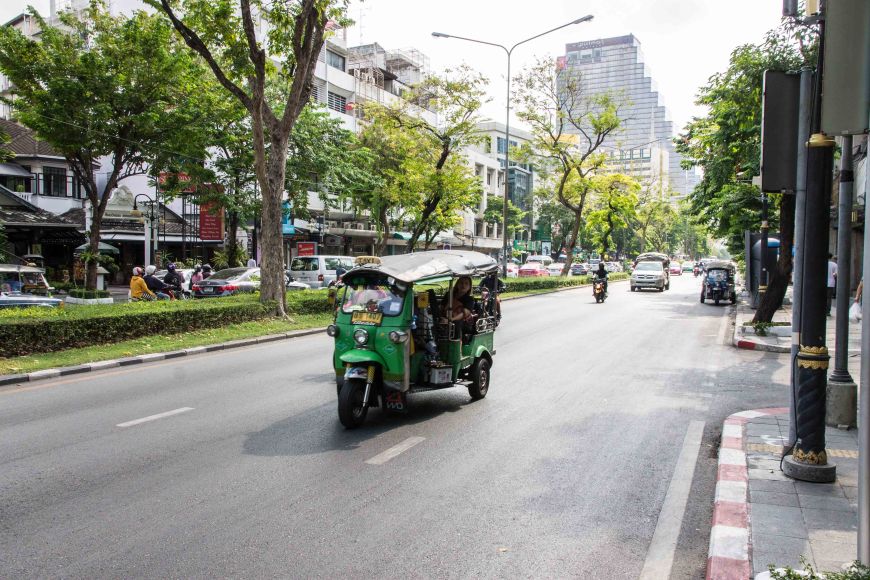 Lumphini Park – Bangkok’s version of Central Park – is a really peaceful oasis in the middle of this hectic city. We strolled around, enjoying the greenery and the shade. 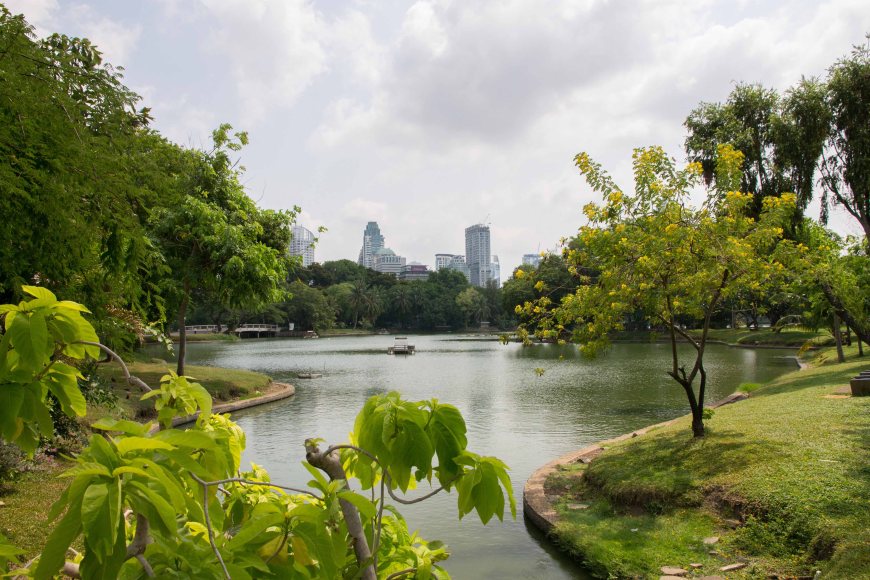 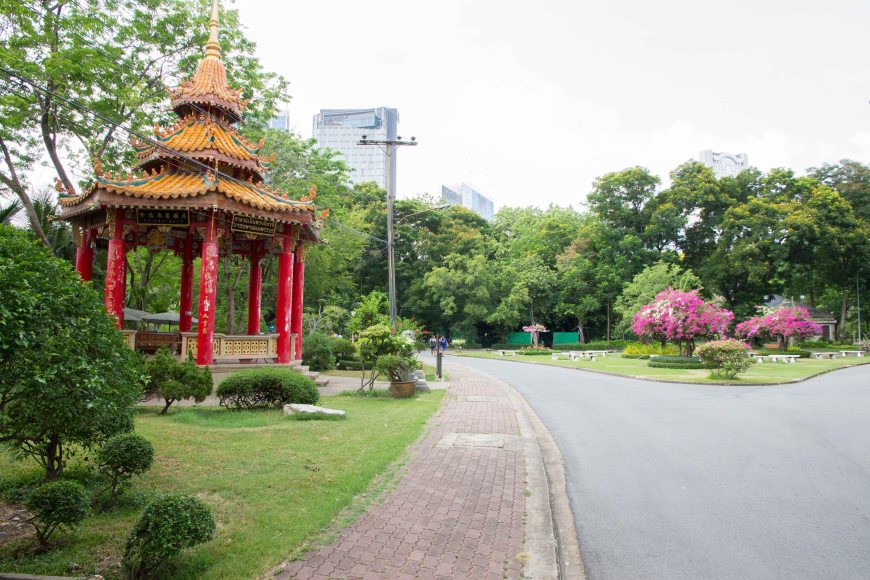 We decided to take a tuk-tuk home from the park, because I felt like I couldn’t go to Bangkok and not ride in one. It was a fun experience, although certainly touristy (we barely saw any Thai people riding in tuk-tuks) and a taxi would no doubt have been cheaper and safer. Plus, the tuk-tuk not only didn’t deliver us where we wanted to go, it got us only marginally closer to our destination. I read a post online afterwards that said something to the effect of “take a metered taxi if you need to go somewhere; take a tuk-tuk to have an adventure” and I would say that’s a pretty accurate assessment. (Re: the photo below, I was pretty amused that our driver pulled out a newspaper and started reading it when we were stopped in traffic. I guess they have to do something to pass the time in the notoriously terrible Bangkok traffic!)

One of my strongest impressions of Bangkok was how much color there is in this city. Not just in the ornate wats and Grand Palace, although those are certainly colorful, but also in the cars, the long-tail boats that cruise up and down the river, and the flowers sold on the street. It really adds to the lively energy here. 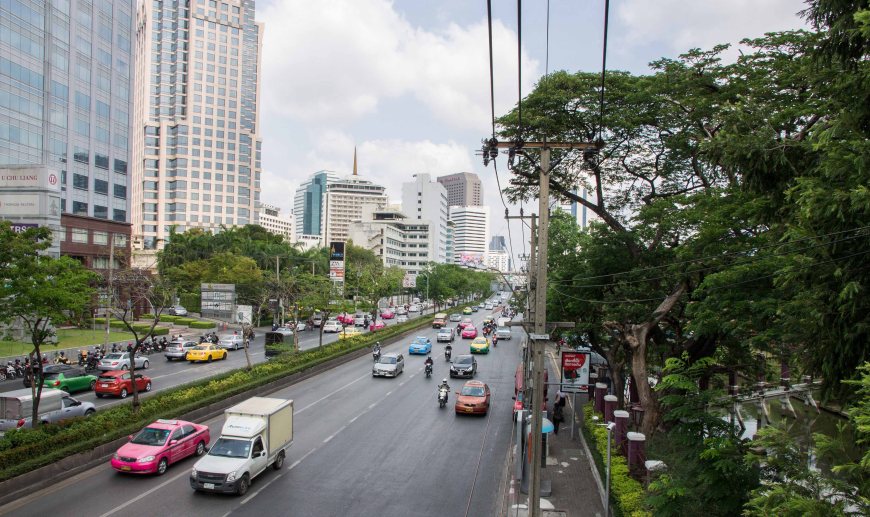 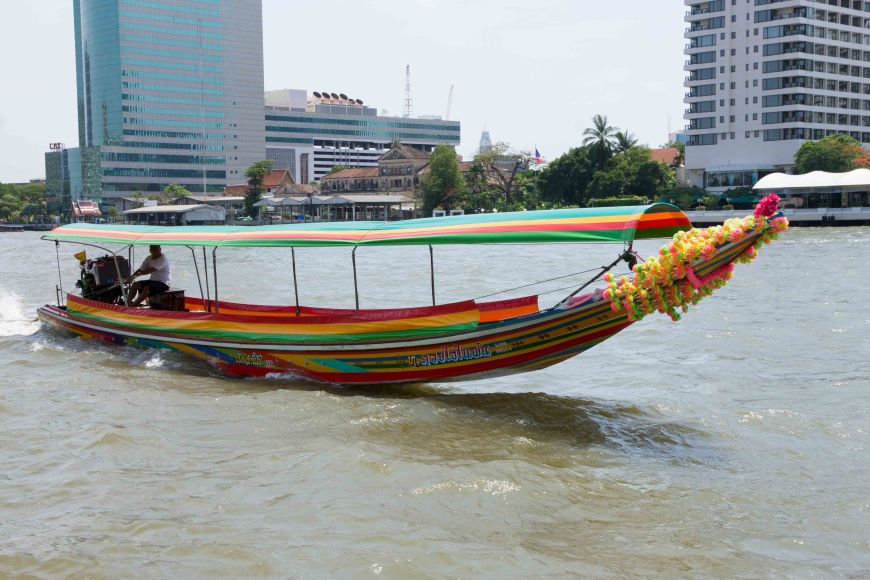 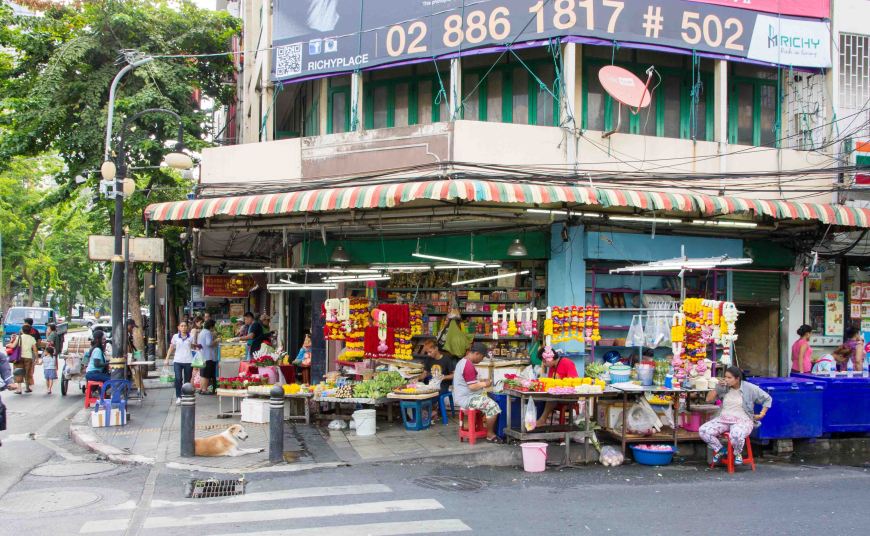 I feel like I can’t write about my experience in Bangkok without talking about all the scamming we experienced. I wish this wasn’t one of my strongest memories from our time here, but unfortunately it is. People came up to us on the street and told us we weren’t allowed to walk there and had to get in their tuk-tuk (of course). When we first walked up to the Grand Palace, someone told us it was closed and to come back after lunch (it wasn’t). The tuk-tuk driver ignored our request to go to a public pier and delivered us to his friend who operated a tour boat – and then demanded more money than he had quoted us when we got in. I suspected – or in some cases, even knew – that these people weren’t telling the truth (the “Grand Palace is closed” thing is very well known and written about in every guidebook), but there’s a difference between knowing in the abstract that someone is going to try to scam you and actually experiencing it. Given that Thailand is a country in which people face up to 37 years in jail for making fun of the King’s dog, we obviously wanted to be careful and not break any real rules, and I found all this attempted scamming pretty upsetting, even though I never once felt like I was in any physical danger. I will say, though, that you do get used to it: on one of our last days in Thailand we were on a long-tail boat in the Andaman Sea and someone came aboard our boat and demanded money from each of us for no apparent reason, and I stared him down without batting an eyelash. (Mostly I just like that story because the fact that we were on a boat makes that guy a PIRATE and not just a regular old scammer. Arrrr.) I think if we had done Bangkok at the end of the trip, I wouldn’t have found the scamming so unsettling, but the combination of jetlag and having just arrived in a totally unfamiliar country without speaking a word of the local language amplified the feelings of confusion and distress that the scammers created. Fortunately, it wasn’t something we experienced anywhere else in the country, except for that one incident on the long-tail, and there was much about Bangkok that left a positive impression on me too.

One thought on “First Impressions of Bangkok: Color and Chaos”