When you grow up in Iowa, you become something of an elitist about state fairs. After all, there aren’t any other fairs that are listed in the travel guide “1,000 Places to See Before You Die” or that have a musical written about them. I never felt much desire to visit a state fair in any of the places I’ve lived since leaving home, because I figured there was no way they could compare to Iowa’s. But now I’m living in the heartland again, and since it just doesn’t feel like a real Midwestern summer to me until I’ve eaten some food on a stick, I decided to check out the Indiana State Fair to see how it stacks up to my home state’s legendary one. 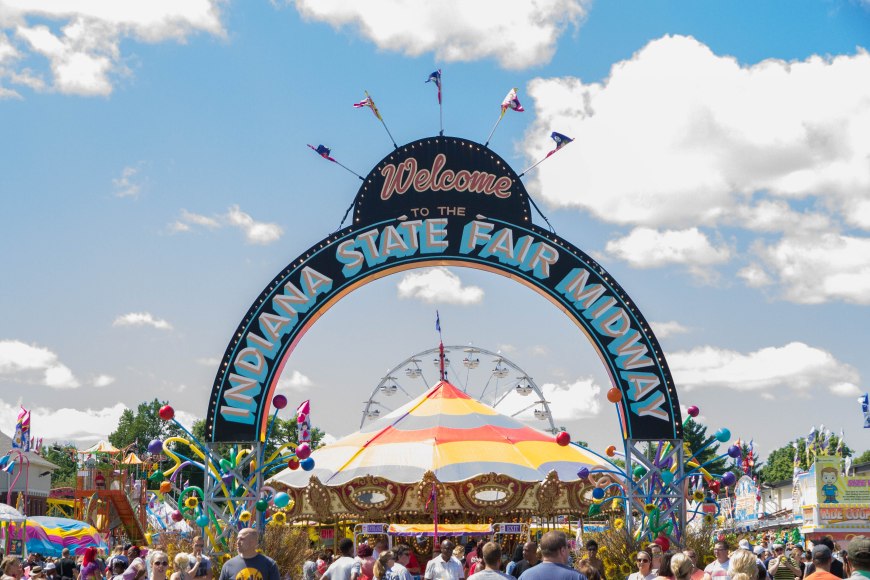 A state fair is, first and foremost, all about the food. Specifically, deep-fried, artery-clogging deliciousness. Funnel cakes, corn dogs, elephant ears, and, yes, even deep-fried butter are synonymous with Midwestern state fairs, and the Indiana fair was no exception. The portion sizes and prices prevented me from sampling as much food as I would have liked (next time I visit, I think I’ll check out $2 Tuesday, when many vendors offer smaller portions of food for just a couple bucks), but I think I managed to do a pretty respectable job eating. With some assistance, I put away some excellent fried green tomatoes, a turkey corn dog, deep-fried cookie dough (which my husband pronounced “disgusting” but I thought was actually pretty good, albeit too rich to eat very much of), and an apple cider slushie, and, in addition to the bites he stole from me, my husband had some pork tenderloin sliders. 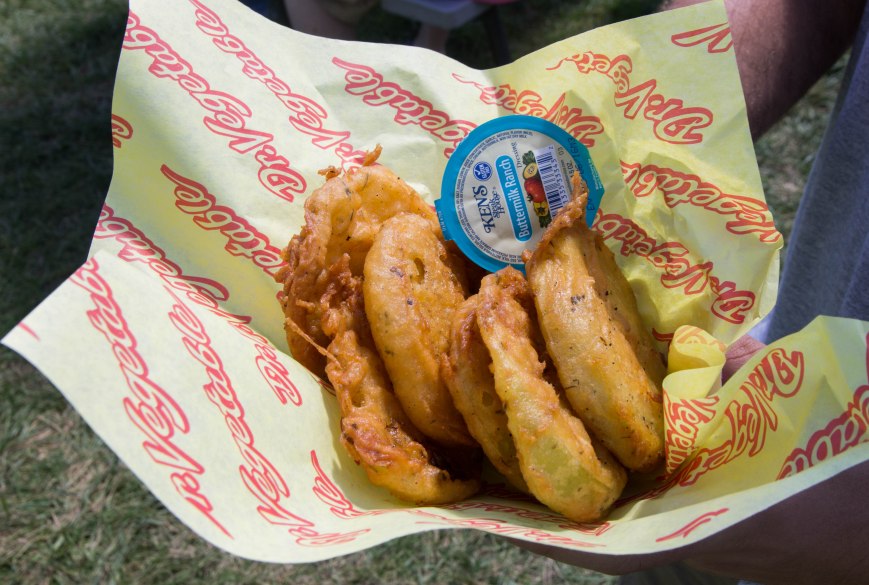 Aside from the food, the animals are the other big draw for me. The Indiana State Fair had several different petting zoos, featuring everything from the typical sheep and goats to the South Asian zebu.

I’m kind of conflicted about the livestock barns. The animals there are cute, but they are going to be turned into meat pretty soon, and they don’t have the nicest life in the meantime, which is something I didn’t fully appreciate as a kid. I will admit that the champion sow and her adorable litter of piglets reignited my childhood dream of owning a pet pig, which had kind of been on the back burner since I became a homeowner and started thinking about exactly what Wilbur would do to my furniture and floors.

Although I’m not personally much for carnival rides, it wouldn’t be a trip to the state fair without a pass through the bright lights of the Midway. There was a lot of yummy-looking food in this area too, but unfortunately I had already hit my limit. The cinnamon sugar mini-donuts were really calling my name, though. They’re at the top of my list for next time.

2016 is the 200th anniversary of Indiana’s founding and there are decorated fiberglass bison placed in all 92 counties to celebrate our “bison-tennial.” A number of the bison were on display at the fair and it was fun to look at them and learn about some corners of the state I haven’t yet visited.

We wrapped up the day with a visit to some of the exhibit halls, including the Department of Natural Resources building and the 4-H hall, where there was some seriously impressive artwork and photography on display.

I’m admittedly biased, but I don’t think the Indiana State Fair is quite as grand as the Iowa State Fair. But the day I spent here definitely brought me right back to my childhood trips to the fair and was the perfect way to cap off my first Midwest summer in more than a decade.

3 thoughts on “A Day at the Indiana State Fair”