I have never fallen head over heels in love with New York City. There are things I can appreciate about it – the ability to get any kind of food you want delivered directly to your door at any time of day, for example – but for the most part it hasn’t captured my heart the way many other places have. I was reminded on a recent trip to the city, however, that there’s one time of year when I really understand New York’s pull, and that’s the holiday season. I’m not sure if it’s because I read Miracle on 34th Street one too many times growing up, but there’s something about New York at Christmastime that’s just magical. Below are a few of my favorite things to see and do (and eat, of course) in NYC during that season. 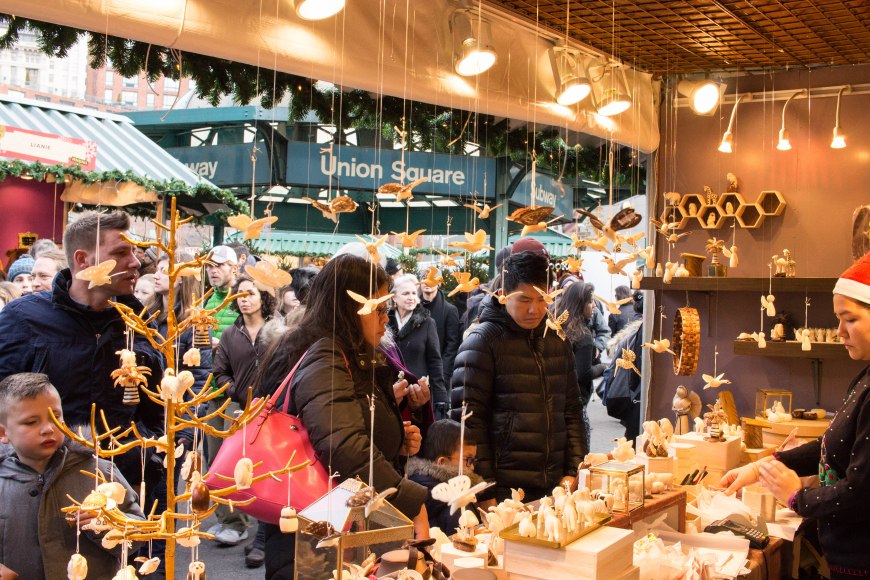 This market – which is open from mid-November until Christmas Eve – has vendors selling everything from baked goods and mulled wine to homemade Christmas ornaments and jewelry to exotic spices and teas. It’s not a place for the agoraphobic (although the same thing can be said of NYC generally and particularly New York at the holidays), but if you can stand a little elbowing this is a great place to get a jump start on holiday shopping or pick up some unique souvenirs. 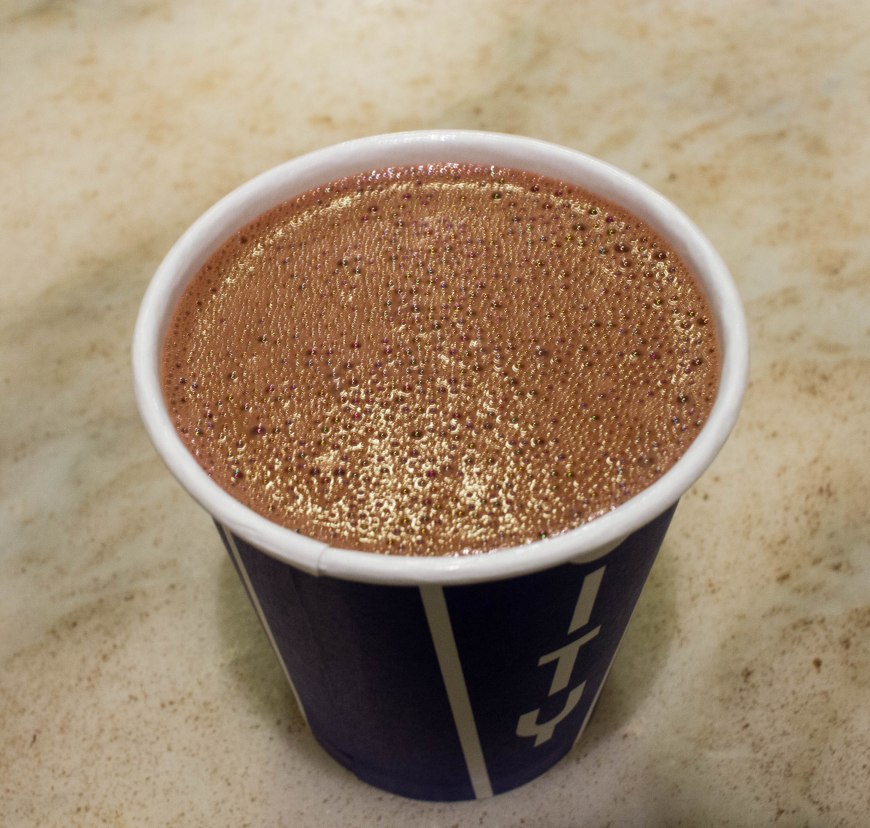 On a cold winter day, there’s nothing better than a cup of hot chocolate and City Bakery offers the best one I’ve had so far in NYC. Their rich, European-inspired version tastes more like a melted dark chocolate bar than the hot cocoa packets you grew up with. City Bakery is conveniently located right in Union Square, so it’s a great place to stop before or after a visit to the Holiday Market. (And if you’re looking for slightly more sustenance, their chocolate chip cookies are really good too.)

Visit the tree at Rockefeller Center

This one is kind of a “duh” – it’s only the most famous Christmas tree in the United States, after all – but I feel like it needs to be said that despite the fact that this place can be wall-to-wall bodies in December, it’s still worth a visit to see this beautiful tree in person. (I’d skip the skating though, unless you have an extremely high tolerance for waiting in lines and playing human bumper cars on the ice.) 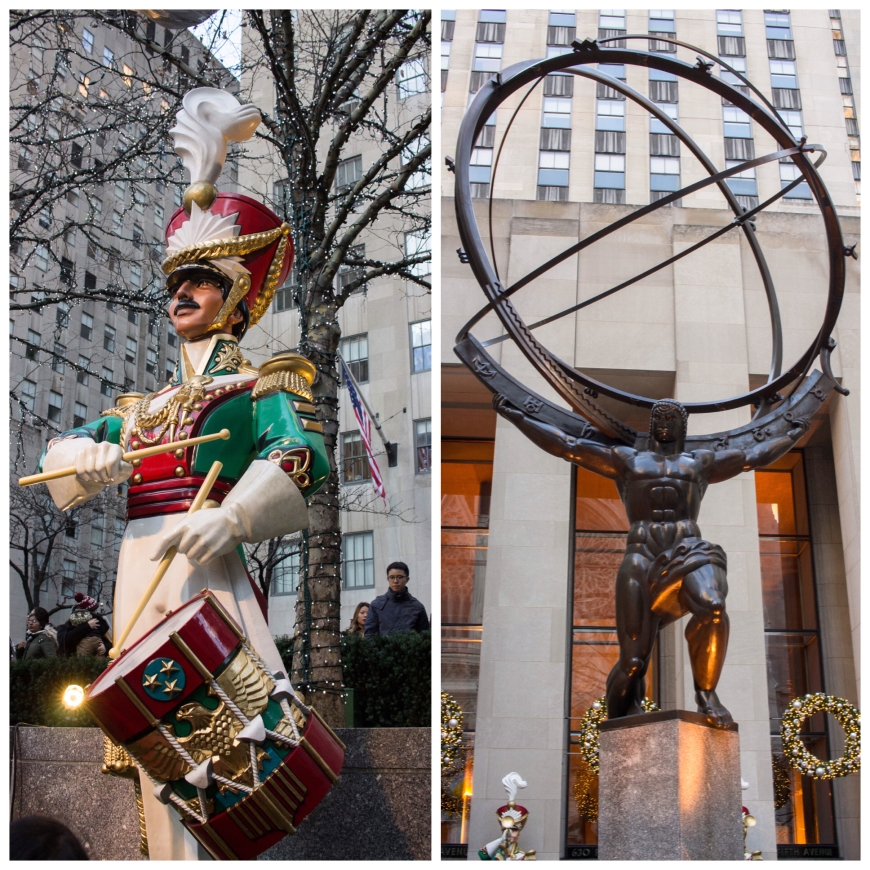 See the Rockettes in the Radio City Christmas Spectacular 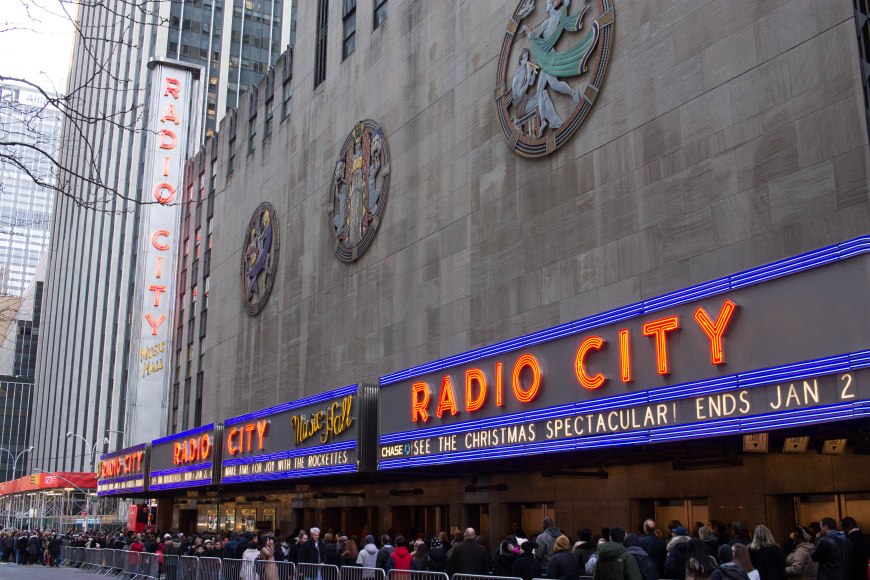 This show is so much more than the Rockettes’ famous kickline, although it certainly features that more than a couple of times. They also take you on a tour through NYC (thanks to a TV screen and 3-D goggles), perform their famous Wooden Soldier fall, and include a living nativity scene at the end. I have it on good authority that the show doesn’t change much from year to year, so I’m not sure I’d recommend seeing it more than once (although there are plenty of people who have a tradition of seeing it every year), but it’s a classic for good reason. 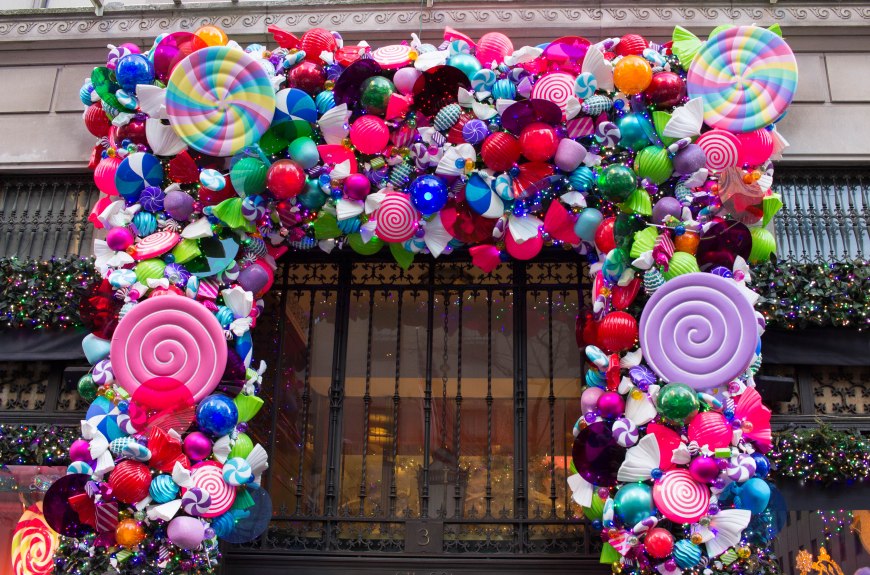 New York goes all out for the holidays, and its businesses are no exception. All the major department stores try to outdo each other with elaborate holiday window displays. My favorite this year was Saks’ blindingly bright candy-themed window, which was a much needed pop of color against the dreary gray skies. :)

Shop under the stars at Time Warner Center 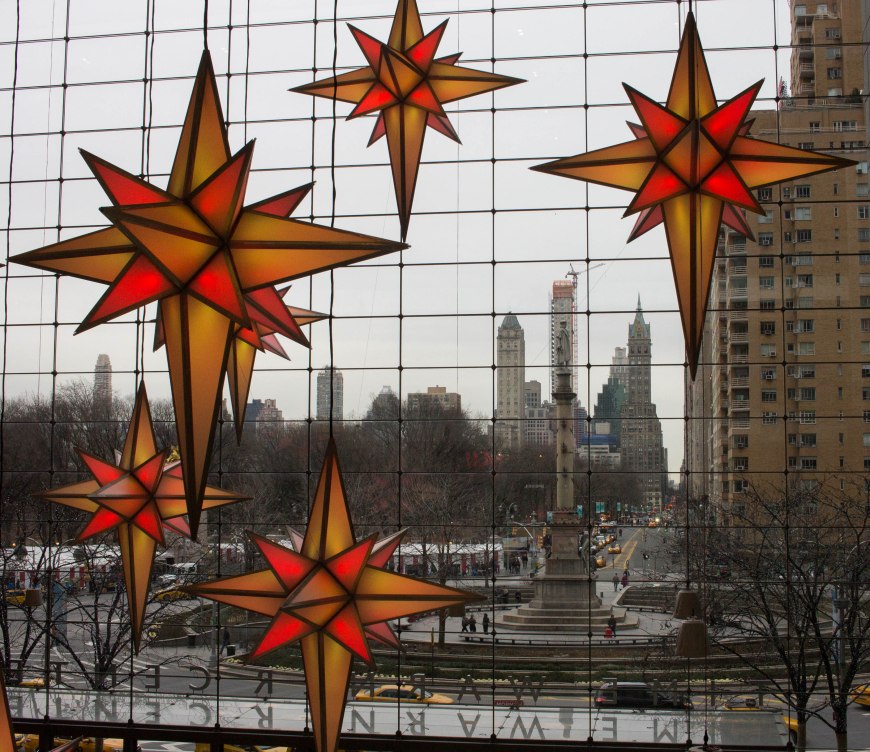 My favorite NYC holiday display is the array of light-up stars at the Time Warner Center. They change color every minute or so, and I can sit and watch them for ages. The stars hang in front of a floor-to-ceiling glass window that offers a great view of Columbus Circle and the southwest corner of Central Park. As an added bonus, TWC is home to two of my favorite New York dessert places, Bouchon Bakery and La Maison du Chocolat, although the LMdC there is just a kiosk with pre-made assortments – if you want an individual selection, you’ll need to visit one of the full-service locations. 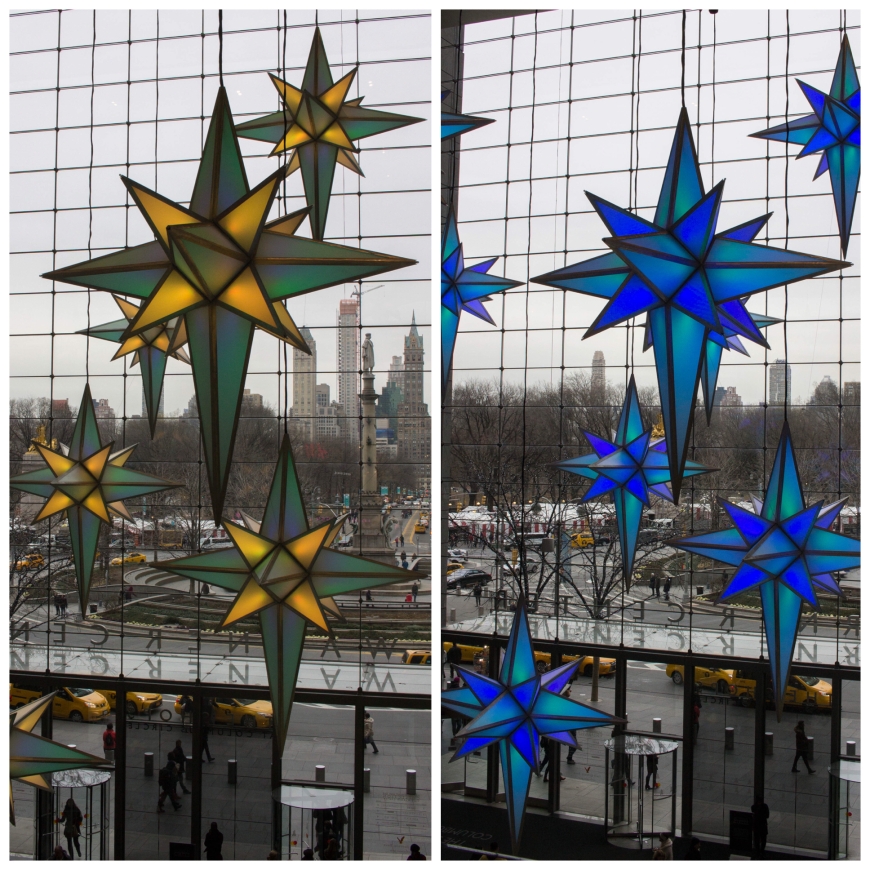 Really though, my favorite thing about NYC at the holidays isn’t any one attraction or holiday display. It’s the decorations that seem to be on every storefront and street corner, and the Christmas cheer that fills the air. Despite the crowds, it’s definitely one of my favorite times of year to visit the city. 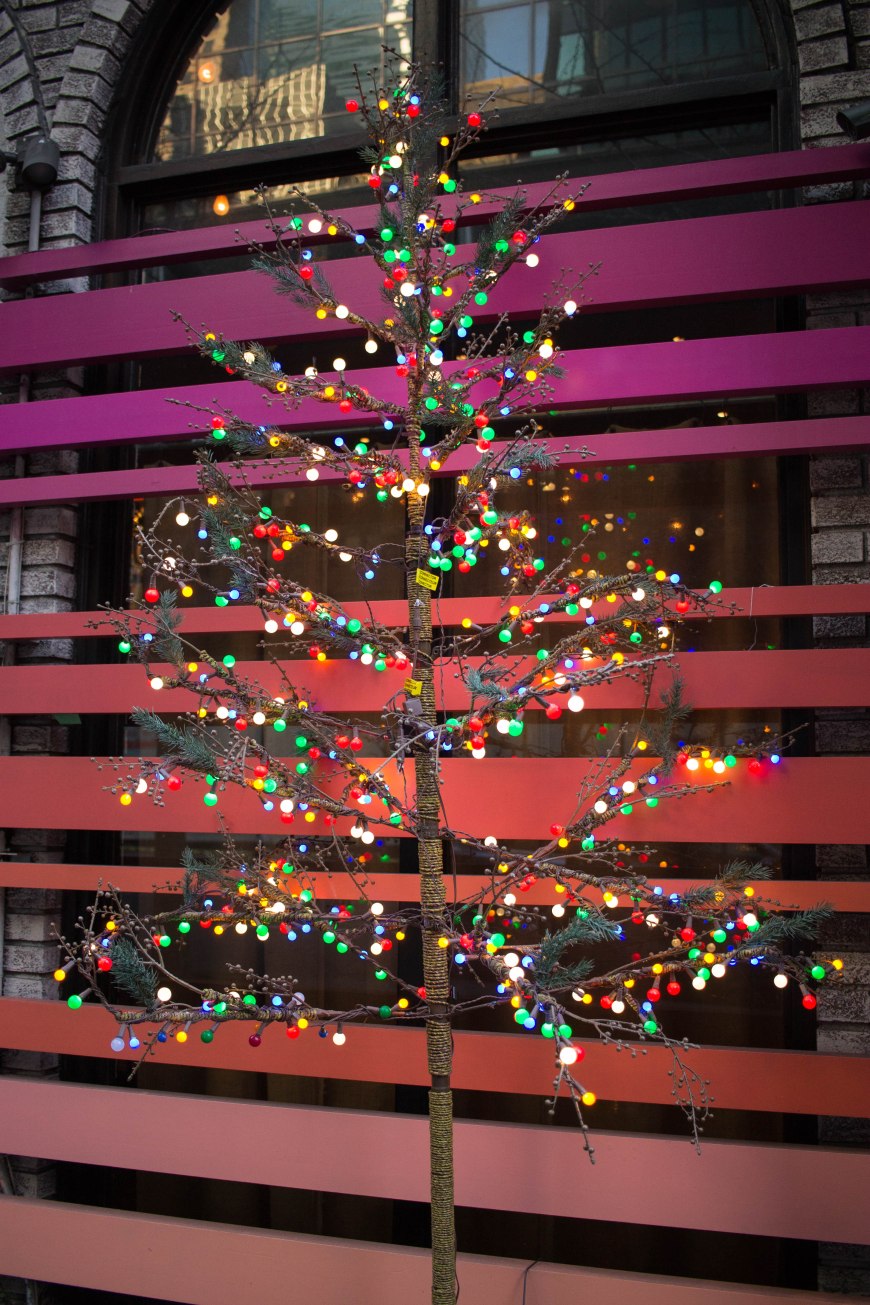