You know I don’t hesitate to build trips around food, but it’s always nice when a city offers more than just great restaurants. New Orleans is the perfect example of a place with incredible food but also a lot of fun activities to pass the time in between meals, even if you’re not into the party scene the city is famous for. I was in NOLA for three and a half days on my recent trip, and found plenty to keep me busy when I wasn’t eating. Here are a few of the things I recommend doing in New Orleans!

Hang out in Jackson Square 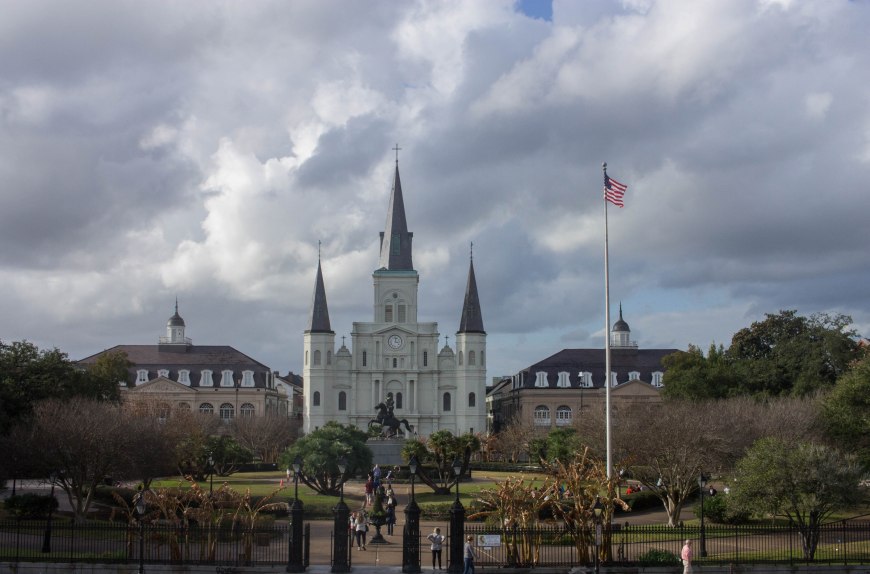 Home to the iconic St. Louis Cathedral, the oldest cathedral in North America, Jackson Square feels like the heart of (touristy) New Orleans to me. On a beautiful day, it comes alive with musicians, artists and fortunetellers doing their thing. This isn’t a place you should just breeze through en route to your next destination: it deserves to be soaked up, and there’s plenty of opportunity to do so, thanks to the benches in the park in front of the cathedral and the many restaurants lining the square that offer outdoor seating. The square is also home to the Louisiana State Museum, which is built on the site where the Louisiana Purchase was signed, and which I would have liked to have visited if I’d had just a little more time. And if you need another reason to visit, the original location of Café du Monde is located on the square’s northeast corner.

Admire the stately homes in the Garden District 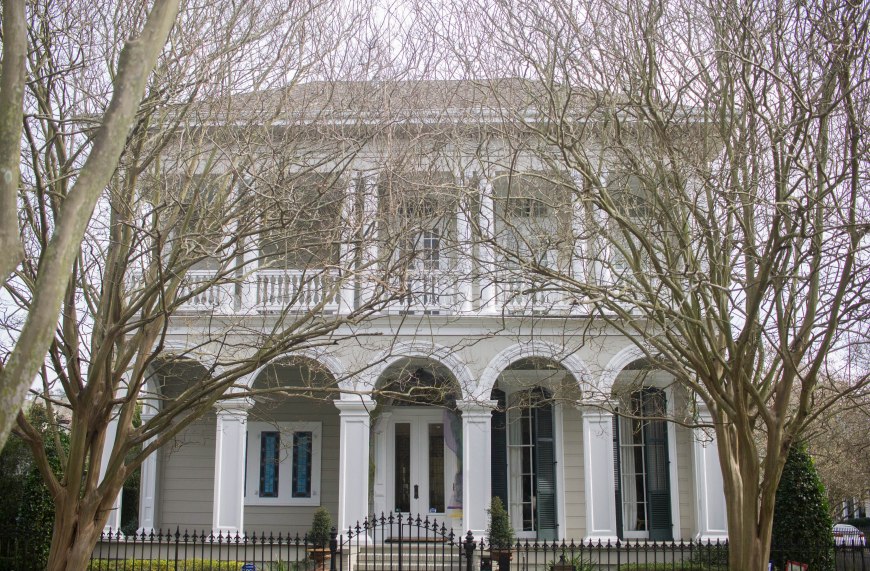 The French Quarter gets all the tourist love, but my favorite NOLA neighborhood is probably the Garden District, which is filled with beautiful mansions and greenery. This area is a little out of the way from many of the common tourist attractions, but it doesn’t take long to explore and is filled with great restaurants so just find a place to eat here and head over an hour or so before your dinner reservation. As an added bonus, from the French Quarter you can take the historic St. Charles Avenue streetcar right to the heart of the Garden District – it’s convenient, cheap ($1.25 each way) and an attraction in and of itself (a National Historic Landmark!), since it’s the oldest continually operating streetcar line in the entire world. 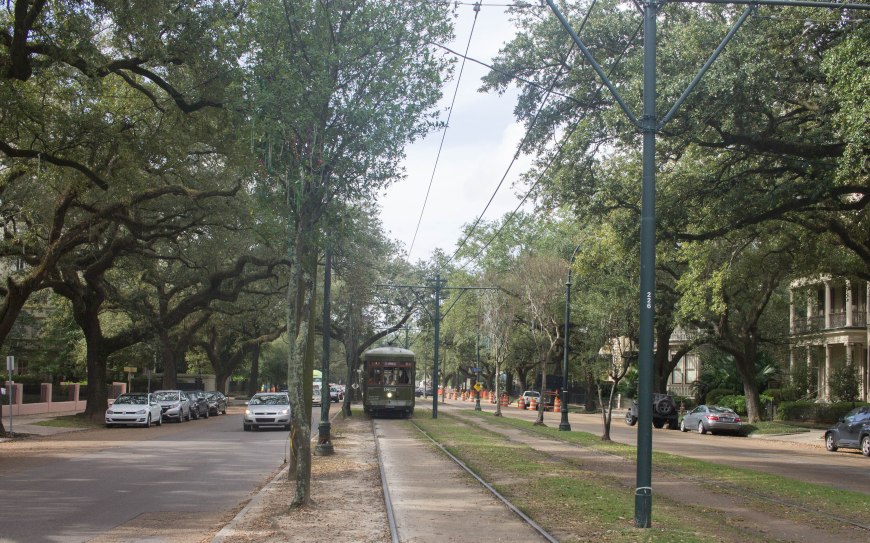 History was never my best subject in school, so I was surprised by how much I enjoyed this paddlewheeler cruise to the battlefield where the Battle of New Orleans was fought. The boat trip isn’t that long, and between admiring the New Orleans skyline from the water and listening to the guide’s engaging narration about the history of New Orleans, the Louisiana Purchase and the War of 1812, it flew by. The battlefield itself has a small museum and gift shop, as well as a monument you can climb up for an aerial view. Best of all, the entire excursion takes less than three hours, so it’s a great way to get out of the city for a little bit without killing an entire day. 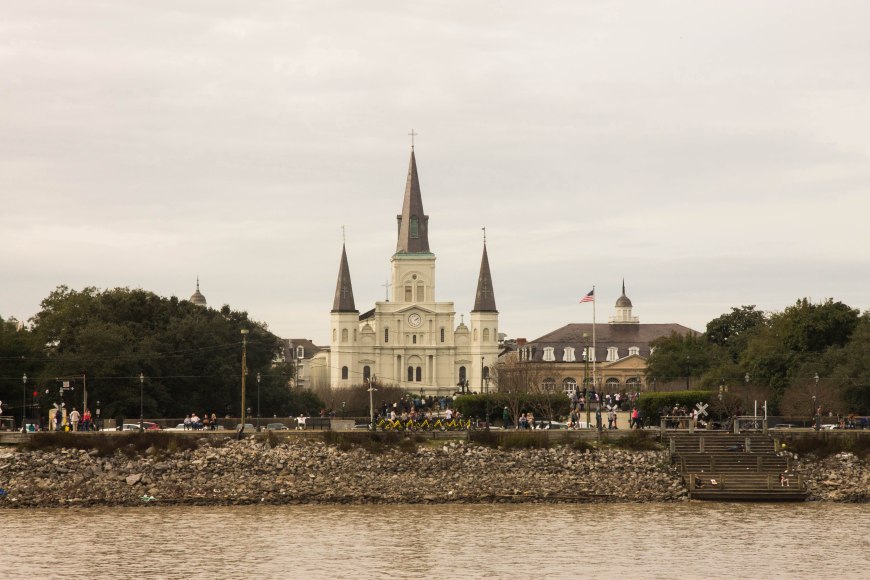 Take a walking tour of the French Quarter

I normally eschew guided tours in favor of exploring on my own, but I really enjoyed the guided walking tour of the French Quarter I took with New Orleans Legendary Walking Tours. The tour moved along at a very good pace (so much so that I sometimes had to run after the group after stopping for too long to take photos), and the tour guide managed to show us parts of the French Quarter I hadn’t really noticed even after walking all over it for two days, including Pirate’s Alley, where the author William Faulkner lived, and St. Louis Street, with its seemingly endless row of brightly colored houses. Our guide was also really knowledgeable about the history of New Orleans and the French Quarter. Did you know that most of the architecture in the Quarter isn’t French at all, but actually Spanish? The original French settlers built wooden houses that burned down in major fires in the late 1700s, and at that time New Orleans was a colony of Spain, so the Quarter was rebuilt in Spanish style. (As soon as our guide explained that, it made perfect sense to me because I had been thinking about how much the wrought iron balconies reminded me of the architecture in Havana.) 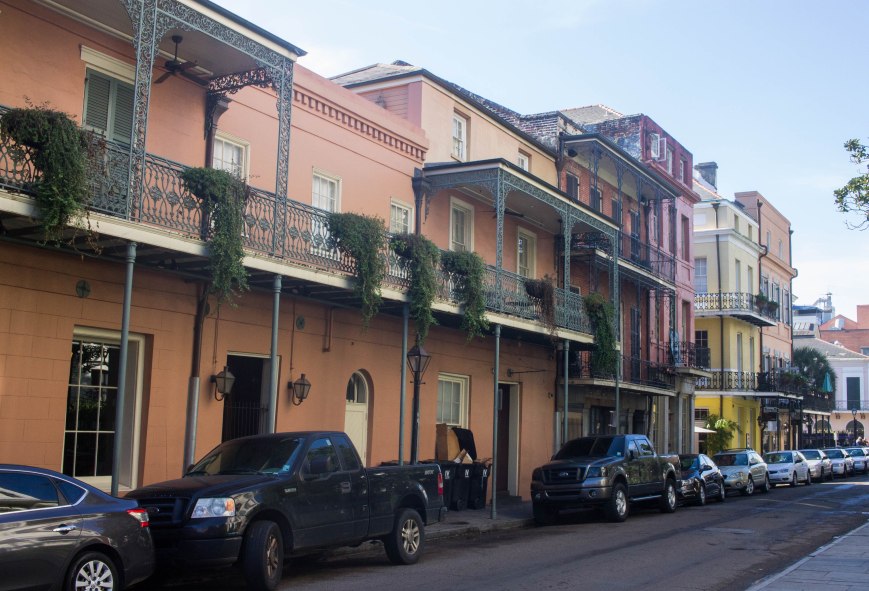 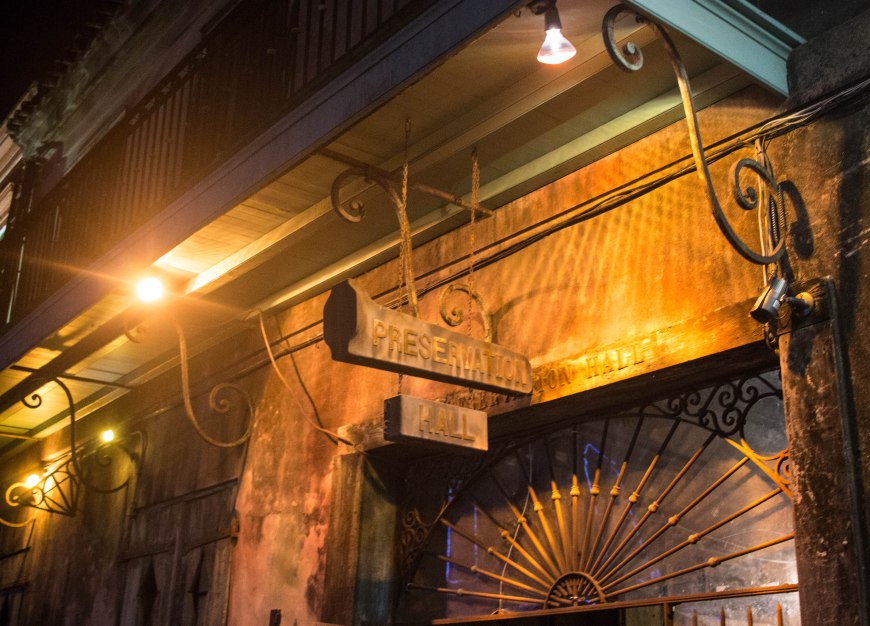 This is one of the most obvious things to do in New Orleans, and also one of the easiest to check off your list, between the omnipresent street musicians, restaurants that serve up live music with their eggs Benedict and the jazz clubs along Frenchmen Street. For an authentic jazz experience with a dose of local history, pay a visit to the famous Preservation Hall. If you have some patience and are willing to wait in line for about an hour (and stand for the hour-long show) you can score $15 tickets to one of the three nightly shows here, which is what I did. (If you’re not up for the wait you can purchase reserved seats starting at $35, but I actually thought standing in line was kind of fun – there was a sense of camaraderie among all the people waiting, and we enjoyed some fantastic people-watching thanks to the Bourbon Street bars and the Voodoo shop across the street.) Even my very untrained ear could tell that the Preservation Hall Jazz Band is incredible, and – despite the description of the venue as a “hall” – it’s about the size of a large living room, which means even in the $15 “nosebleed” seats you won’t be more than 20 feet or so from the musicians. I missed this place on my first trip to New Orleans and am so glad I caught it the second time around. 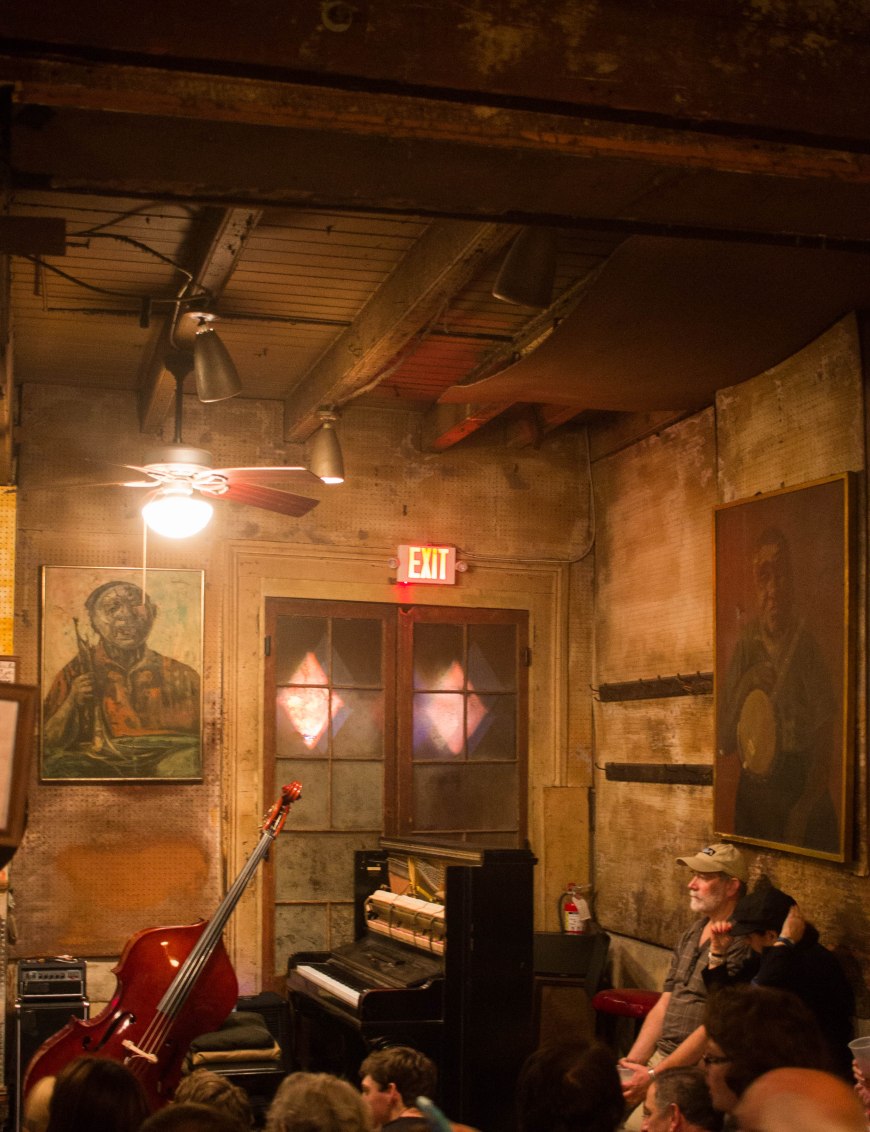 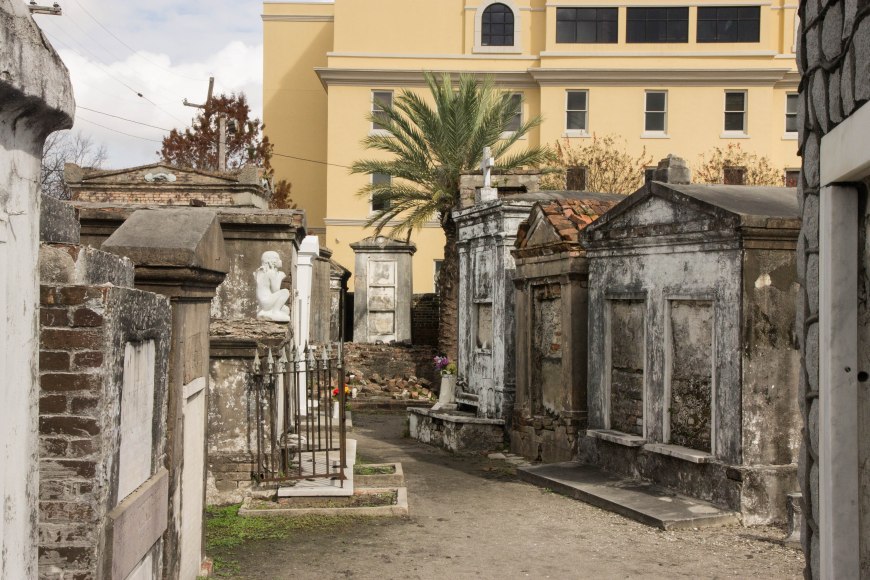 Touring cemeteries isn’t normally at the top of my list of things to do on vacation (or ever, really), but it’s A Thing here, thanks to the New Orleans tradition of burying the dead in elaborate above-ground tombstones. There are a whole bunch of different cemeteries you can visit, some of which are free and open to the public and some that require a tour guide to see. I visited St. Louis Cemetery No. 1 (which falls into the latter category) as part of the French Quarter walking tour I did. One of the notable things about this cemetery is that the actor Nicolas Cage has purchased a giant pyramid shaped tomb here to be his final resting place. Other celebrities who are actually already buried here include Voodoo queen Marie Leveau and civil rights activist Homer Plessy, the plaintiff in the Supreme Court case Plessy v. Ferguson that made “separate but equal” the law of the land until Brown v. Board of Education. 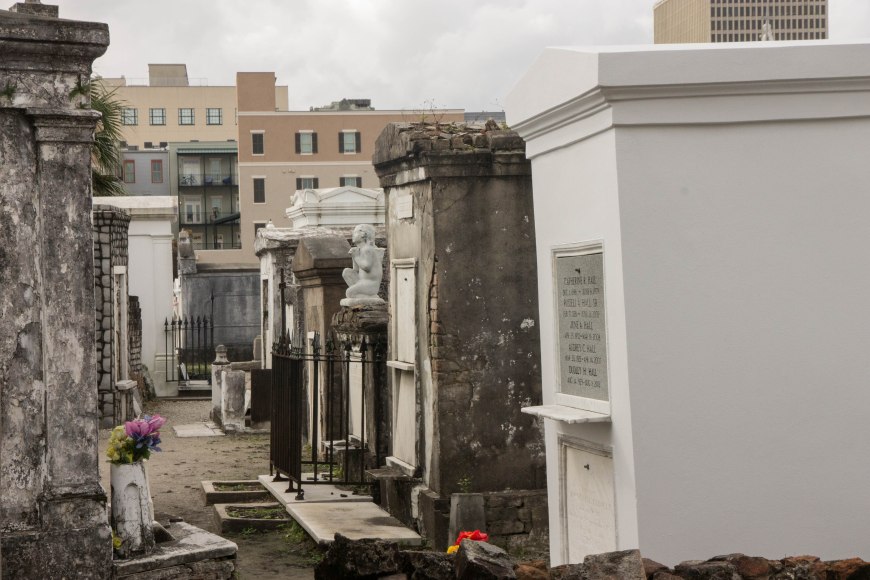 Even if you swear up and down that Bourbon Street is not your scene – I get it, it’s not mine either – you can’t come to New Orleans and not at least check out the craziness. By day, this street is mostly distinguishable from the others in the Quarter by its many neon signs and the fact that the streets are freshly washed every day (evidence of the previous night’s debauchery) – oh, and also maybe by a wire hanging overhead with a random pair of shoes and some Mardi Gras beads thrown over it…? 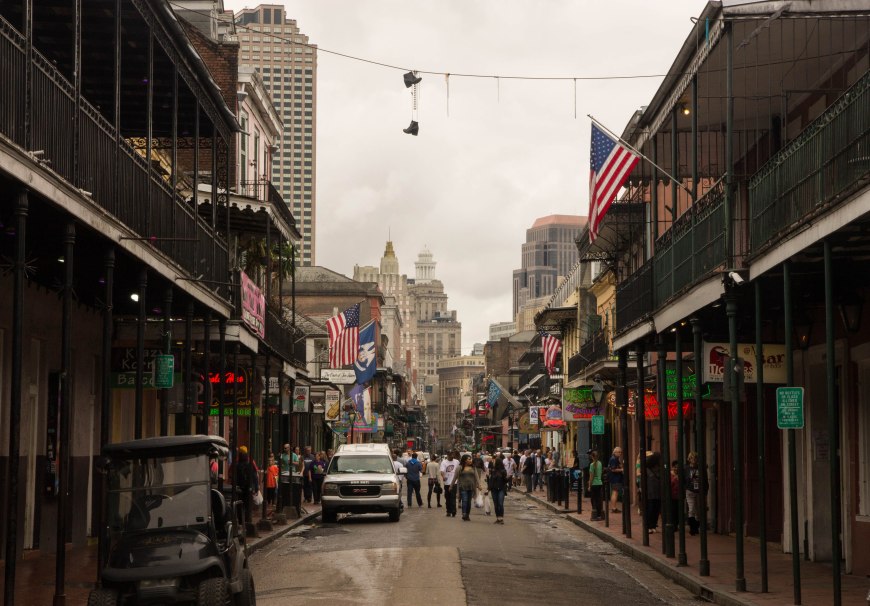 But at night, especially on a weekend, Bourbon Street transforms as all the neon lights up, music pours out of the bars and clubs and it fills up with mobs of people. It’s a sight to behold, even if only for a few minutes.

Have you been to New Orleans? What would you add to my list?