Whenever I head to the Indianapolis area I tend to naturally gravitate towards the city itself, but I know that the cities just north of Indy have a lot to offer too – and they’re actually closer to my home and more convenient for me to visit. So I was super excited when Visit Hamilton County invited me to explore a few of their communities through one of my favorite subjects: food!

We began our day in Hamilton County at Return of the Mac, a macaroni and cheese festival that’s been making its way around Indiana to great acclaim. The latest iteration took place in Noblesville’s Federal Hill Commons park and featured unlimited samples of mac and cheese creations from 30 different restaurants, many of them based in Hamilton County. Not only was it a chance to stuff my face with many different versions of one of my favorite foods, but it also gave me a long list of new restaurants to try next time I’m back in the area.

There were so many delicious varieties that it was hard to narrow down my favorites, but I think my top three were the classic mac and cheese with shells from Joella’s Hot Chicken, the organic kale and goat cheese mac from Pure Eatery and DeLullo Trattoria‘s pesto mac and cheese. 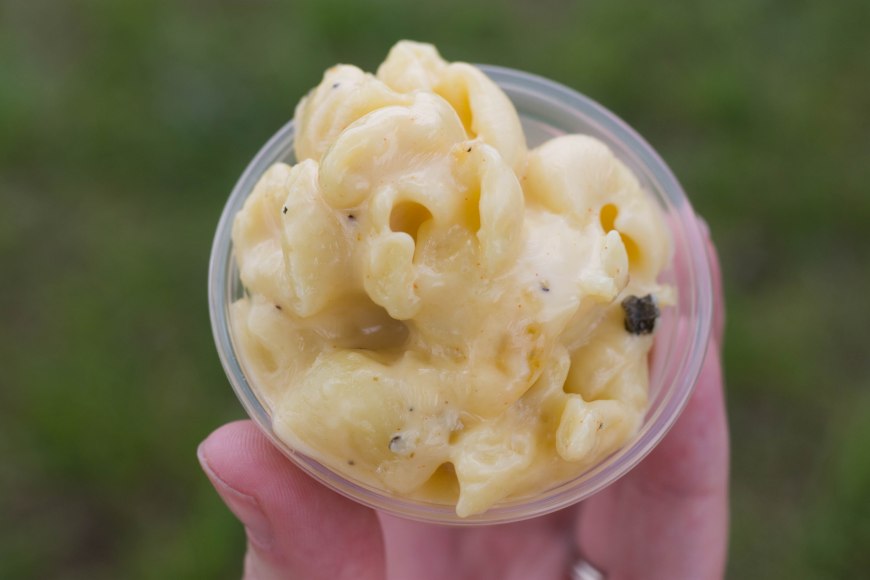 I thought the most creative mac and cheese dish was Rail Epicurean‘s “Cuban sandwich” version, with pork belly and homemade pickle relish.

Return of the Mac was outdoors and pet-friendly, which meant Dancer was able to come along too (she was happier about it than she looks, I swear).

Going somewhere else to eat might not seem like the most logical thing to do after hitting an all-you-can-eat food festival, but, as anyone who knows me knows, I have an entirely separate stomach for desserts. So after leaving Return of the Mac, we headed to Four Day Ray Brewing in Fishers to check out their legendary sweets. They did not disappoint! We shared the sugar cream pie, a Hoosier specialty that I had somehow never tried before and will now be eating every chance I get, and the ice cream sandwich of the day, which was salted caramel ice cream between very dark chocolate sea salt cookies. Both desserts were incredibly delicious and so worth being a little too full on the drive home.

Four Day Ray is also pet-friendly with a gorgeous outdoor patio and staff that doted on our pooch. We look forward to coming back and trying more of the menu!

Thanks, Visit Hamilton County, for a yummy day!

Disclosure: We were hosted by Visit Hamilton County at Return of the Mac Noblesville and Four Day Ray Brewing. As always, my opinions are entirely my own.

One thought on “Feasting in Indiana’s Hamilton County”