After spending a day doing the Sentiero Azzurro between Monterosso al Mare, Vernazza and Corniglia, we devoted our second full day in Cinque Terre to hiking between Corniglia, Manarola and Riomaggiore. Since we were staying in Manarola, we hiked from Manarola to Corniglia along trail nos. 506, 586 and 587, took the train from Corniglia to Riomaggiore and then hiked home from Riomaggiore to Manarola along trail no. 531. (As I mentioned in my first post about hiking in Cinque Terre, all the non-Sentiero Azzurro trails are free, so we didn’t need to buy a Cinque Terre card for this day.)

The trail begins in the part of Manarola that’s far from the harbor, so as you start the climb you’ll have views of the less touristy parts of the village, which are still charming and full of brightly colored homes. 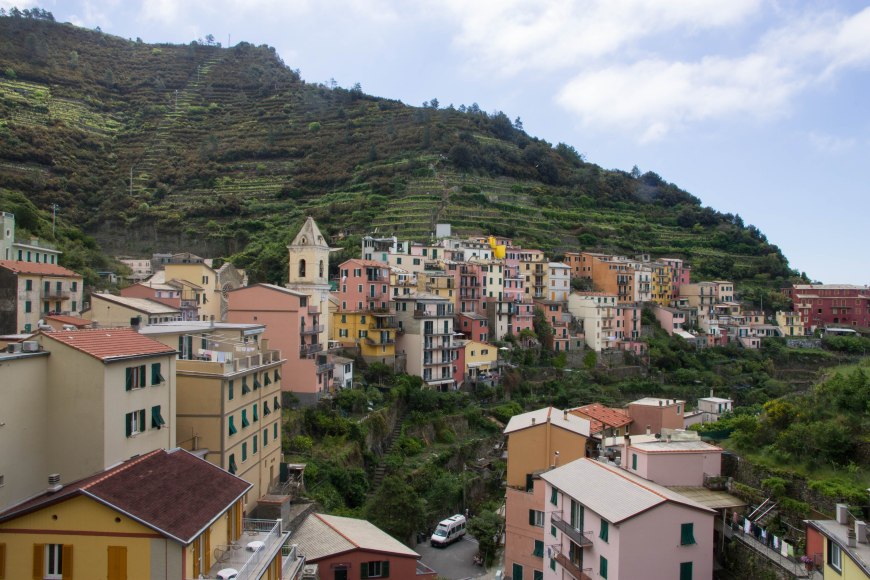 Shortly after beginning the hike, we passed a sign that mentioned Volastra (a tiny town in between Manarola and Corniglia that isn’t one of the official “five lands”) and Corniglia, but the sign said “Panoramico” and didn’t have the trail numbers or the red and white blaze that indicates the trails, so we assumed (wrongly) that it was just a scenic overlook. Since the trail looked really steep that way, we figured we could live without seeing the overlook and continued on our merry way. After about 10 or 15 minutes the trail we were on started to descend and we realized we had made a wrong turn and turned around. I can’t say I minded the small detour though, since we had some very nice views of Manarola on the way.

Lesson learned: when you see this sign, follow it! (Assuming you’re trying to reach Volastra or Corniglia, of course). 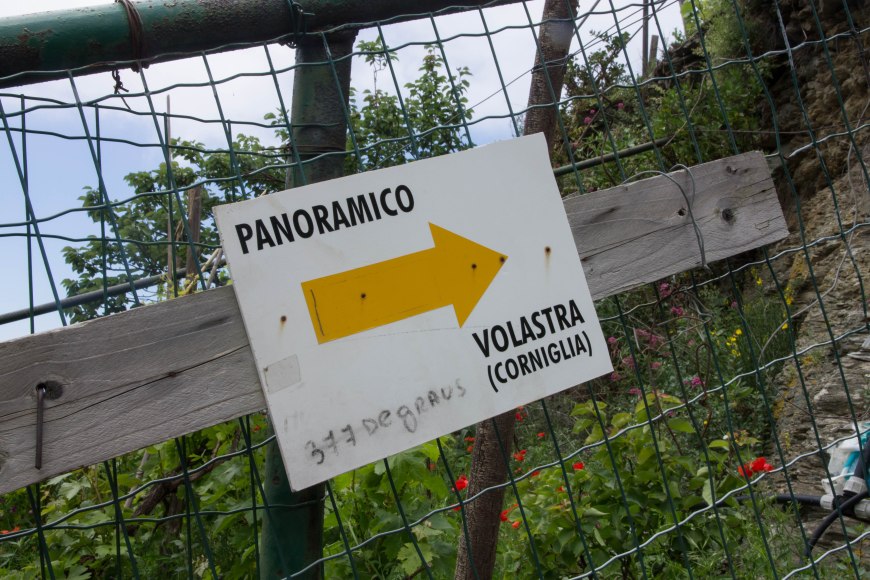 The trail became really brutal and steep here (something that was visible even from down below, which is why we had skipped it when we thought it was an overlook), but we continued to hug the coastline and were treated to beautiful views of the coast and the vineyards we were winding through. The Sentiero Azzurro definitely has a reputation as “the coastal trail” but I felt like we were as close to the coast on this part of the hike as we were anywhere in Cinque Terre. 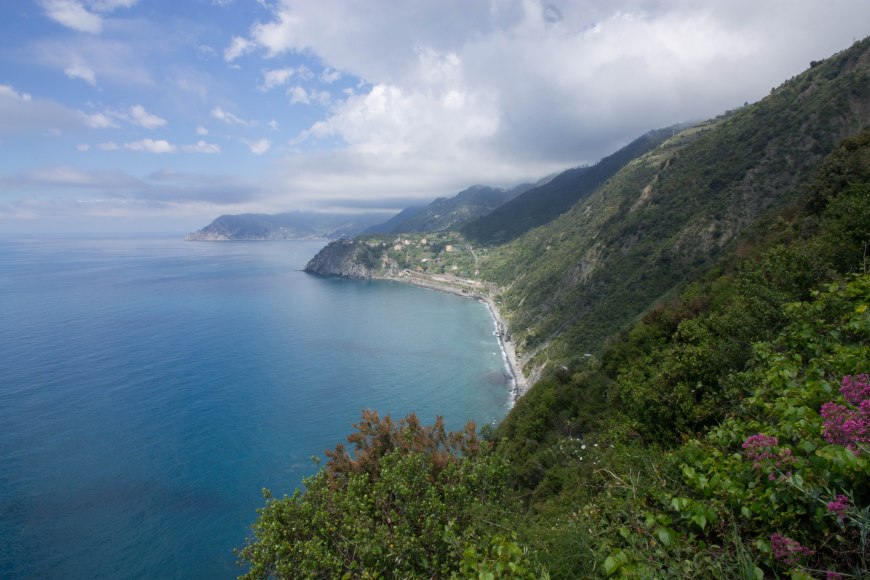 There were nice views of Manarola looking back too, although I think the best views of this village are from the town itself, especially from the promenade on the right side of the harbor.

In addition to the vineyards and coastal views, we saw a lot of plant and animal life along this trail as well. Besides the wildflowers that were all over the Cinque Terre trails, we spotted some interesting cacti and several small lizards.

The trail continued climbing steeply until we reached the charming little town of Volastra which was small enough to feel much less touristy than the major Cinque Terre villages, but big enough to have a grocery store (much to the relief of some thirsty hikers). 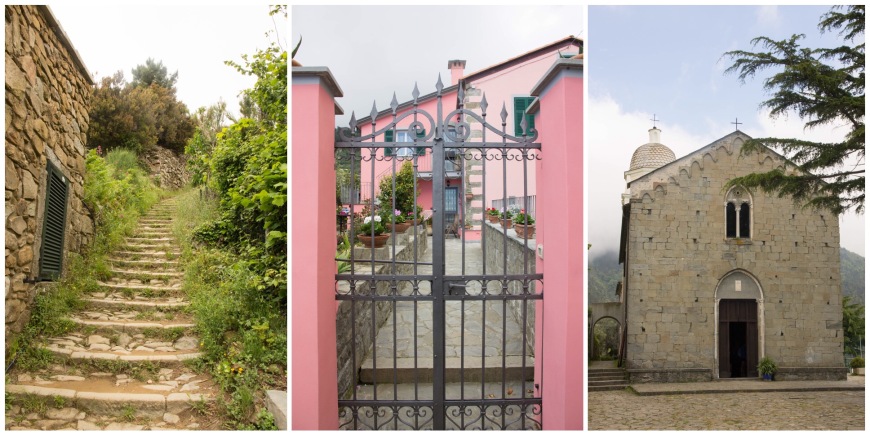 Trail 506 ended in Volastra and we set off to Corniglia on trail number 586. 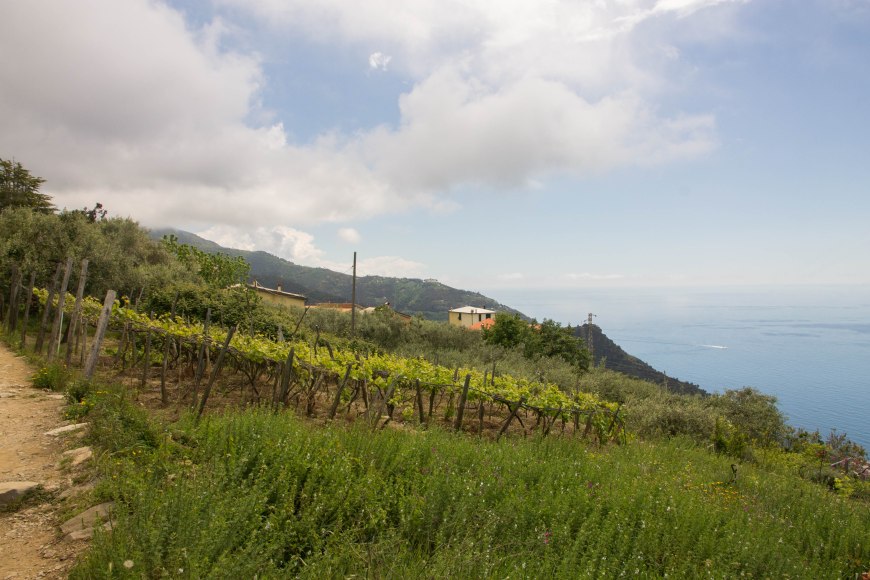 Soon we could see Corniglia in the distance!

Many of the Cinque Terre trails take you near vineyards, but this route goes more directly through them than the other hikes we did. You can clearly see how they’re built into steep terraces on the hillside. 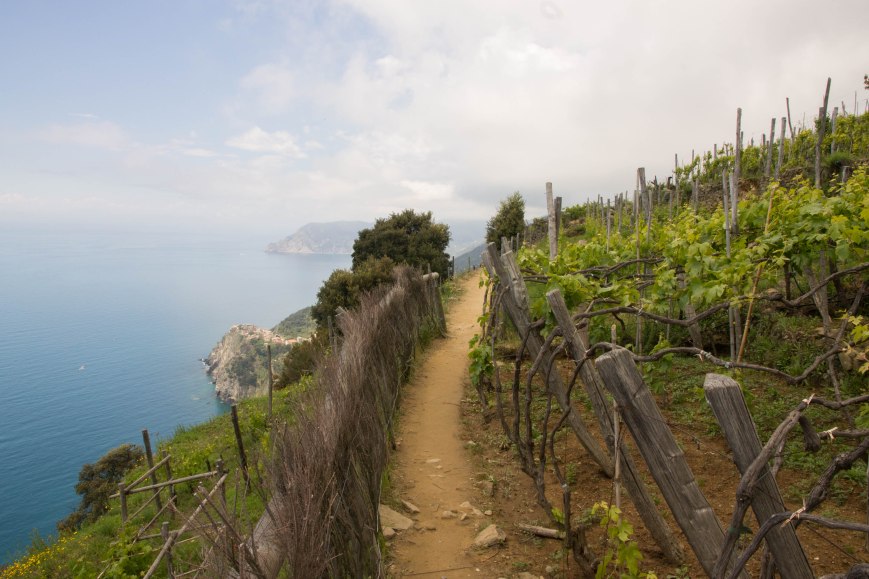 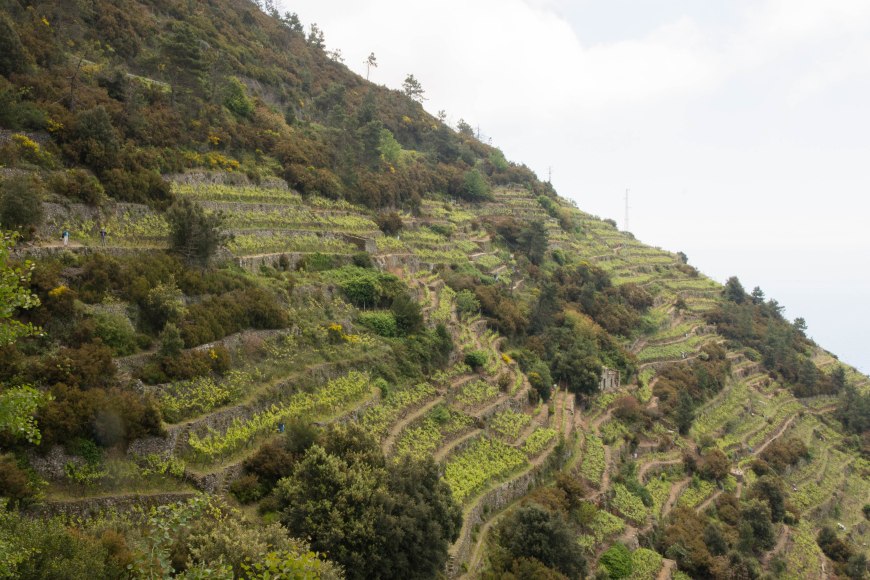 We eventually hit trail no. 587 and took that down into the village of Corniglia. I don’t have as many photos from this stretch of the trail, partly because it was more wooded and not as scenic, but also because the weather went from beautiful and sunny to a pretty spectacular downpour in a matter of minutes. Although things got a little slippery and muddy, it didn’t prevent us from completing the hike. And the flowers looked especially beautiful after the rain! 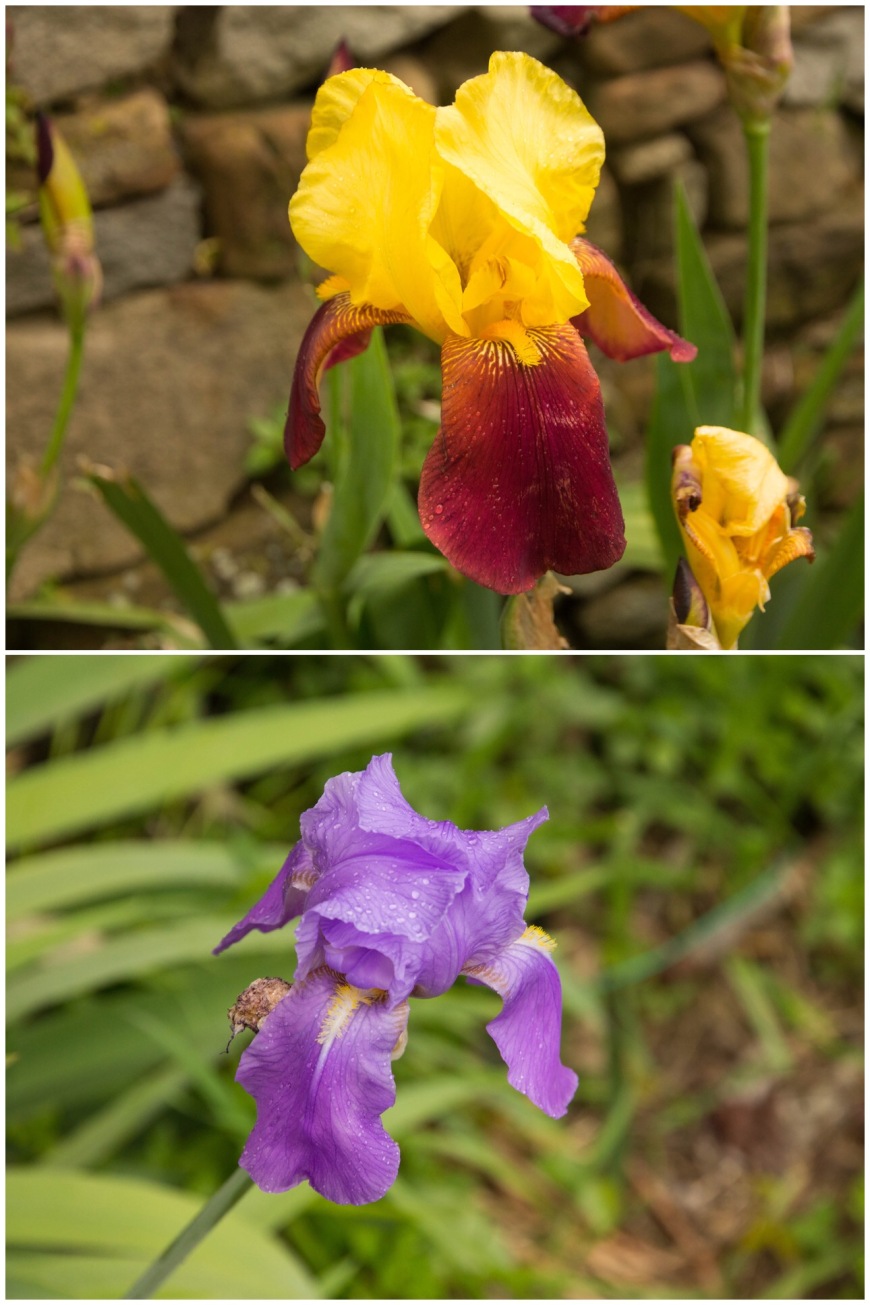 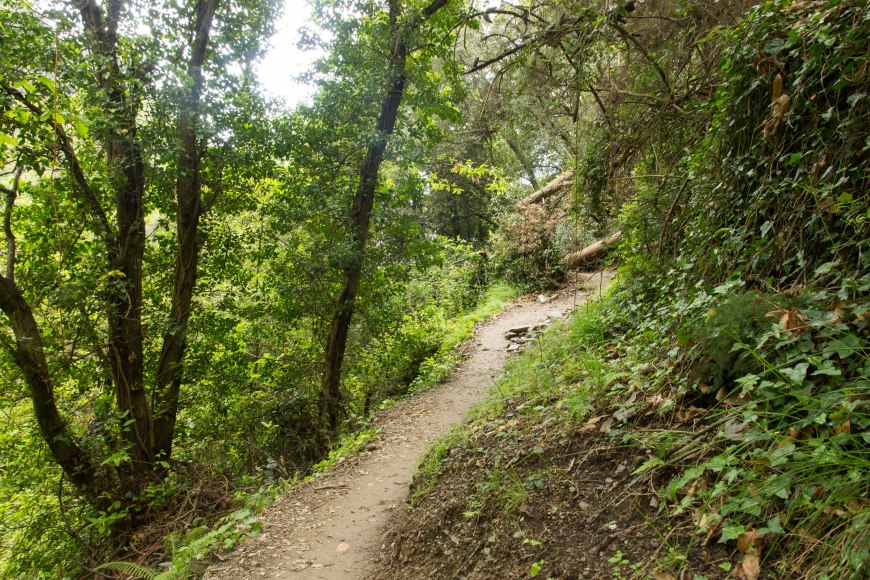 I really recommend this hike. Some of the scenery was similar to what we saw on the Sentiero Azzurro approaching Corniglia from the other direction, which is to be expected, but I loved hiking through the vineyards and getting to wander through Volastra.

Riomaggiore to Manarola via Trail No. 531 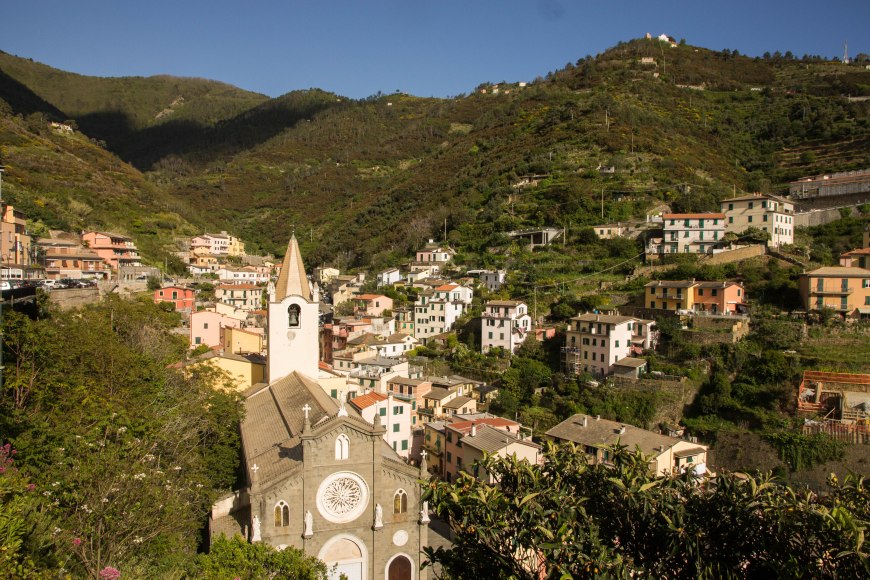 Manarola and Riomaggiore are the closest of the Cinque Terre towns. If you could walk between them along the coast (as you once could, on the part of the Sentiero Azzurro known as the Via dell’Amore, or “Lover’s Lane”), it would be a flat, easy, 30 minute walk. But since the coastal route is not available, going between them involves going inland and climbing over the large hill that separates the two bluffs. Because there isn’t really any significant amount of distance to cover, the trail pretty much just goes straight up the hill and then straight back down. It felt more like a StairMaster than any other trail we did, and the descent into Manarola was especially brutal on my knees (both sides were steep, but I think the Manarola side was steeper, so I recommend going from Manarola to Riomaggiore if you don’t like a steep descent). You don’t really get far enough away from either town for a panoramic view, but at least in Riomaggiore the trail sort of winds through the back part of town, taking you past some of the pretty buildings on the outskirts of the village. 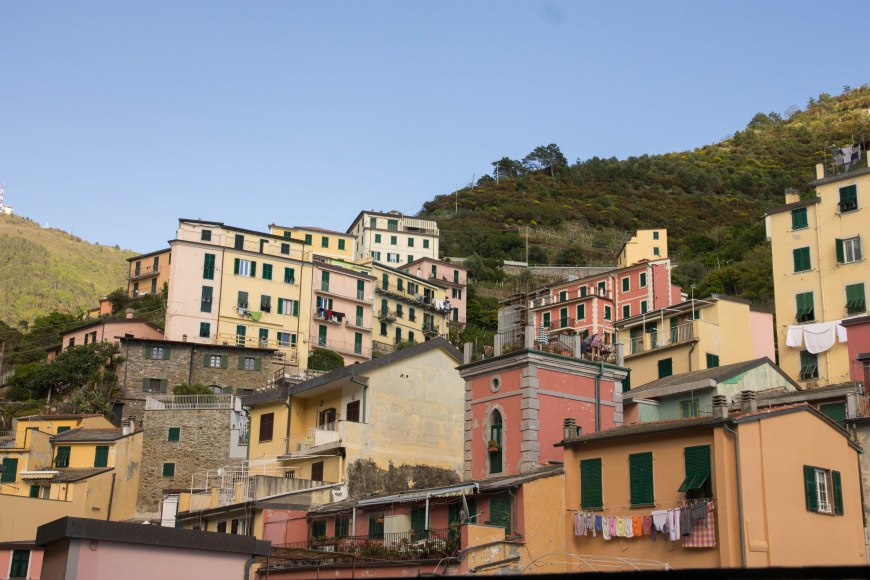 The trail does have occasional glimpses of the coastline and you do climb through some pretty vineyards, but in general, I didn’t find it nearly as scenic as the other three hikes we did in Cinque Terre. 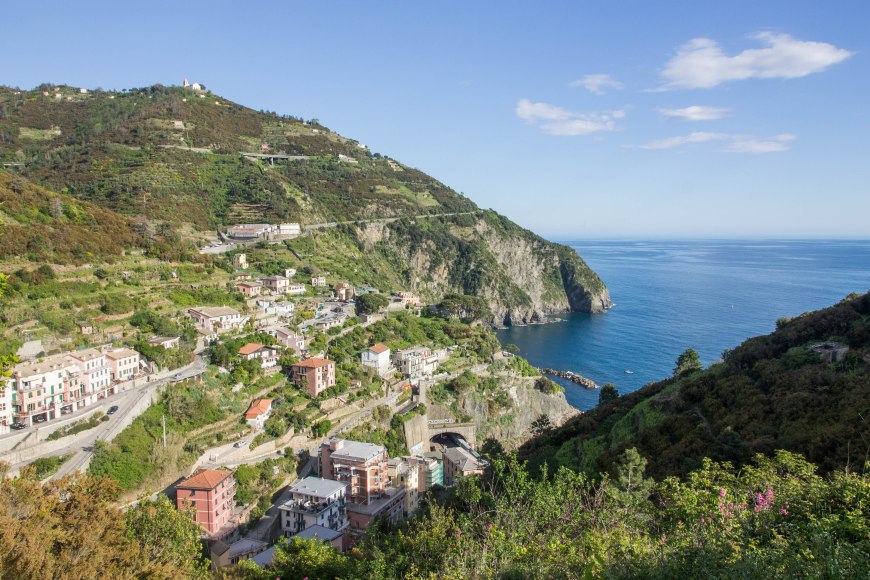 I’m glad I did this trail just so I can say I hiked between all five towns, but if you have limited hiking time, this is one trail you can skip without regrets.

Up next: where to eat in Cinque Terre! You’ll definitely need some fuel after all this hiking.