Like most first-time visitors to Rome, I had a visit to Vatican City near the top of my agenda. All my pre-trip research indicated that taking a tour was the way to go, and the earlier you can get there the better. As soon as I heard about LivItaly Tours‘ Vatican Early Entrance Small Group tour, which offers entrance to the Vatican Museums an hour before the public gets in and caps tour groups at six people, I knew it would be a great fit for what I wanted out of a Vatican City tour.

We met outside the gates of Vatican City at 7:15 am. I’m the opposite of a morning person, so the early start time was a bit painful but I’ll do just about anything in the name of avoiding crowds. We weren’t able to go inside until 8 am, but the time wasn’t wasted just standing around. Instead, our guide Sergio briefed our group – which was just four people including us – about what we would be seeing. It was a great chance to talk without having to worry about speaking in a museum-appropriate volume, and to get our questions answered in advance so that when we were inside we could focus on the art. 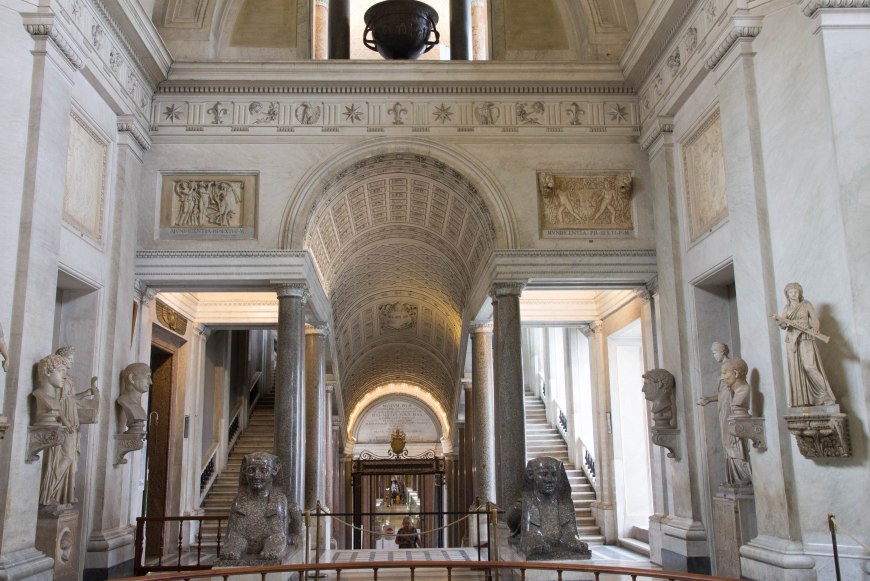 After a quick stop for surprisingly tasty coffee from the vending machines inside the Vatican (which was so appreciated since the early morning meant we’d missed breakfast at our hotel) we headed into the museum. You can walk inside the Vatican Museums for seven miles without retracing your steps, so I think it’s fairly obvious why a guided tour is essential to make sure you hit the highlights. We started by visiting sights like the Octagonal Courtyard, Dome of the Sala Rotonda and the Gallery of Tapestries. 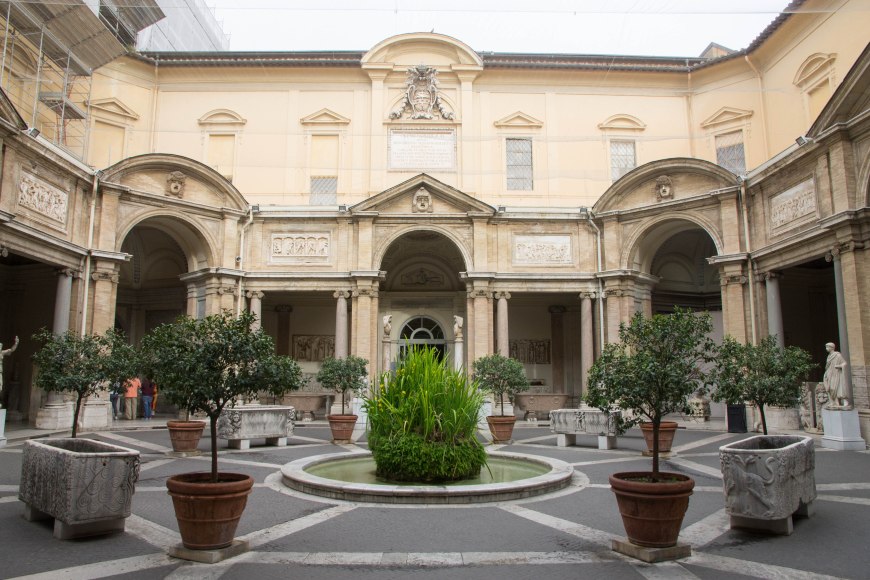 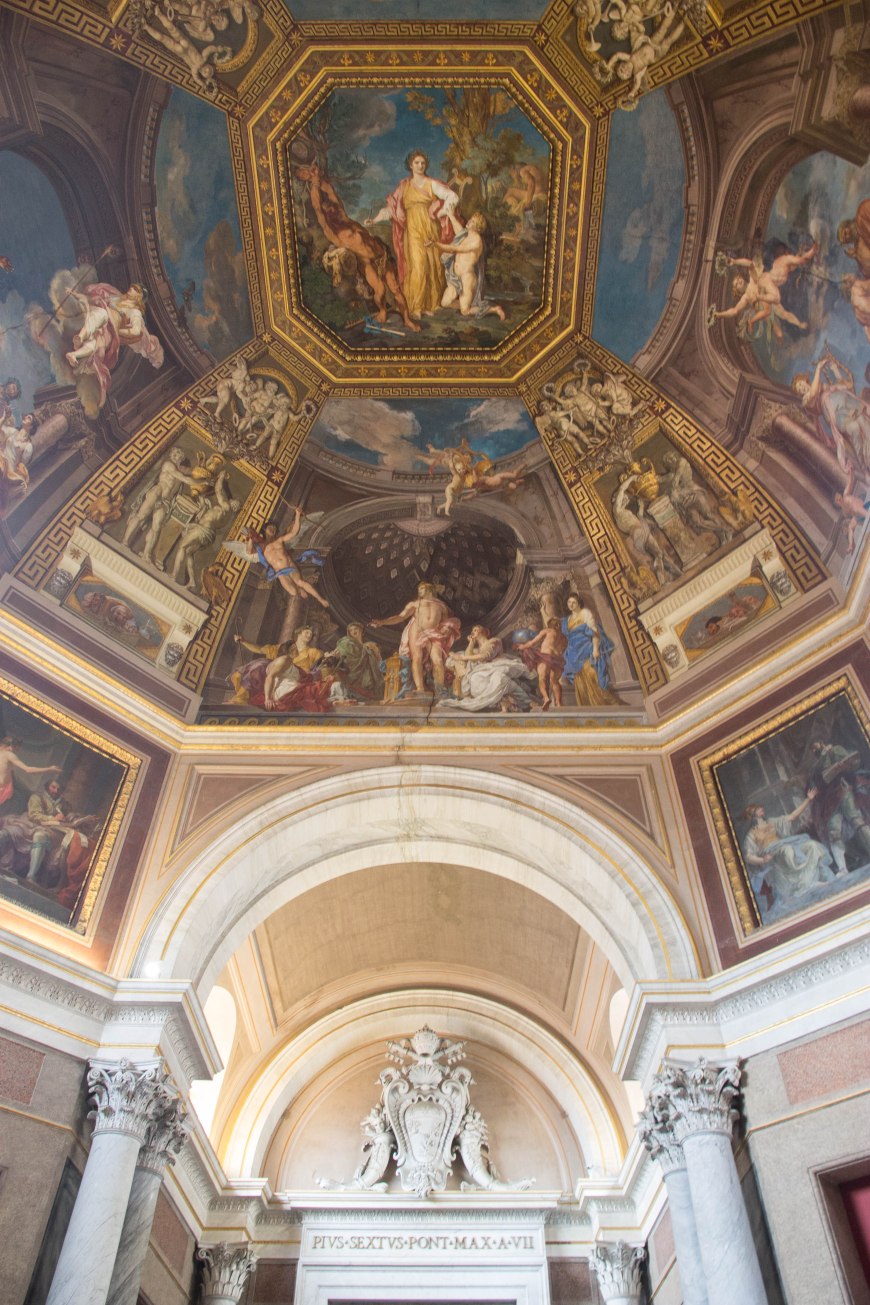 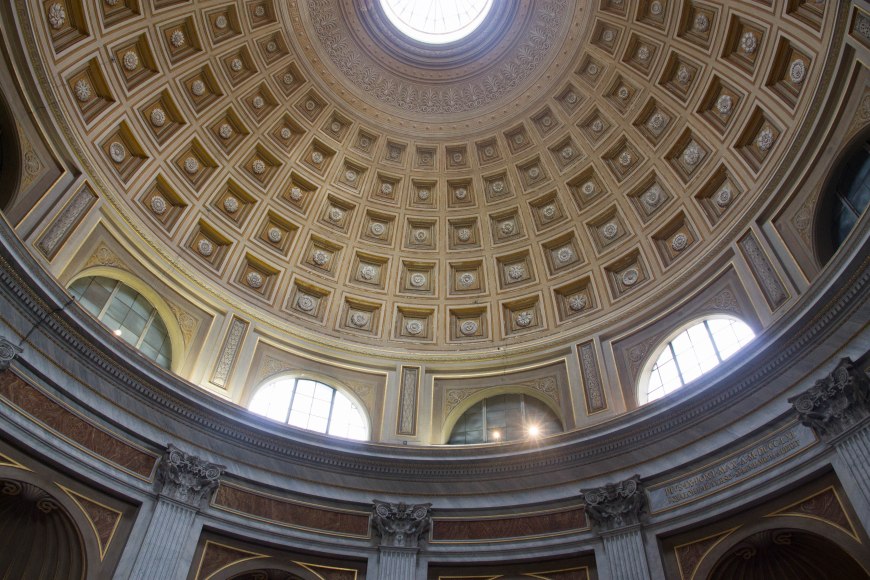 Don’t forget to constantly look both up and down, as so much of what makes the museum special is its intricate floors and ceilings.

My favorite room was the Gallery of Maps, which is home to not only all sorts of ancient maps of Italy (so interesting for a nerd like me!) but also the most beautiful gold-plated ceiling.

Our tour of the Vatican Museums concluded with a visit to the Raphael Rooms of the papal apartments, just about every square inch of which are covered in Raphael’s beautiful paintings. 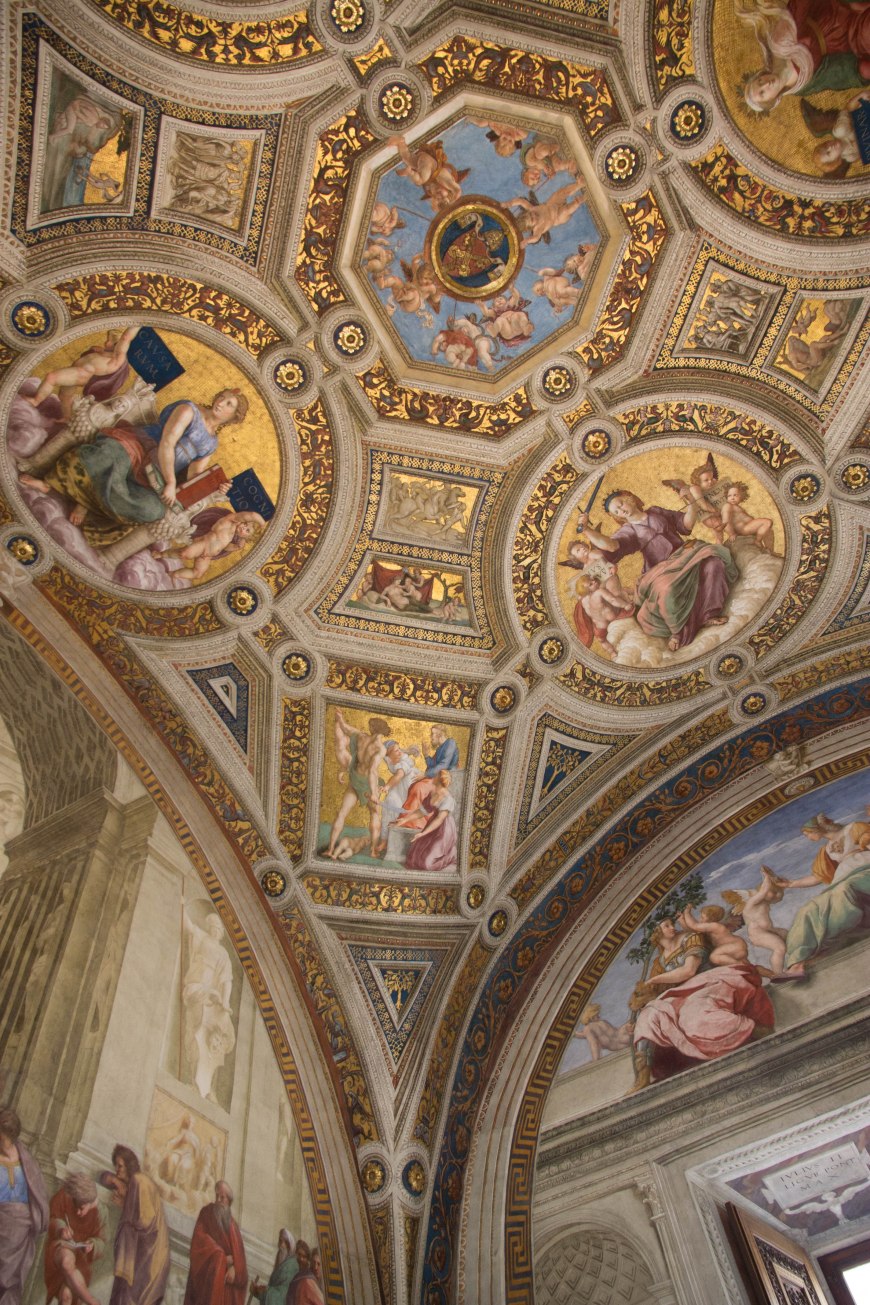 Then it was time for the most famous of Vatican sights – the Sistine Chapel! Even at the earlier hour, there were already quite a few people inside but there was plenty of space to sit down on the benches lining the walls and admire the view, and Sergio told us it was nothing compared to the crowds later in the day. We had as much time here as we wanted, and met at a designated point once we were ready to go. There are no photos allowed in the Sistine Chapel, and I was actually kind of glad for that, since it forced me to put my camera down and really appreciate Michelangelo’s masterpiece. Sergio had described all the frescoes of the chapel to us in advance (in a much more engaging way than my high school history teachers, I might add) and we were given this handy laminated card to take inside with us.

From the Sistine Chapel, we exited right into the stunning St. Peter’s Basilica, skipping the long line to get inside. St. Peter’s is free to visit even if you don’t have a Vatican museum ticket, but the lines deter many perspective guests. Sergio gave us a tour of the Basilica, which is the final resting place of many popes. 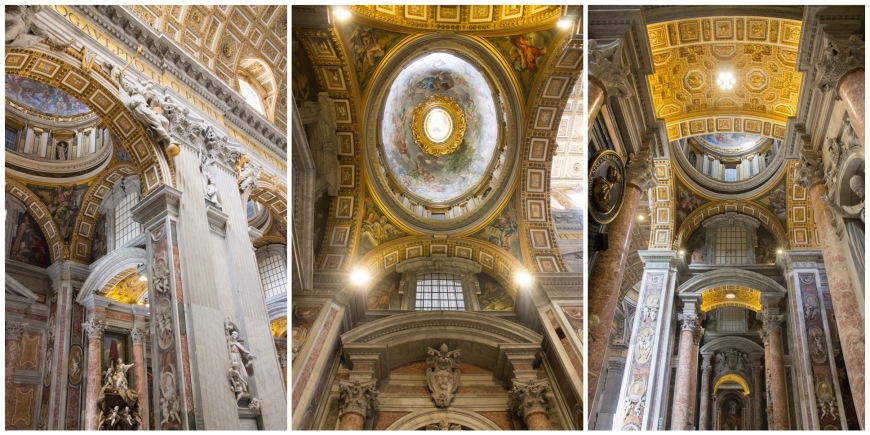 The tour does not include a visit to the top of the dome of St. Peter’s, but we did that on our own immediately after parting ways with Sergio, and since we were already inside there was no wait. Tickets are ‎€5 for adults (slightly more if you want to take an elevator part of the way) and although the climb is long and a bit claustrophobia-inducing, I definitely think it’s worth it. From the top you have really nice views of St. Peter’s Square and the Vatican Gardens, and you also get to see the dome up close from the outside.

When we were done with the dome climb we walked through St. Peter’s Square – stopping to admire the Basilica from the front of course – to the gates of Vatican City and back into Italy. It’s such a weird feeling to change countries just by walking across the street.

I’m a pretty independent traveler who doesn’t often join group tours, but if there’s one place in Rome I would recommend doing one, it’s Vatican City, and LivItaly Tours’ Early Entrance Tour is a great choice. I was impressed by Sergio’s extensive knowledge about the art and history and it was a really efficient way to visit all the Vatican must-sees with no lines and minimal crowds.

Disclosure: I was a guest of LivItaly Tours on this tour and my husband received a discount on his tour as my companion. As always, my opinions are entirely my own.

4 thoughts on “Beating the Crowds to Vatican City”