Until our recent trip to Rome, I’d never done an organized food tour, but I’ve always been curious about the concept. I mean, what could be better than spending a few hours strolling around a city while feasting on local delicacies? Since Italian food is probably my all-time favorite cuisine and Rome is a large city with about a billion restaurants (many of them touristy), I thought a food tour here would be the perfect way to orient ourselves to the city while starting our stay out on a delicious note. We decided to join The Roman Guy‘s Trastevere Locals Food Tour, which offered not only the chance to try lots of delicious Italian food, but also the opportunity to explore the charming Trastevere neighborhood, which is a little off the beaten path from many of Rome’s major tourists attractions.

We met up with our guide Luca in Piazza Farnese, not far from Campo de’ Fiori, which hosts Rome’s famous open air markets. Our first stop was a cheese shop, where we tried local cow’s and sheep’s milk cheese, including parmigiano-reggiano, pecorino romano, and my personal favorite, burrata, which was probably the richest, creamiest burrata I’ve ever had. It was all washed down with prosecco, of course, because you can’t taste cheese without wine.

From there, we walked to a tiny storefront called Filetti di Baccala that serves only its namesake specialty, fried cod that is a favorite Roman street snack and basically the only thing Romans will eat on the go. This looks a lot like the breaded fish in British fish and chips but tastes so much better (Luca told us the secret ingredient is sparkling water). It was probably my favorite dish of the entire tour, and although I didn’t eat this entire stack I totally could have.

From there, we headed across the river to Trastevere, to a local restaurant that prides itself on sourcing all its ingredients very locally. In the US this is usually called farm-to-table cuisine, but in Italy it’s more descriptively known as Kilometer Zero (the idea being that the food has traveled almost zero kilometers to get to your plate). Here we tried bruschetta with different spreads as well as more cheeses and an assortment of meats with homemade balsamic vinegar and jams.

Our next stop was for pizza al taglio, pizza sold by the slice that is a Roman favorite. I love pizza with creative toppings but nothing beats a piping hot slice of cheese pizza fresh from the oven and this really hit the spot.

Up next was our most substantial meal, where we sat down at a restaurant and feasted on bread, wine, bruschetta, parmigiana (what Americans know as eggplant parmesan – much to my disappointment, Luca told us that the versions with chicken and veal were invented by Italian-Americans and are not eaten in Italy at all) and two kinds of pastas that are native to Rome, cacio e pepe and pasta amatriciana. 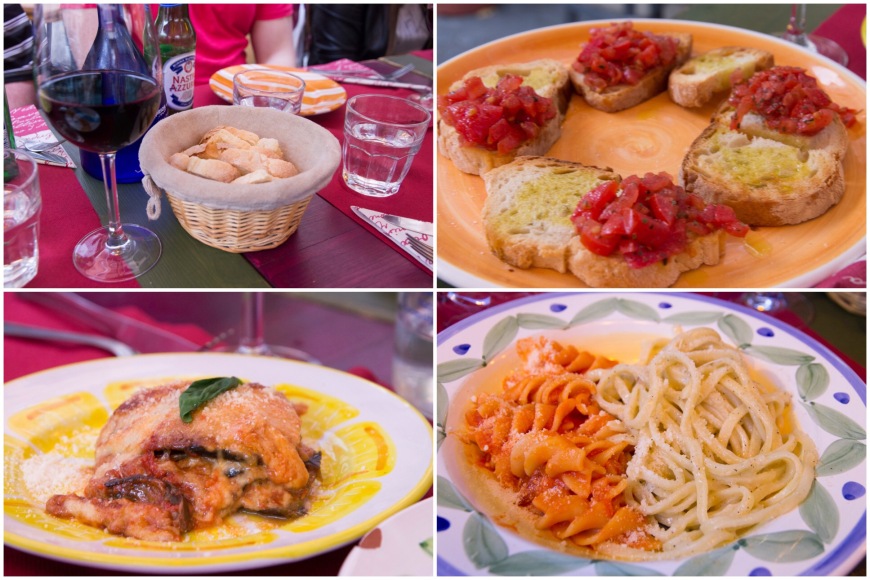 Of course, no Italian meal would be complete without gelato, so we ended our night at a local small-batch gelateria where I enjoyed delicious chocolate and crema gelato, and Luca told us how to distinguish authentic, homemade gelato from the mass-produced imposters. In case you’re wondering, the real stuff is roughly the same color as the ingredients that go into it – so, for example, banana gelato should be an unappetizing gray-ish color, not a cute, bright yellow – and it should not be stacked high above the rim of the tub it’s kept in.

In case it wasn’t clear from the photos and descriptions above, we got quite a bit of food over the course of the three hour or so tour. Add in freely flowing wine at most of the stops, and The Roman Guy definitely lived up to their “nobody goes home hungry” guarantee! We did this tour on our very first evening in Rome, and I was glad we did, since Luca not only gave us a great introduction to many of Rome’s signature dishes, but also lots of tips for avoiding foodie tourist traps during the rest of our stay. Thank you Luca + The Roman Guy for a delicious and informative evening!

Disclosure: I was a guest of The Roman Guy on this tour and my husband received a discount as my companion. As always, my opinions are entirely my own.

2 thoughts on “A Food Tour of Rome’s Trastevere Neighborhood”