With several days in Rome, it’s an easy choice to devote the better part of one day to seeing the famous ancient Roman sites and another day to Vatican City. But what do you do with the rest of your time? And where can you find good eats? (It all comes back to food for me, of course.) While I don’t profess to be any kind of expert about Rome after just one visit, I was happy with how we allocated our time and I feel like we were able to see a lot without things getting too hectic. Here’s a breakdown of how we spent four days in Rome…

We arrived in the city around noon on a train from Cinque Terre. After leaving our bags at our hotel near the main Termini train station, we walked to the Galleria Borghese. On our way, we stopped at Pinsere, a take-away pizza place offering slices with all kinds of creative toppings. You choose your unbaked slice and they cook it right in front of you. I had a slice with eggplant, raisins, pesto and nuts and although eggplant isn’t normally one of my favorite foods, it was delicious. The little shop was filled with locals and I highly recommend it for a quick lunch or snack. 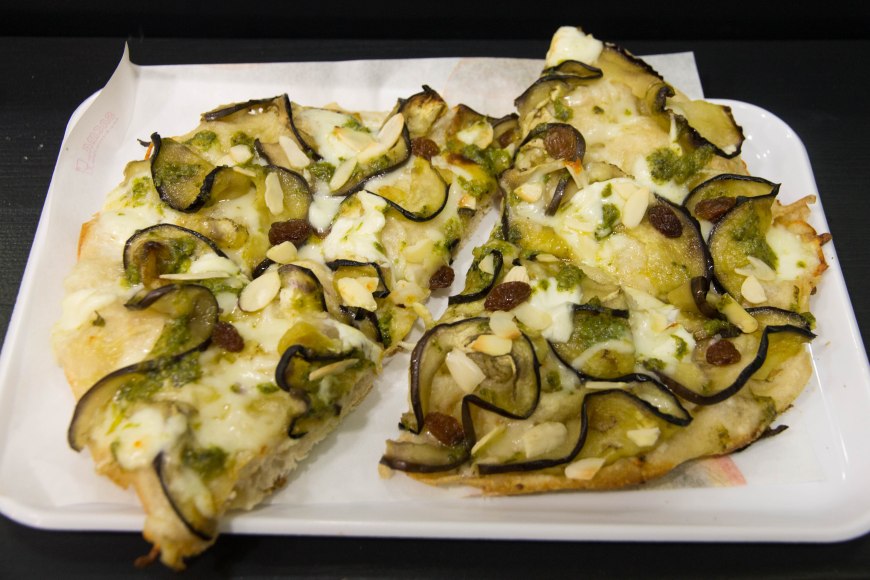 The Borghese museum was beautiful, but in hindsight we probably should have purchased a tour or at least an English audio guide. Labels were pretty much non-existent and what little there was was exclusively in Italian. So we were in awe, but kind of a confused awe :) It’s worth noting that if you want to visit this museum, getting tickets well in advance is a must. We saw lots of people getting turned away at the gate and being told the next open slot was in a week. 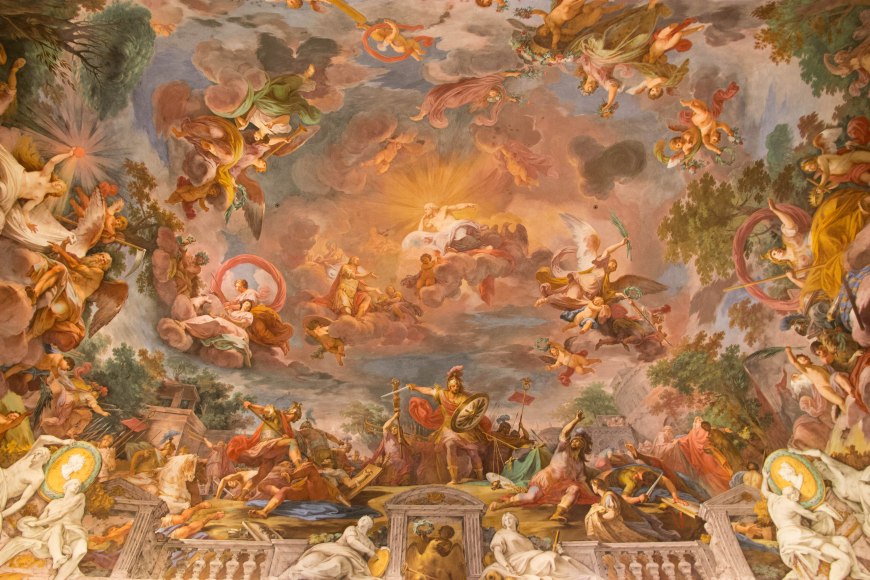 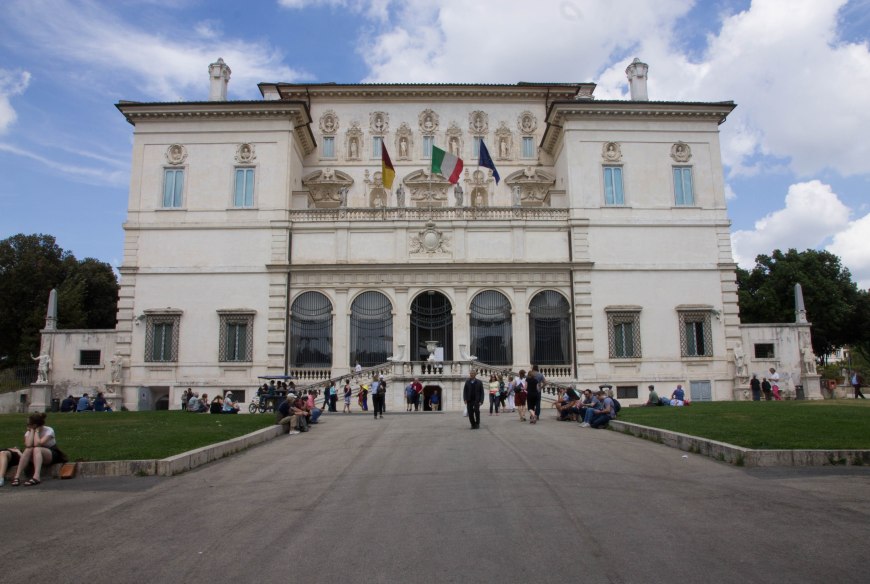 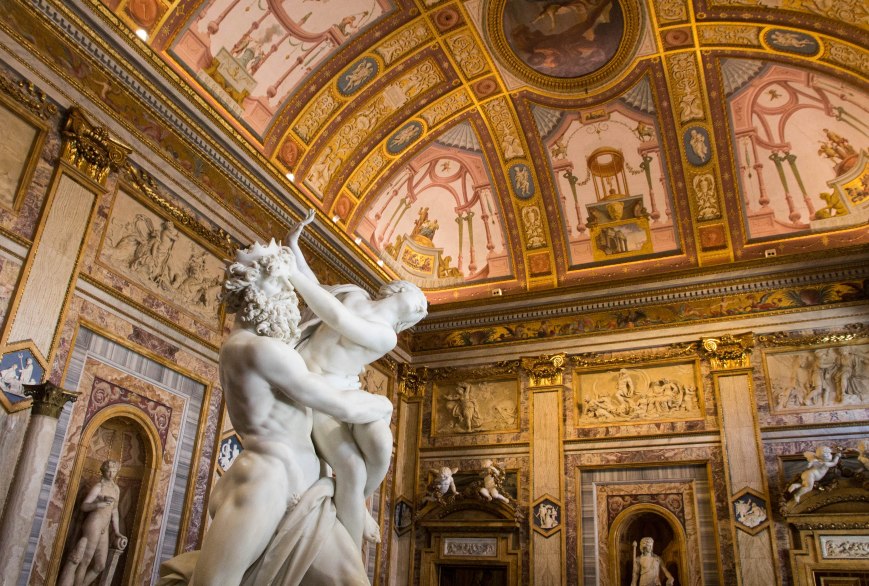 That evening, we did a food tour with The Roman Guy, which took us to the Trastevere neighborhood on the other side of the Tiber river from where we had so far been exploring. By the end of the tour we were so full of pizza, pasta, cheese, wine and gelato, that we definitely didn’t need any more food. 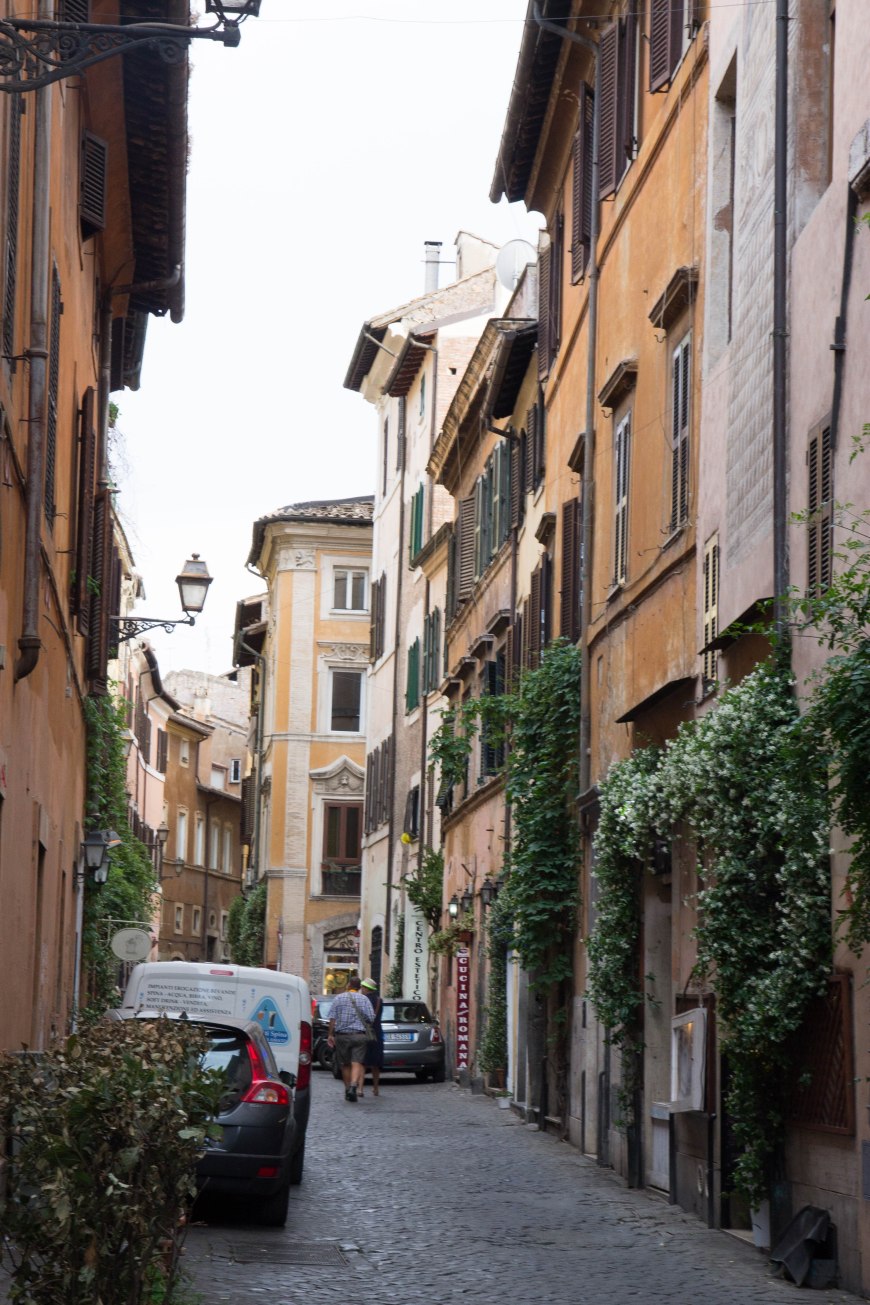 We began our day at the famous ancient Roman ruins – the Colosseum, Roman Forum and Palatine Hill. I definitely recommend starting your day here to beat both the crowds and the heat. We finished up there shortly after noon, and walked to the Pantheon, passing some other landmarks en route, including the towering Victor Emmanuel monument that overlooks Piazza Venezia. 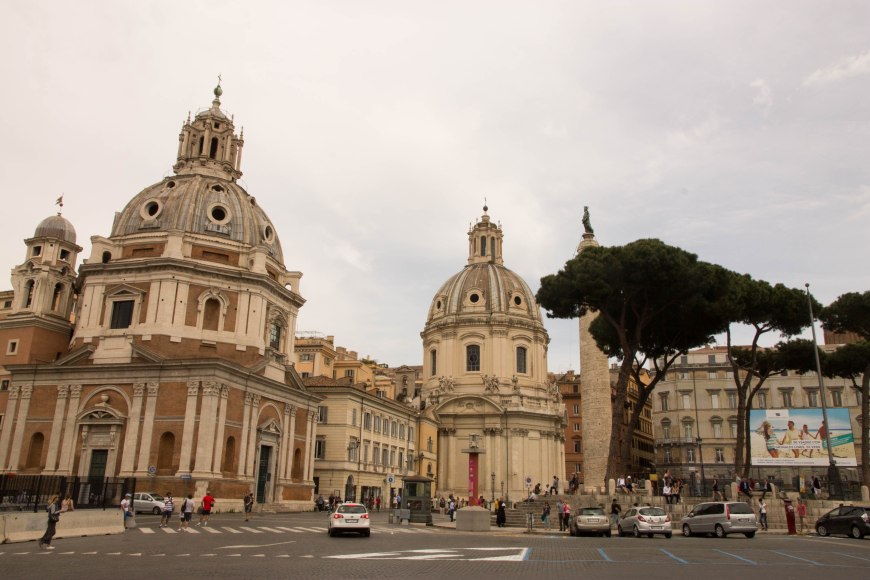 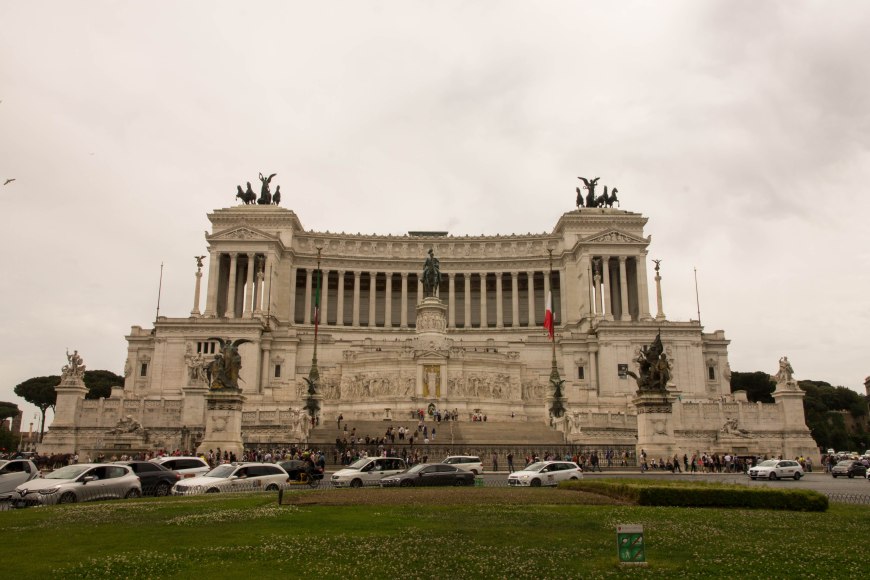 The Pantheon is an ancient Roman temple that held the record for the world’s largest dome from the time it was built in 128 AD until the 1400s, and is still the world’s largest unreinforced concrete dome. It is, like so many other things we saw in Rome, totally awe-inspiring. 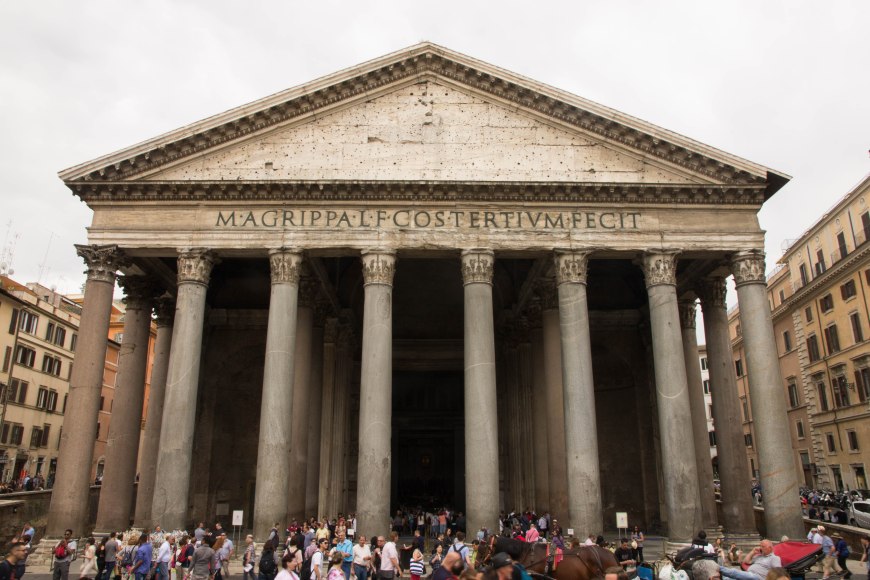 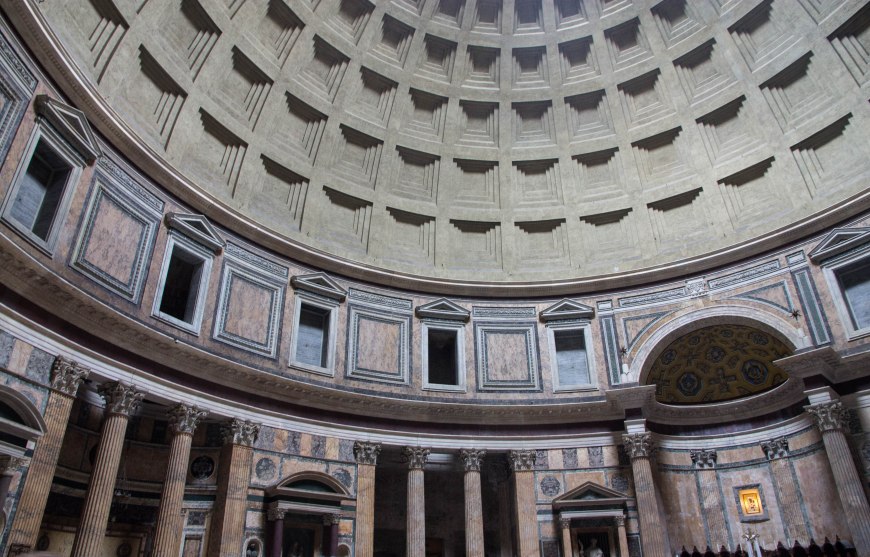 From the Pantheon, we walked a short distance to the Trevi Fountain and then on to the nearby Spanish Steps. Both spots were mobbed with people, but still beautiful. 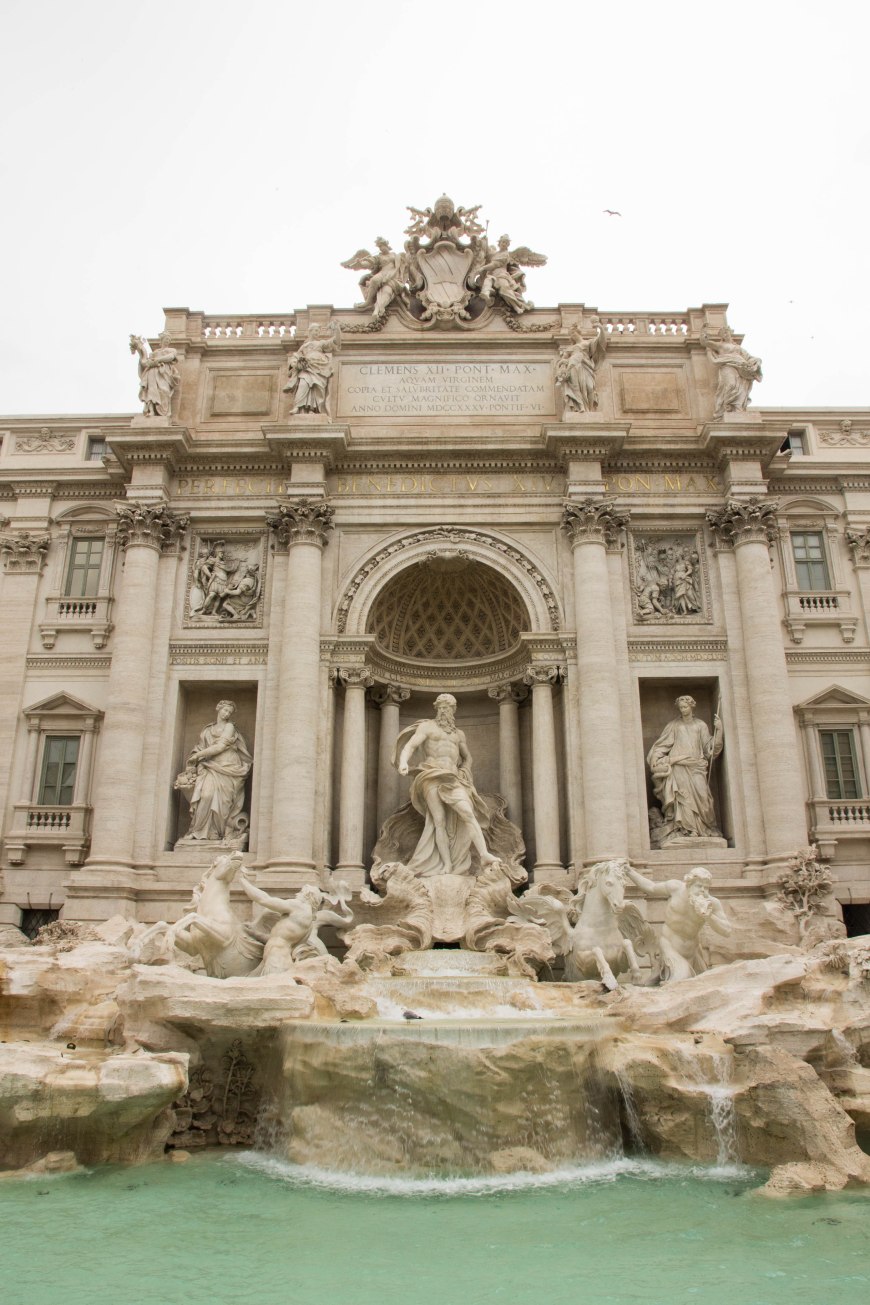 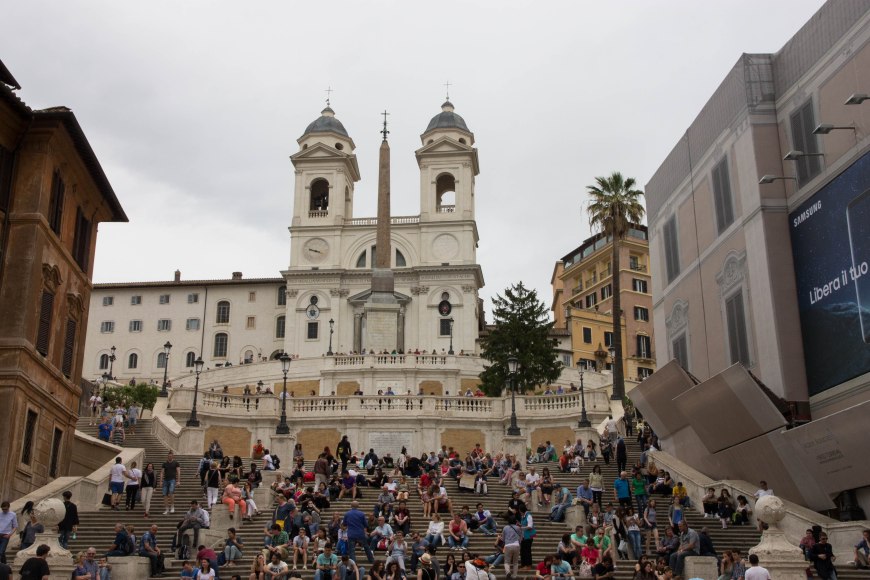 Since we did so much walking during the day, we didn’t venture far for dinner and ate at Osteria 44 right near our hotel. The food here was amazing, and it was probably my favorite of all the meals we had in Italy. I had cacio e pepe pasta (a Roman specialty) which was topped with deep-fried artichokes, another local delicacy. It was to die for, and my husband raved about his pasta carbonara too. 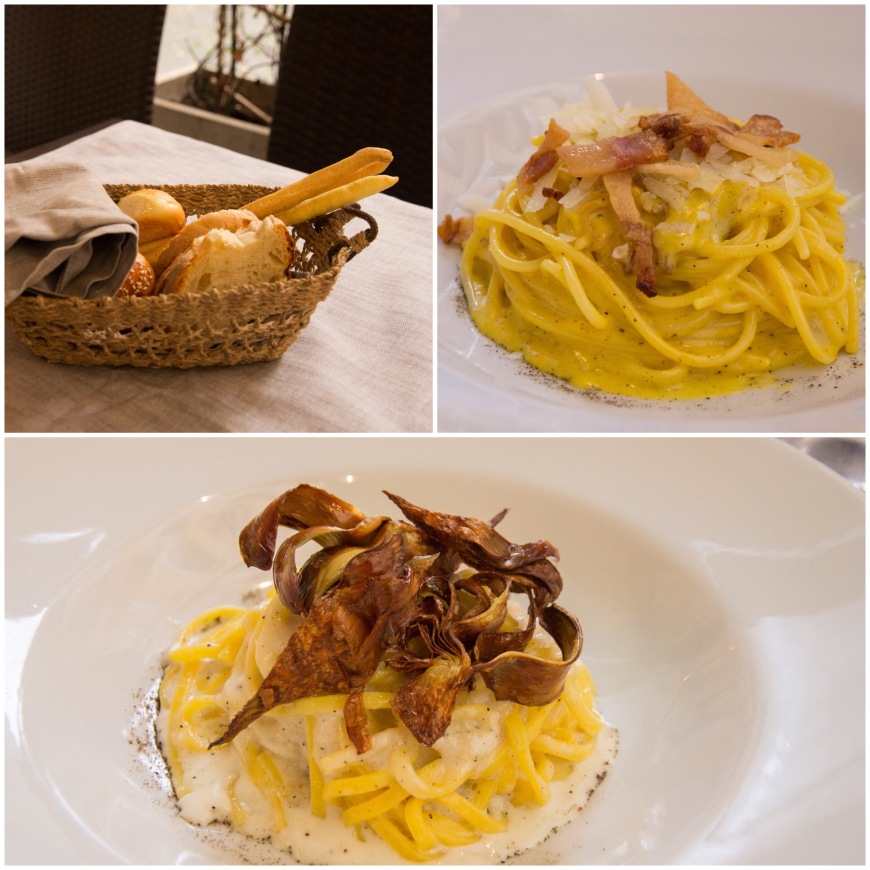 On the way home from dinner, we stumbled upon what would become our favorite spot for gelato: Gelateria La Romana. If you like, they pour melted chocolate into your cone before they scoop the gelato. It’s incredible, and their biscotto della nonna flavor (sweet cream gelato with chocolate covered shortbread) is unique and so delicious. 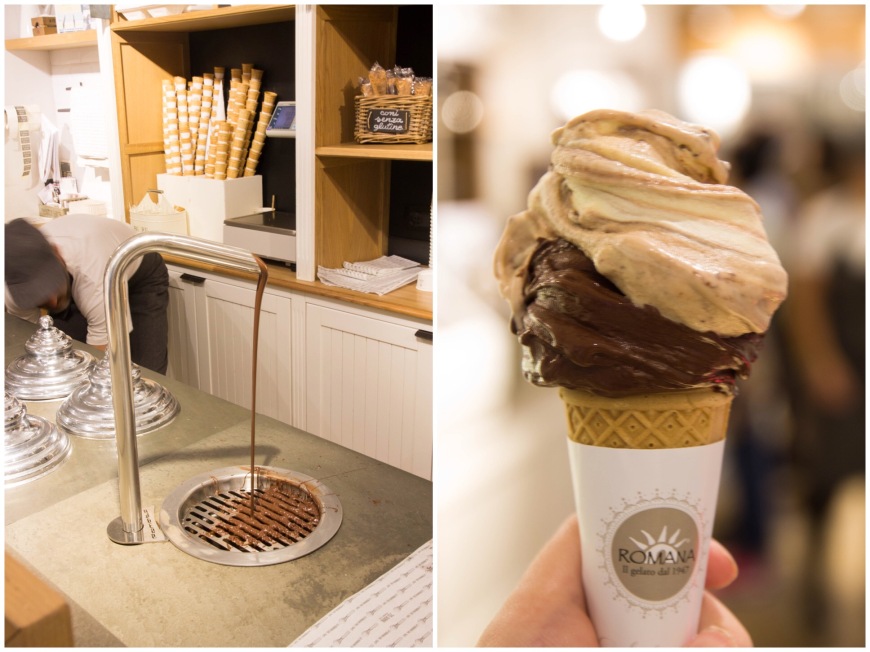 We were up very early for a beat-the-crowds tour of Vatican City with LivItaly. Thanks to the early start time and the compact nature of a guided tour, we had seen the Vatican Museums, the Sistine Chapel and the beautiful St. Peter’s Basilica all before noon. 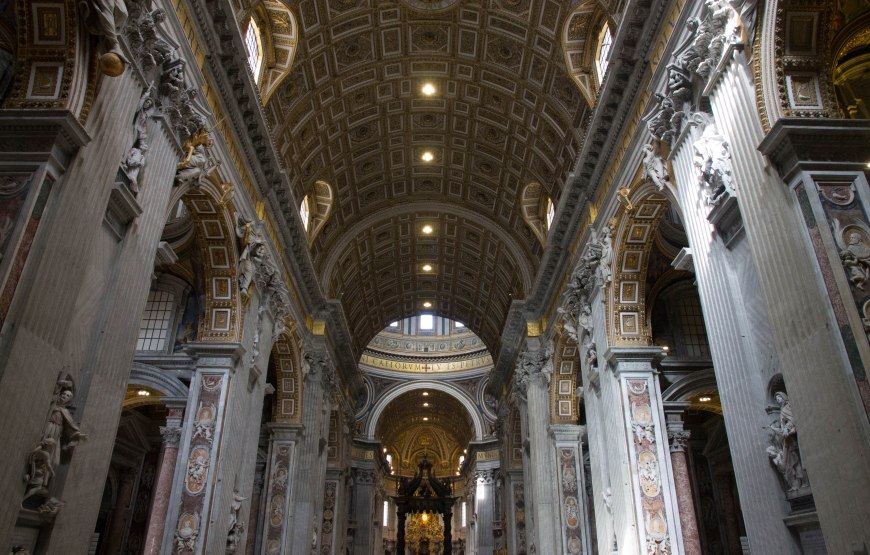 After leaving Vatican City, we explored the nearby area, including Castel Sant’Angelo, where the Emperor Hadrian is buried, for a little while before heading back to the hotel to rest up a bit before dinner. 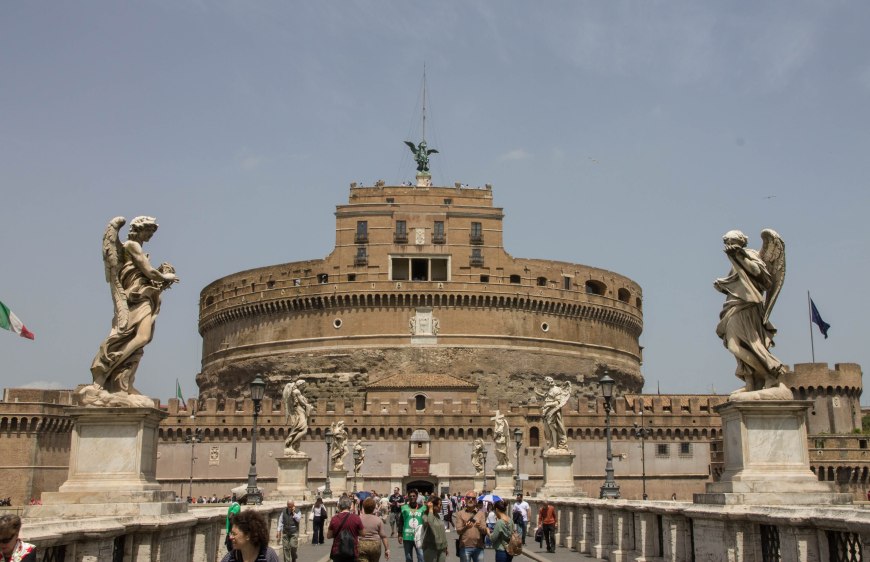 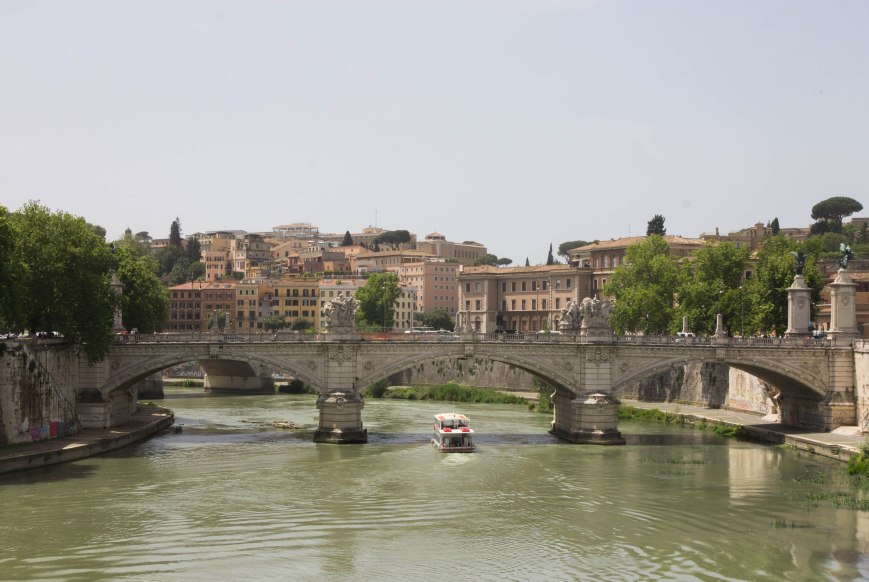 We had dinner that evening at Ristorante Sofia, a charming place right near the Spanish Steps. The food was a little less heavy and traditional than some of the other meals we had, but equally delicious. I loved my swordfish risotto and the focaccia squares were on point. 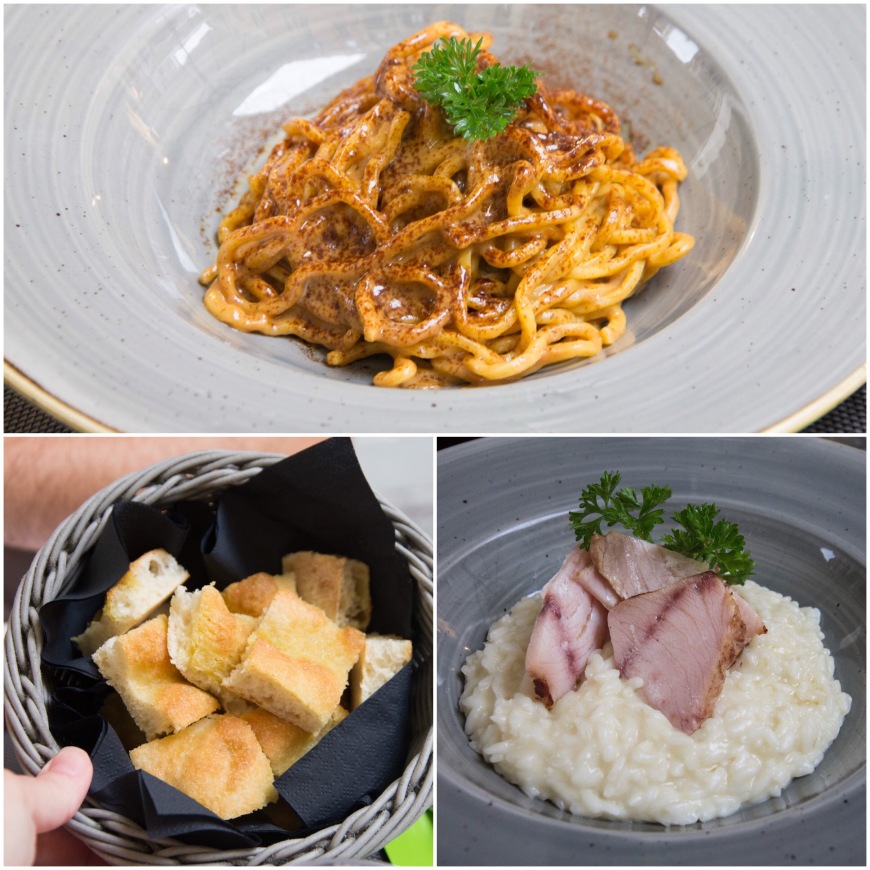 Normally when I’m traveling I don’t much after dinner, preferring to turn in early and rest up for the another long day of sightseeing, but Rome is such a photogenic city that I wanted to spend some time in the evening walking around and snapping photos. I headed over to Ponte Umberto I, a bridge with a great view of St. Peter’s Basilica. Other than the Colosseum, St. Peter’s was my favorite building in Rome, so I’m glad I got to revisit it at night. 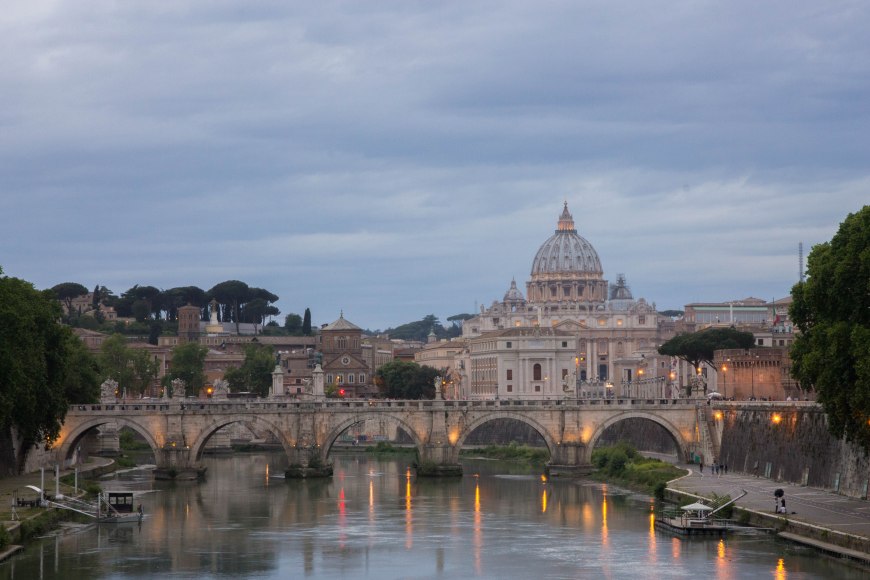 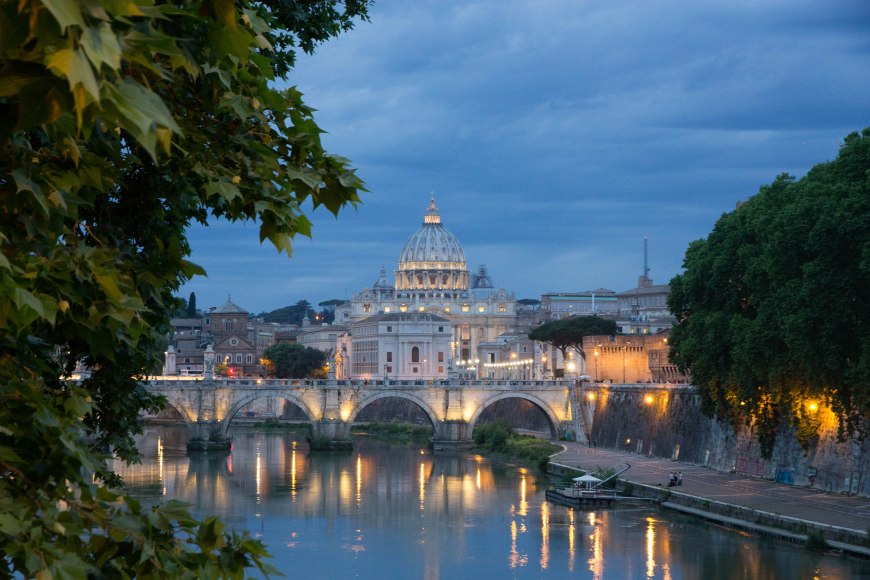 It was such a beautiful night that after I took my photos of St. Peter’s, I walked around a bit more, photographing this impressive-looking building (that I later found out is the Italian Supreme Court) and eventually walking over to Piazza Navona, one of Rome’s major gathering places, which was bustling with people and sidewalk cafes. 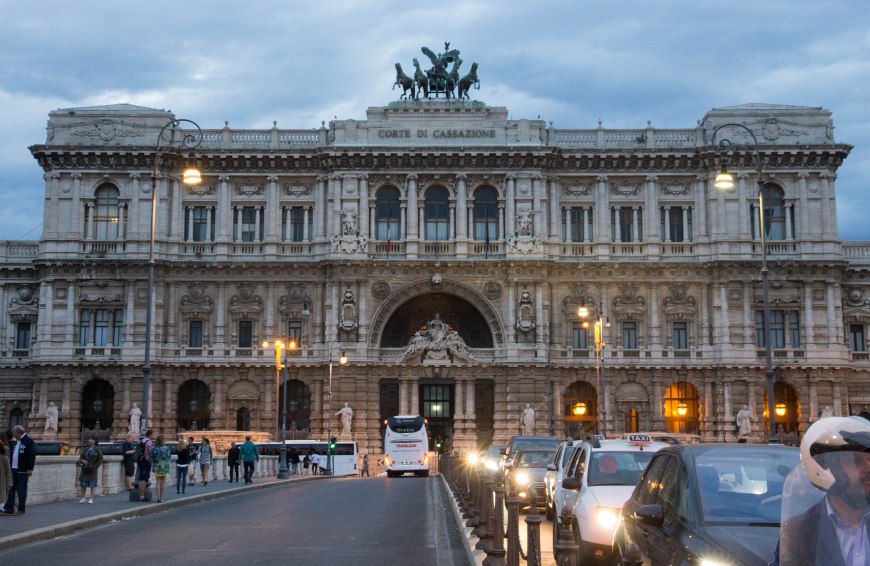 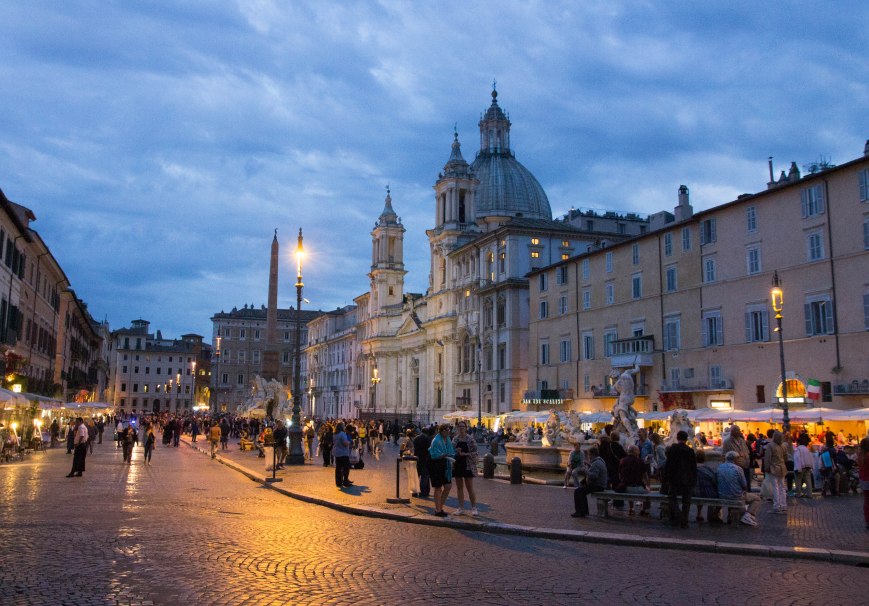 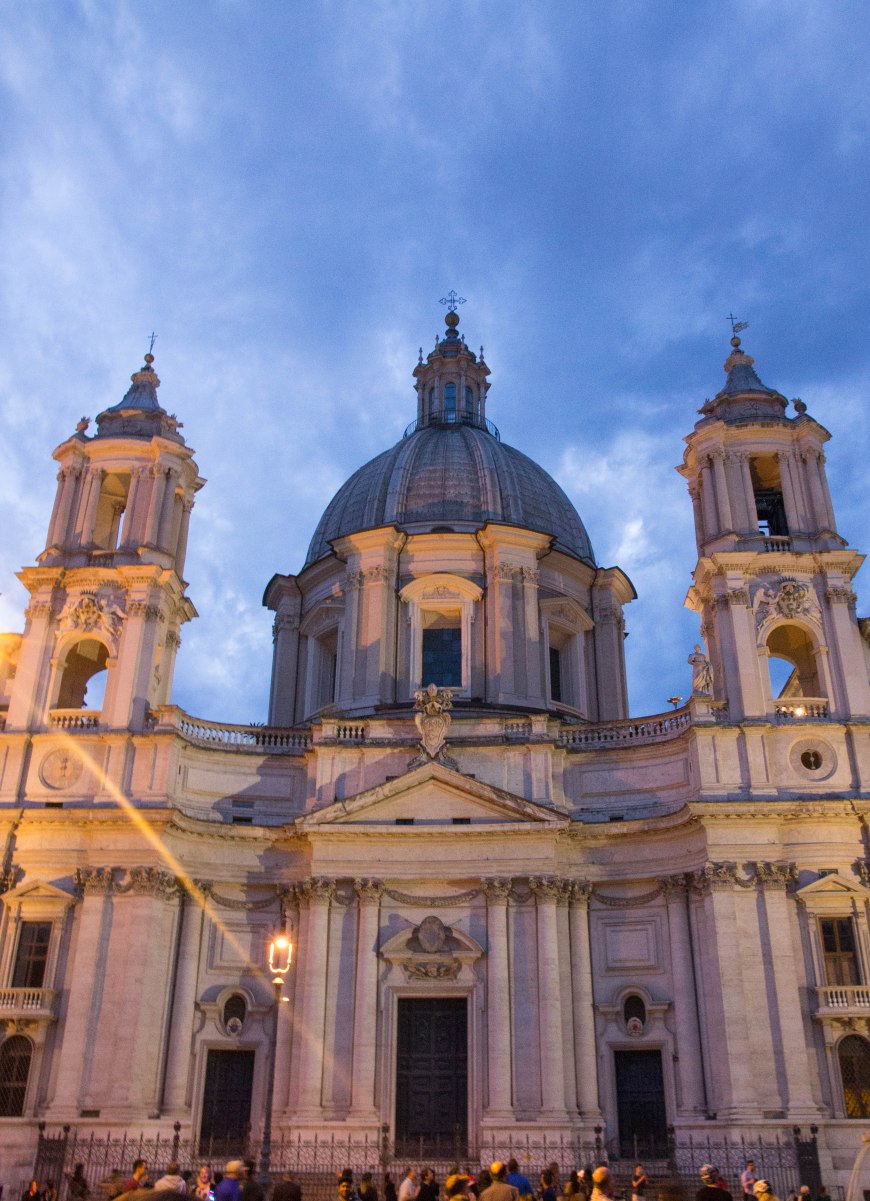 A lot of guidebooks will tell you that with four days in Rome, you should take a day trip out of the city on your last day. I definitely understand the instinct to want to cover as much ground as possible, but I’m so glad we decided to stick around the city the whole time. Having checked off all the major “must-sees” in our first three days, it was so nice having another day to just leisurely stroll around and soak up the city. I’m not normally much of a big city person, but I really fell in love with Rome and didn’t want to miss a moment here.

We started our last day by revisiting the Pantheon area, doing some shopping (I got a beautiful watercolor triptych of three of my favorite Roman scenes), eating more excellent gelato (this time at Giolitti) and visiting Hadrian’s Temple. (As a kid I was always a little sad that my name wasn’t one of the options for the little personalized trinkets sold at gas stations, so it was fun to see it – or at least the Latin and Italian versions of it – all over the place.) 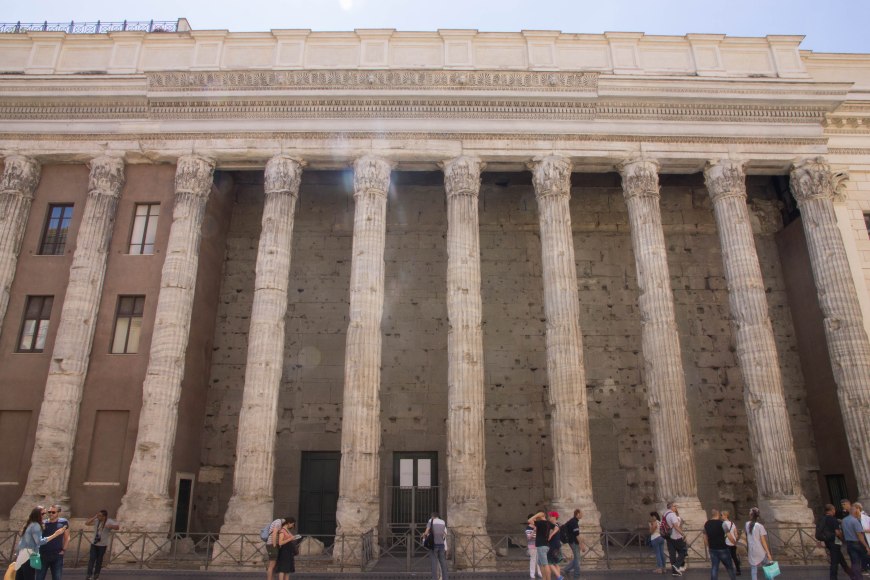 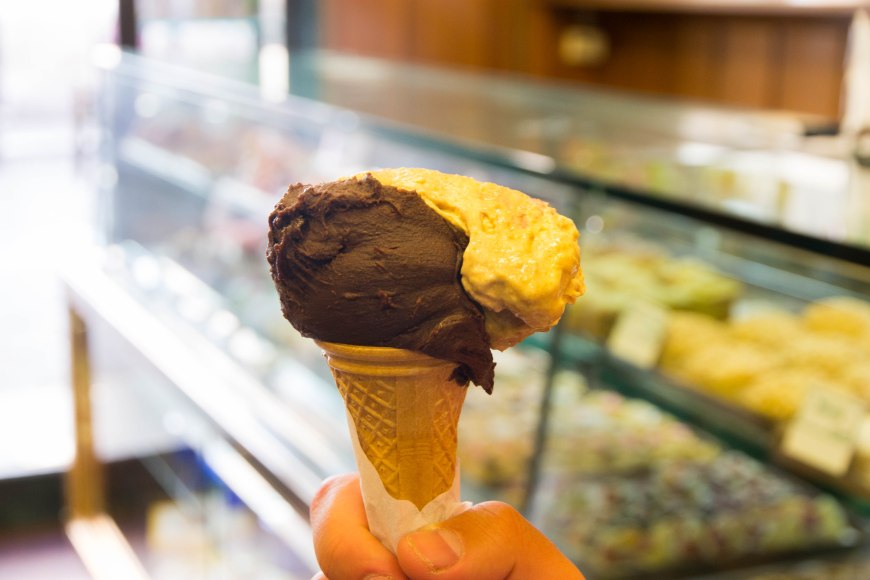 Then we walked back to Piazza Navona, which felt very different in the day time, but was equally as busy, with lots of musicians and art vendors. 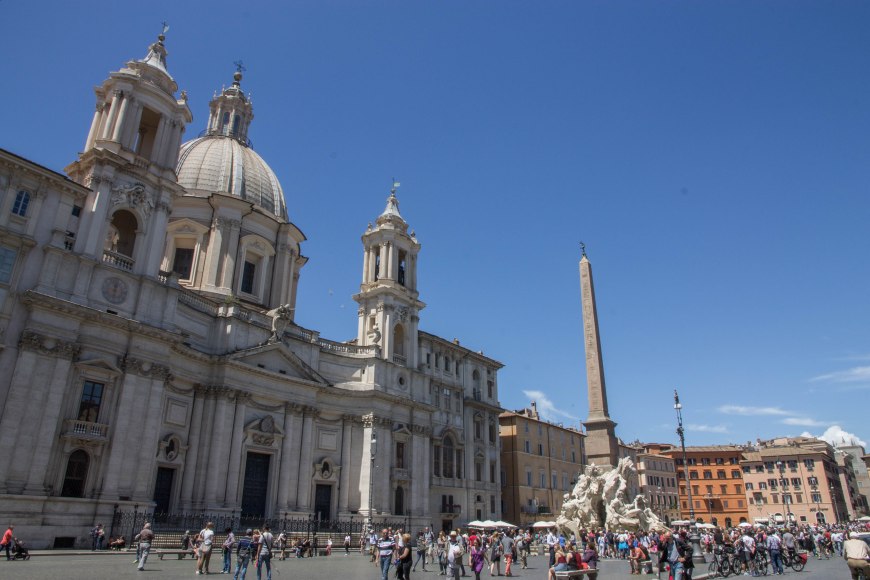 We then took a stroll along the Tiber river, and over the bridge to Tiber Island. For such a large city, Rome has so much greenery – I think that’s part of why I loved it so much. 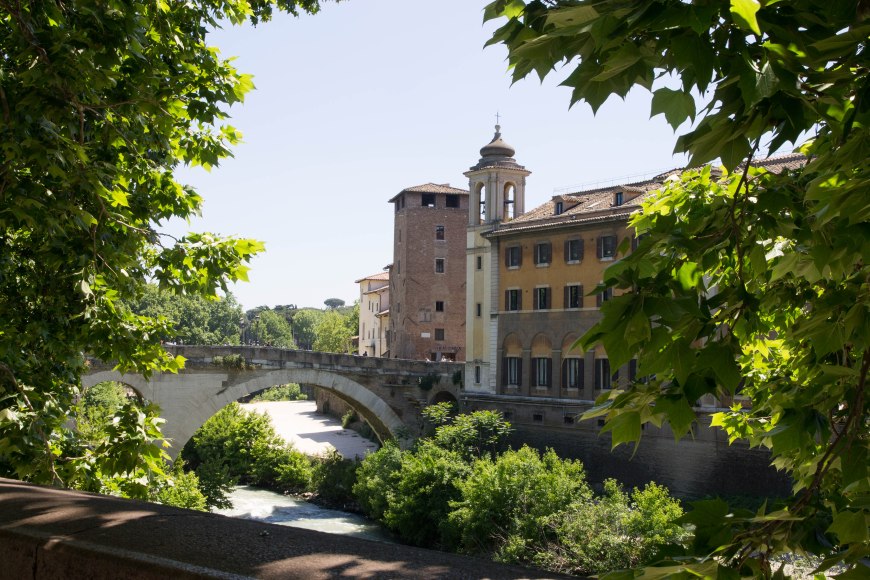 After that we took a walk through the Jewish quarter in search of more fried artichokes. The artichokes were kind of a bust (we found some but they were nowhere near as good as the ones at Osteria 44), but it is a charming neighborhood with some more ancient ruins. 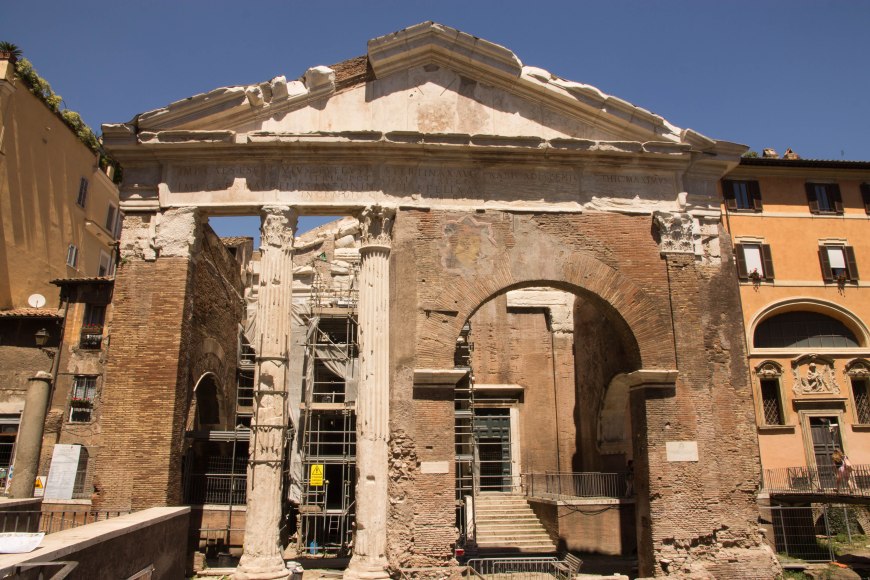 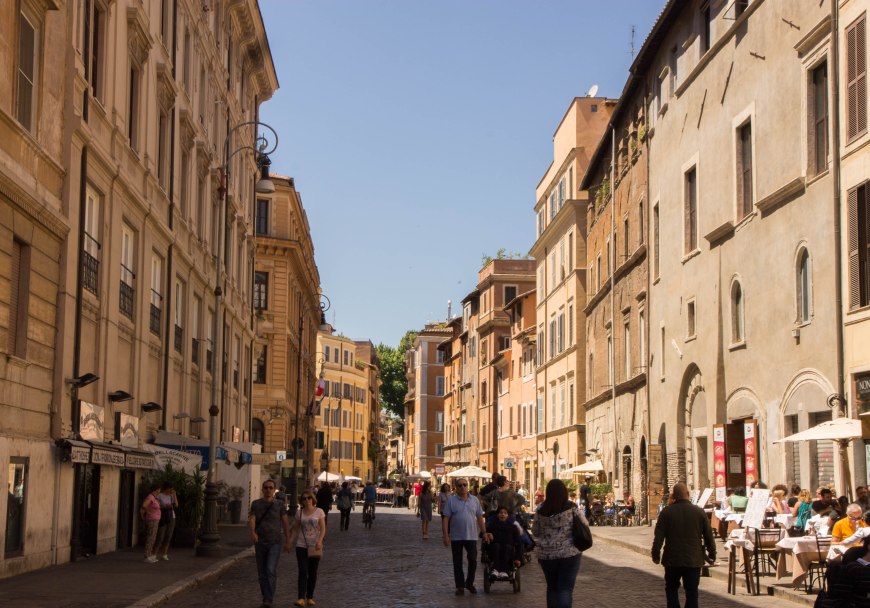 For dinner that night, we headed back to Trastevere, which we’d briefly explored on our food tour, to a restaurant called La Botticella. For some reason, the other patrons were all fellow Americans (I’m really not sure why – it was very highly rated on Yelp & TripAdvisor, but so were all the other places we ate at) which was a bit of a disappointment for our “last supper.” But the food was very solid, and I especially enjoyed the zucchini flowers stuffed with mozzarella and anchovies that we ordered as an appetizer. 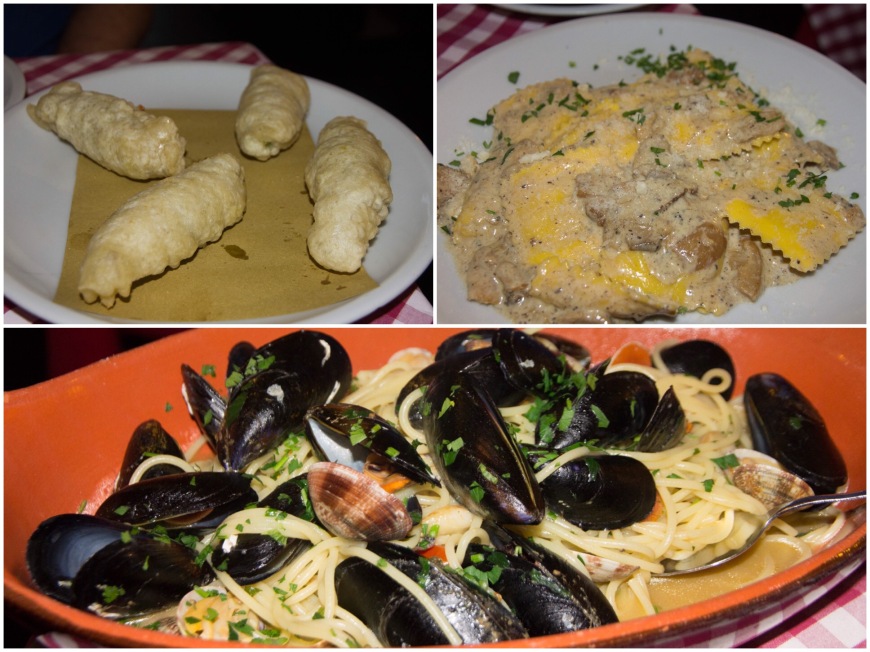 We wrapped up our final day in Rome – and in Italy – going back to the Colosseum to see it at night and take some pictures. As I said before, I recommend everyone do this to see the Colosseum without the crowds, and it was the perfect way to bid farewell to Rome. Ciao (for now), Italia! 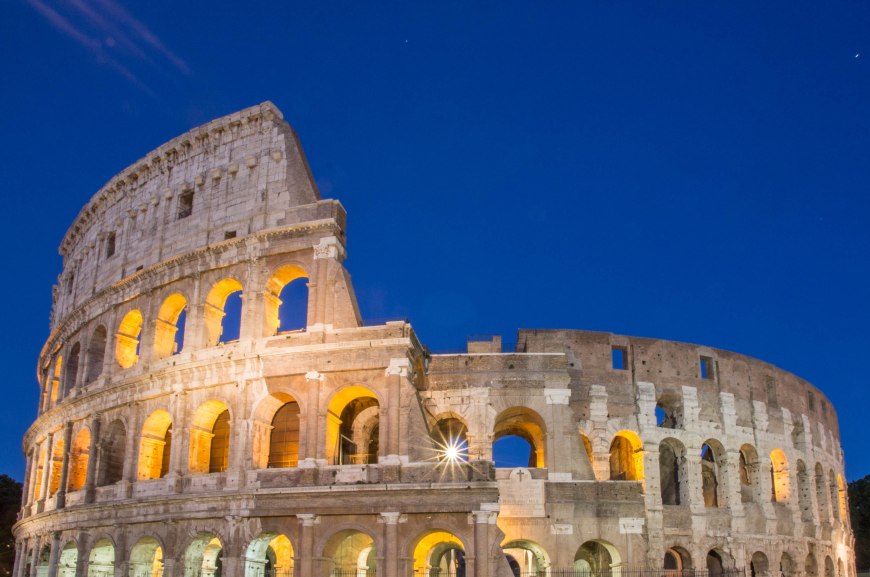 Disclosure: I was a guest of The Roman Guy and LivItaly on the tours. I paid my own way for everything else. As always, my opinions are entirely my own.

Leave a Reply to Spouses with Suitcases Cancel reply