Cuba is less than 100 miles off the southern coast of Florida, but I felt more culture shock there than just about anywhere else I’ve been. It wasn’t just that visiting Havana is a lot like being transported in time, with its many 1950s-era cars and the giant advertisement for Lucky Strikes that greets you at the airport. Or the difficulties of travel in a developing country, although Cuba does present some rather unique challenges on that front – feminine hygiene products are almost impossible to obtain and many public restrooms lack toilets seats and paper. It wasn’t even meeting so many people who spoke glowingly about Fidel Castro, although that was jarring, coming from a country where even most of those who disapprove of the embargo still don’t exactly admire the guy.

Rather, I think the most disorienting thing about my visit was how the image of Cuba that was presented to me seemed so filtered and censored. Habana Vieja (Old Havana) is filled with what looks like beautiful architecture, much of it recently restored and freshly painted. But that’s just the facades of the buildings. If you walk around to the back, you’ll find crumbling walls, chipped paint and piles of trash. Many of the buildings don’t even appear to be in use, although if you try to get a glimpse of what’s inside, doors get slammed in your face quickly. While gushing over the restoration of the area, our guide mentioned in passing that the people who used to live there had been relocated. “What happened to them?” I asked. “Don’t worry,” she replied. “They’re still alive.” I suppose it’s good to know they weren’t murdered to make a pretty plaza for tourists, but it wasn’t an answer to my question. It wasn’t the only time I felt like I got the run-around.

One day we heard a talk by a local political science professor and writer (incidentally one of the most interesting parts of the trip for me – our itinerary was otherwise packed with music performances and visits to visual artists, and while I enjoy those things, they got repetitive quickly for this left-brained bookworm). He lectured us about how Americans are misled by the Cuban-American lobby, and assured they really do have academic freedom and freedom of the press in Cuba, and that citizens are free to criticize the government without repercussion. Yet he also spoke enthusiastically about the government and all the great things it has done for Cuban citizens, so it’s a bit of an understatement to say he didn’t exactly prove his point.

It’s hard to know how much of this is because I took an organized group tour (a “people-to-people” educational exchange, which is the only way for most Americans to legally travel to Cuba). Probably some of it can be chalked up to that. But my extensive pre-departure reading (a post about everything I read to prepare is coming up soon) suggests that it’s pretty difficult for tourists to see the “real” Cuba. Ordinary citizens are separated from the tourist industry in a way they aren’t in most other countries, a phenomenon known as “tourist apartheid.” Tourists have a separate currency, shop in separate grocery stores and go to separate hospitals when they get sick. I’ve read that until a few years ago, it was actually illegal for Cubans to be in a hotel, lest they catch a glimpse of CNN or get access to the wifi (although I have to say, I can’t imagine there’s much chance of that – I managed to download email only once the entire time I was there). Things are opening up a bit in this regard, but it’s still harder for tourists to meet regular citizens than it is most places, and Cubans are reportedly reluctant to speak frankly about politics and what life is really like.

I’ve been to poorer countries, and certainly to places where the poorest segment of the population is worse off than they are in Cuba. In fact, there’s a decent argument that the poorest Cubans are better off than those living in poverty in the United States  – at least all Cubans have government-provided healthcare, a fact that they remind you about constantly, as if they are the only country in the world with universal healthcare. But I’ve never been to a place that tries so hard to convince tourists it’s something it’s not, and that really bothered me. I felt manipulated, and that made me very frustrated at times.

Despite my complicated feelings about my trip, there’s no denying that Havana and its people are very photogenic and many of our activities taught me a lot about Cuban history and culture. Just like it would be misleading to share the beautiful scenes I saw without the context, it would also be unfair to share my misgivings about my trip without including any of the highlights. Below are some of the photos I took that best represent my three days there. 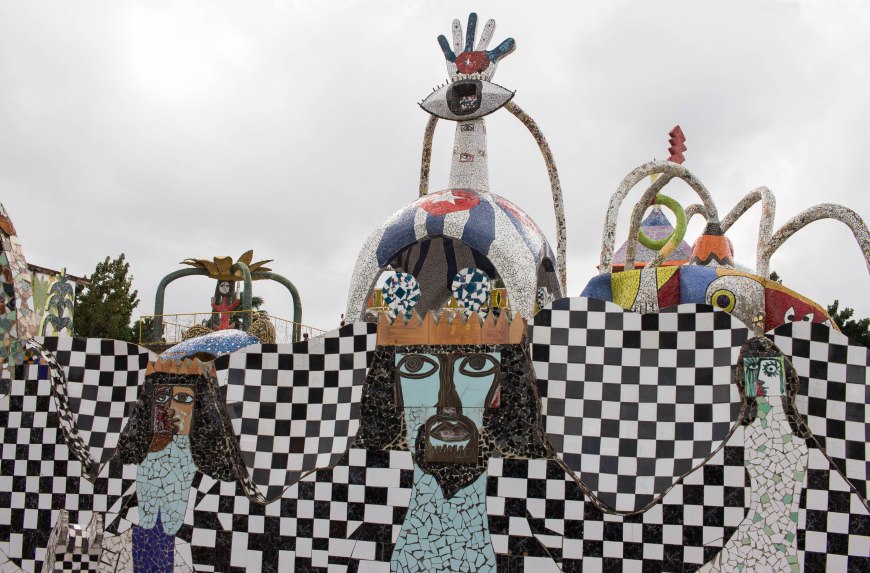 We went directly from the airport to a neighborhood of Havana called Jaimanitas, which has been decorated by the artist José Fuster in mosaic tile. We toured Fuster’s home studio, which has many sculptures like these. 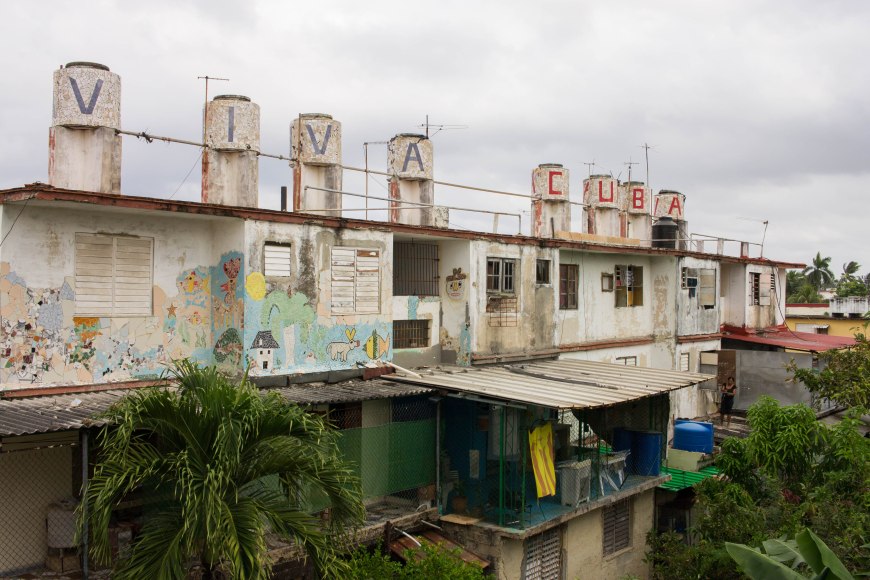 The artwork was beautiful, but one of the most interesting things to me about touring Fuster’s home was getting a view of some of the surrounding homes in the neighborhood (complete with obligatory patriotic message – in tile, of course). 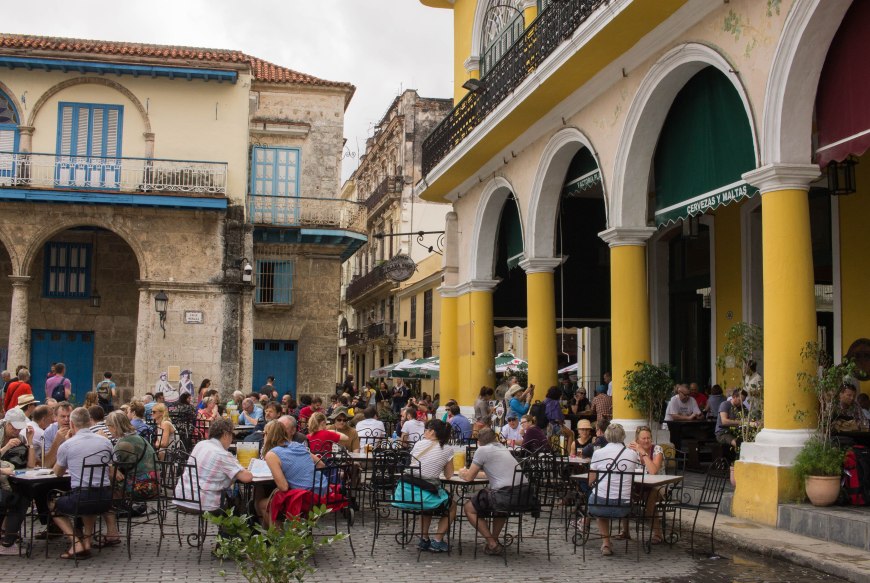 Although most of the time I was very aware that I was not in the US or Europe, this scene on Plaza Vieja in Old Havana, with outdoor dining and live music, could easily be mistaken for Spain or Italy. 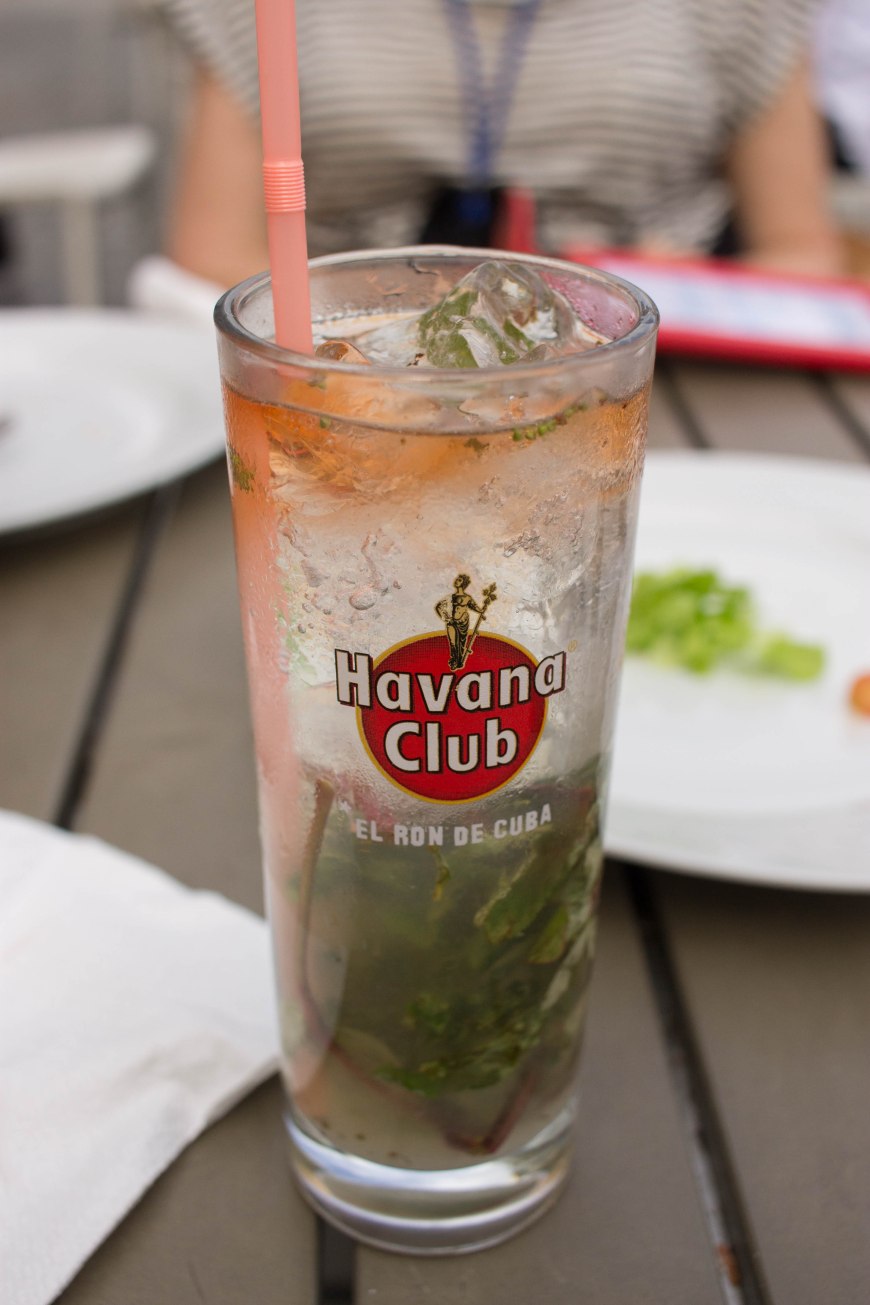 I’m not much of a drinker, but when in Cuba… 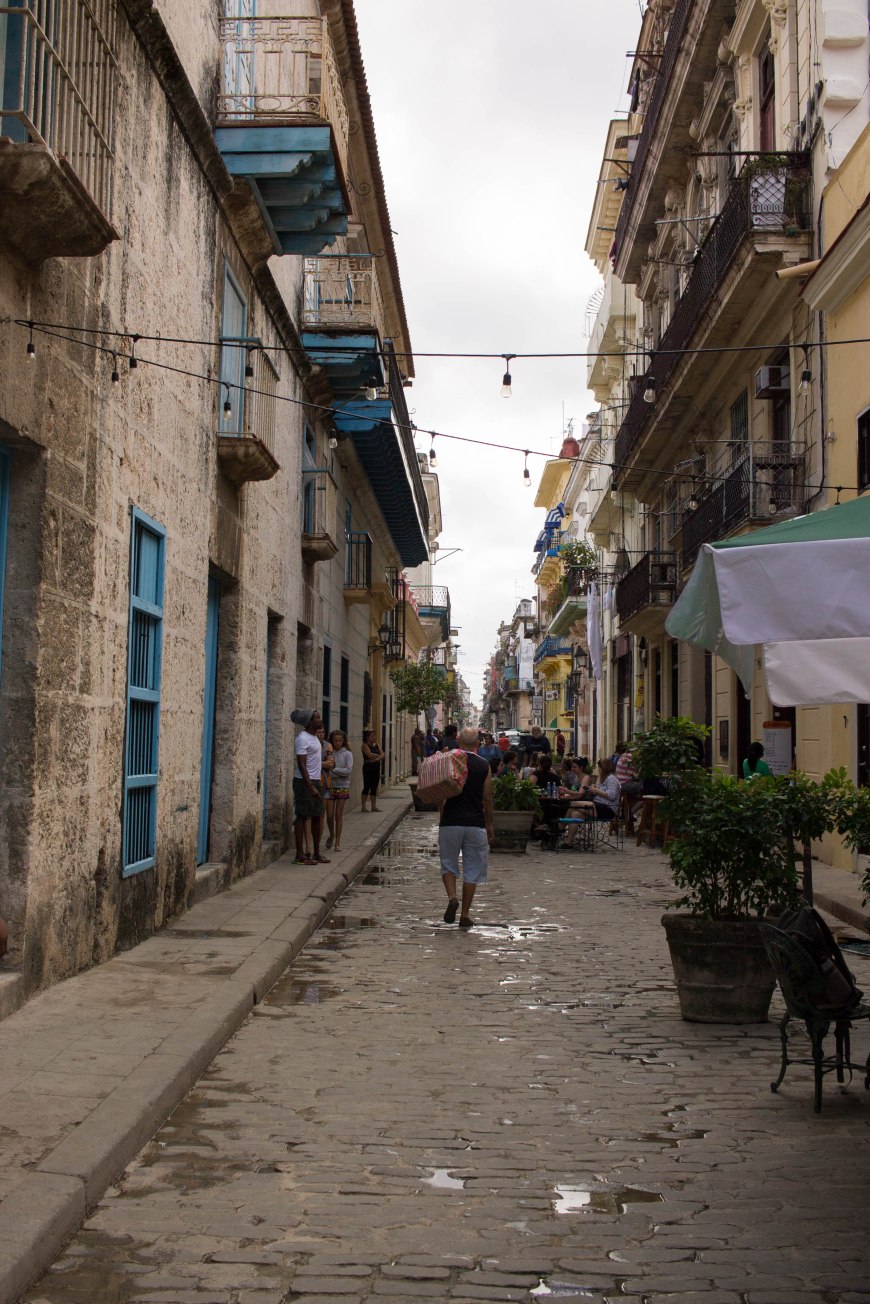 The main plazas of Old Havana were unbelievably crowded (it probably didn’t help that I visited over the New Years holiday), but I loved peeking down some of the side streets for a glimpse of the (slightly) less touristy side of the old city. 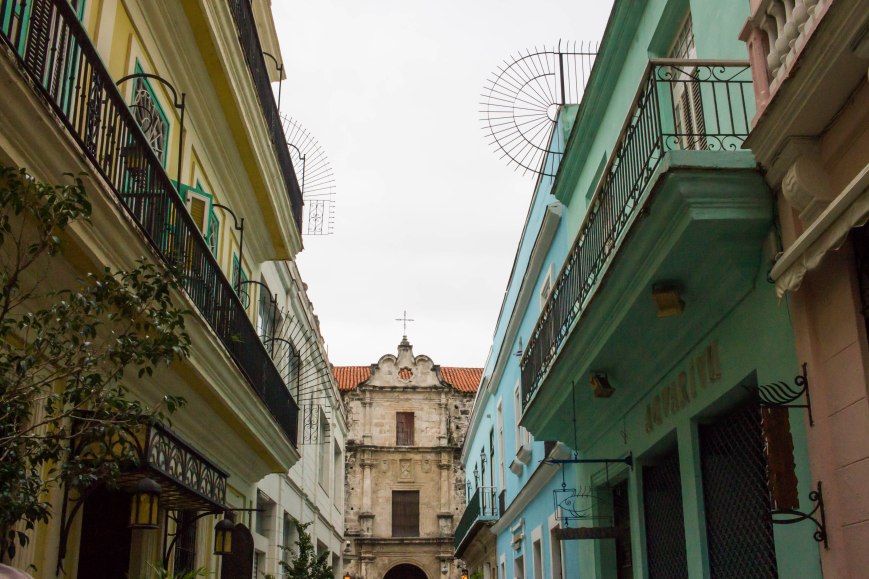 So many buildings in Old Havana have beautiful wrought iron balconies like these. 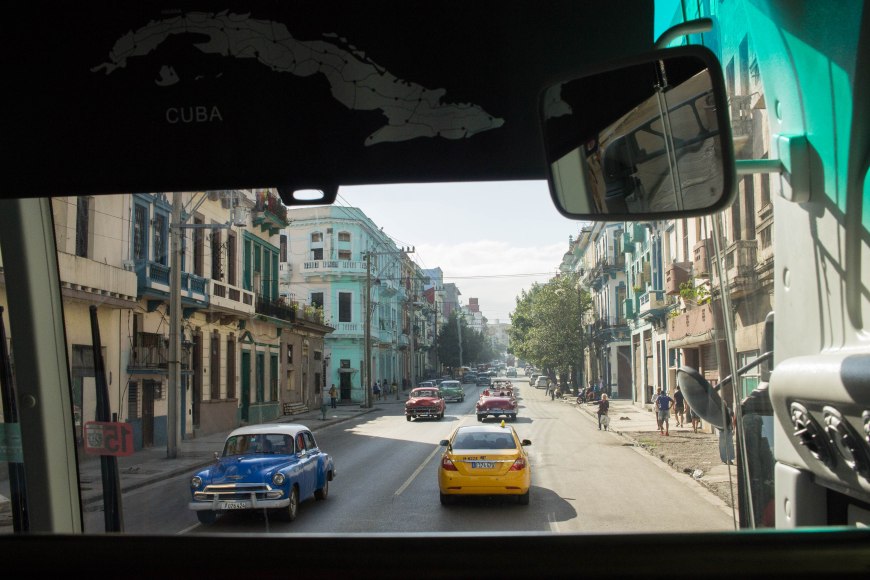 This isn’t my favorite image from a photography perspective, but it wouldn’t really be an accurate representation of our trip if I didn’t include a photo taken from the bus, since I saw a lot of Havana go by that way – an unfortunate reality of group tours.

Cuban flags and flag artwork are everywhere in Havana. This painting is on Callejón de Hamel, a street that is famous for being a living museum of Afro-Cuban culture, with art and music.

An Afro-Cuban dance performance on Callejon de Hamel, featuring women dressed as different orishas (deities) of Santeria. Photos obviously can’t capture this fully but I love the expression on her face in this one.

A stately home (or former home – many of the largest houses in Havana are now foreign embassies or government buildings) spotted on a late afternoon stroll through the Vedado neighborhood, where our hotel was. 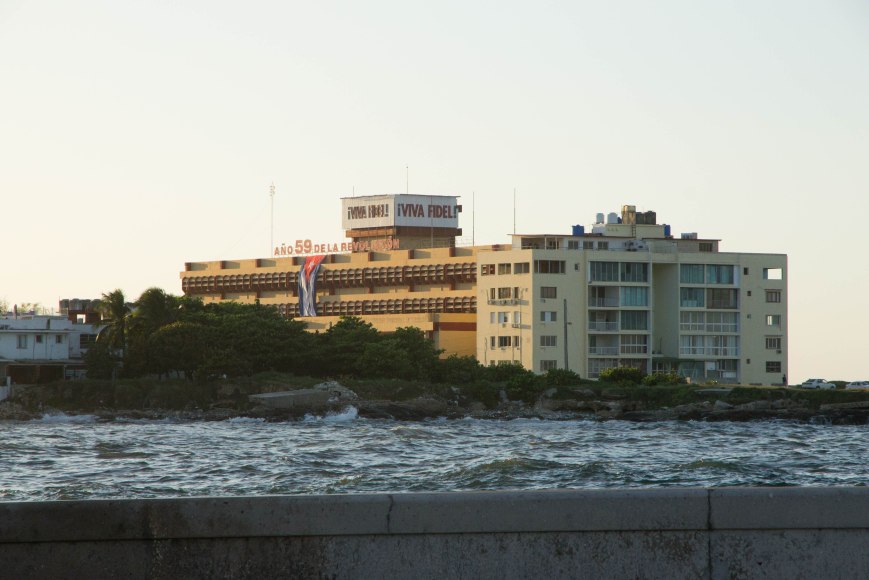 Fidel apparently wasn’t a huge fan of monuments to himself, so there isn’t much in the way of official recognition for him. José Marti and Che are the formal faces of the revolution in Havana, although that doesn’t stop people from proclaiming their loyalty to Fidel.

Sunset along the Malecón, Havana’s five-mile-long seaside boulevard that runs from Old Havana to the Vedado neighborhood. It’s one of the best spots in Havana for people-watching, as old men come there to fish and young people to meet up with their friends and significant others.

We began our second day at the Plaza de la Revolución, where there are giant monuments to Che and José Marti and where many official speeches and celebrations take place. Every year a giant parade is held around New Years to celebrate the anniversary of the revolution and they were gearing up for it when we visited. The text below Che says “hasta la victoria siempre” – until victory always. 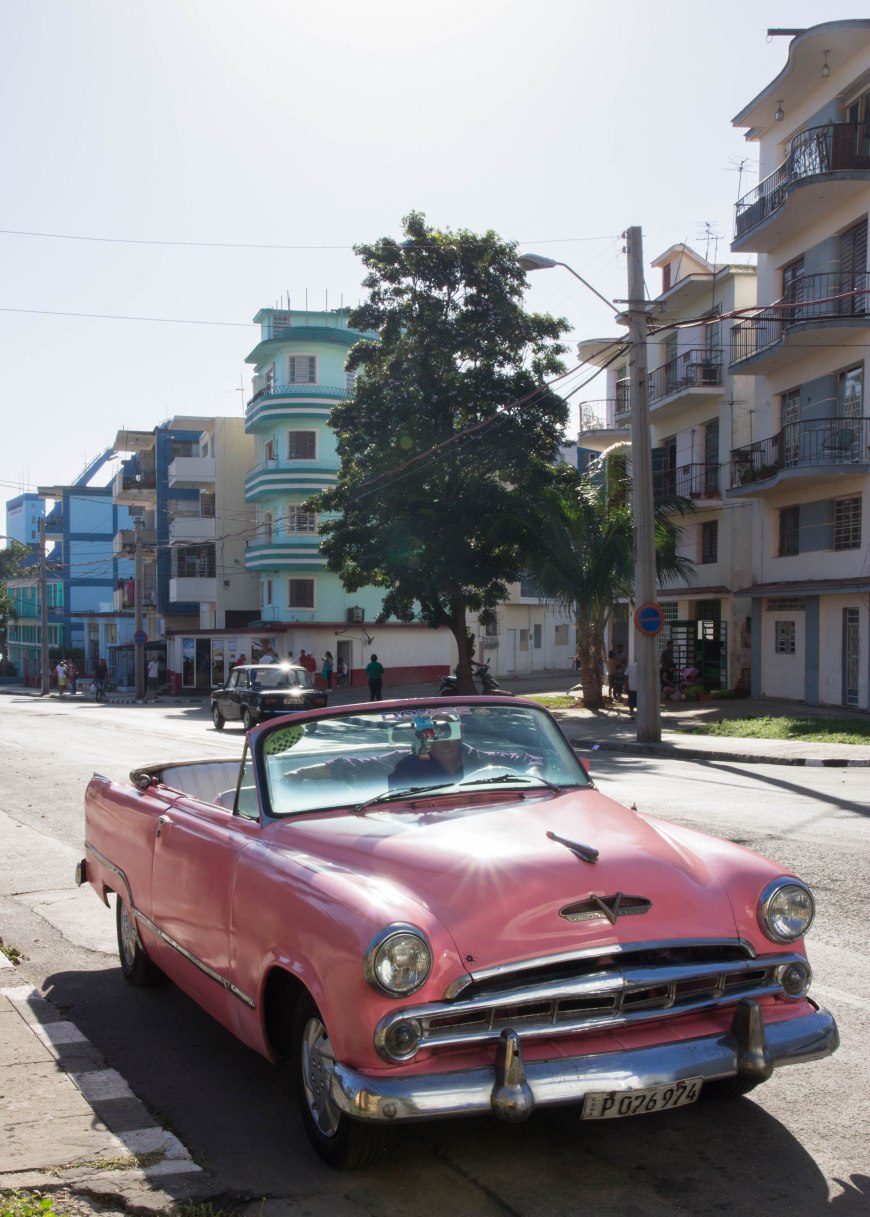 Our next stop was a cigar store and since I had no interest in purchasing anything, I occupied myself taking pictures of classic cars, a very easy way to kill time in Havana.

Then it was back to Old Havana, to see a couple of areas we hadn’t visited before.

Flags hang off the balconies in so many homes in Havana. I also love that the windows are open and you can see the laundry drying inside.

A pop of bright blue in Old Havana. 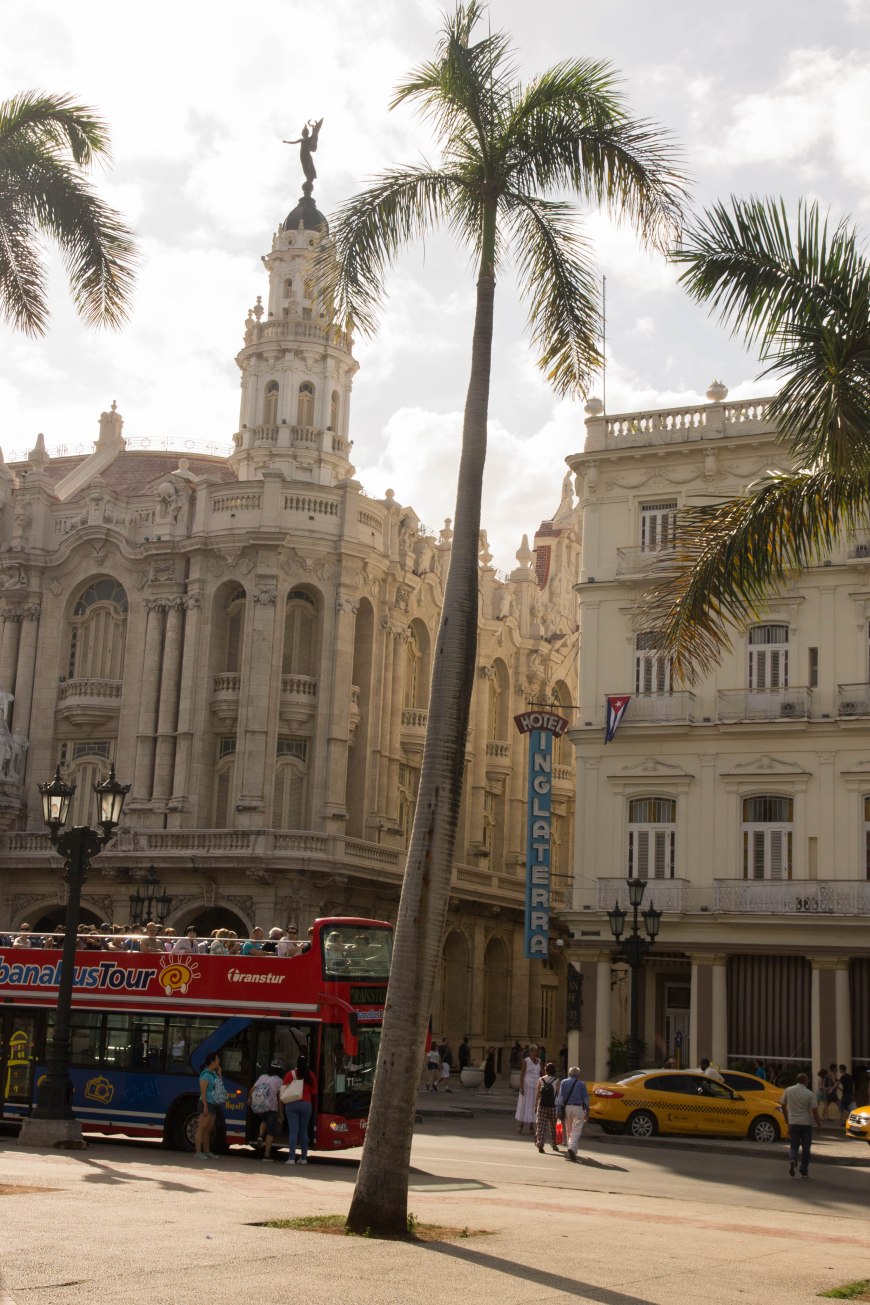 Starbucks and McDonald’s may not have reached Havana but the hop-on/hop-off bus has ;)

My favorite building in Havana, the Gran Teatro (which was also in the background of the previous photo). Beyond the theater is the former (pre-1959) capitol building, which is a near replica of the United States Capitol, but just a few feet higher. Since the revolution it’s been used as a museum, but apparently when the restoration is complete, the Cuban parliament is going to move into it. 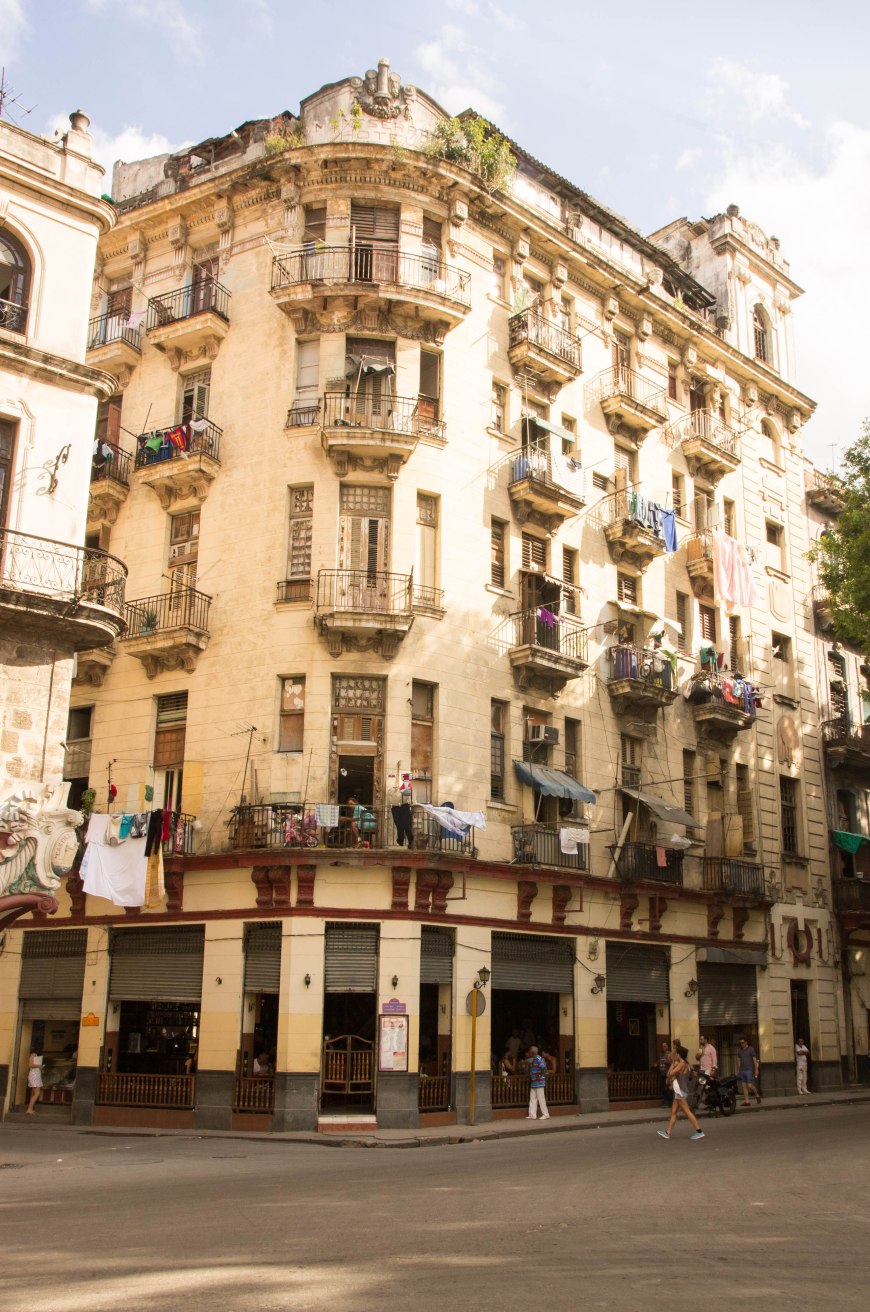 One of the strongest mental images I have from Cuba is laundry hanging out to dry off balconies, as exemplified by this building in central Havana.

The Paseo del Prado, a long boulevard that runs through Central Havana all the way to the Malecón. It has a large pedestrian pathway in the center and beautiful pastel-colored buildings.

It’s about five miles along the Malecón from Old Havana to the Vedado area – a long walk, but a great way to get a feel for Havana.

In the side streets off the Malecón, there’s a lot less effort made to hide how dilapidated the buildings are than there is in the touristy parts of town. Many of them still have brightly painted facades though.

Another street off the Malecón that is quieter and more residential.

A flag stands guard over a statue of Calixto García, a leader in the Cuba war for independence, at sunset along the Malecón. 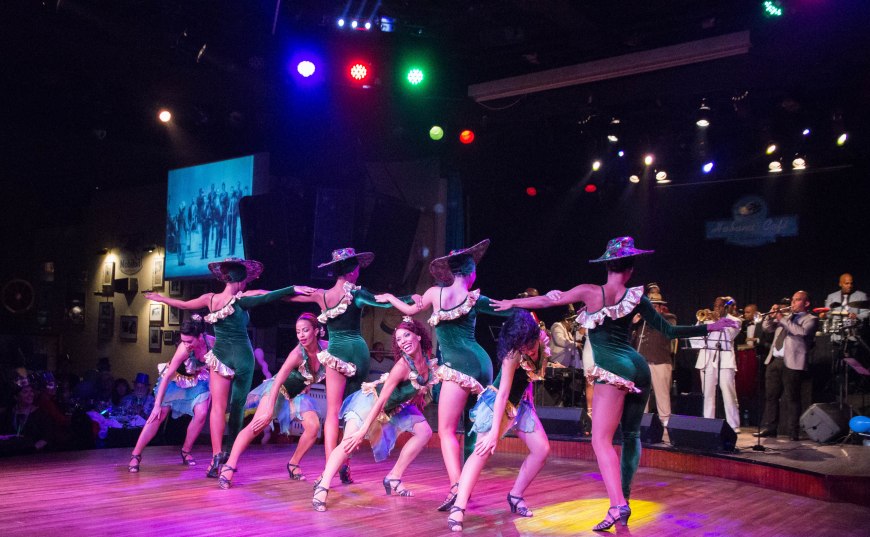 A New Years Eve show at the Havana Cafe, a nightclub in our hotel, with live music and talented dancers.

Our final day in Havana brought a visit to a sculptor’s home studio. Her house was a gorgeous mixed of mid-century modern and coastal styles that was filled with natural light and open air living spaces. I loved this stained glass window.

2 thoughts on “Reflections and Snapshots from Havana”